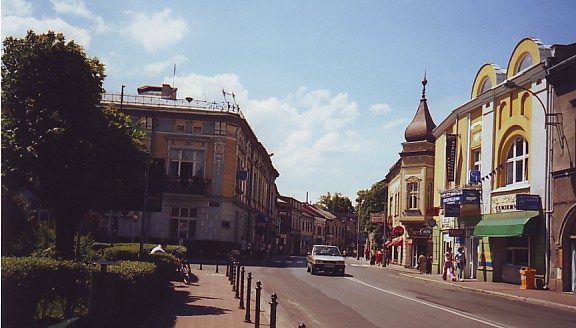 Brzesko. Street in the center of the square

Brzesko is located on the A4 highway between the two largest and most important cities in the Małopolska region: Kraków and Tarnów.
The A4 (E40) is the main traffic artery between central Małopolska through the Podkarpacie region to Jarosław and Przemyśl; from here the road continues over the Ukrainian border in the direction of L’viv (formerly Lwów). In the other direction (to the west) the main road via Katowice and Wrocław goes to the German border.
Brzesko is best known at national level for the traditional Okocim brewery.

Brzesko was granted commercial property rights in 1385, issued by Queen Jadwiga. The medieval town plan with the square square and the Gothic church of Saint James from 1447 is still preserved in the city center. The inhabitants of Brzesko made a living by crafts, trade and agriculture. In 1655, the city was occupied by Swedish troops. In the 18th and 19th centuries. the city's crafts and industry were developed and several guilds arose. In 1845, the brewery in nearby Okocim was founded by Jan Goetz, Julian Kodrebski and Józef Neuman. Also important for the development of the city was the railway line from Kraków across Dębica to Lwów, which passed through the city in 1856.
During World War II, in 1941, the Germans set up a ghetto in the city, gathering approx. 6,000 Jews. Some of these were murdered on the spot, others were taken to extermination camps. From the beginning of the war several resistance groups existed in the city; these later became subordinate to the Polish underground: Armia Krajowa. The groups took part in several resistance actions in the city and the surrounding area.
After the war, in 1950, the municipality began constructing new housing blocks in several places in the city, a development that particularly accelerated in 1960’s. In 1970’the 1980s’During the years, several new factories emerged in the city, as well as new school buildings, including a new high school. The biggest investments in recent years include the construction of a ring road and the construction of a sports hall and swimming pool. 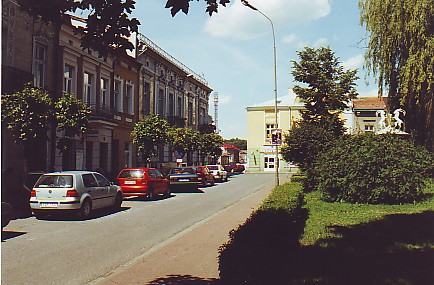 Center of Brzesko. The green area of the square is on the right

The city of Brzesko is proud of its historic heritage. The most important architectural monuments are Baron Goetz’s mansion and the Okocim brewery founded by him.
Church of Saint James (Kościół św.Jakuba)
This church, which is a parish church, was built in 1447. The building was renovated in 1863 and 1904. The admirable neo-Gothic altars and pulpit were built in Tyrol by Ferdinand Stufleser.
City Hall
by ulica Kościuszki was built between 1909 and 1910 by drawing by Gabriel Niewiadomski.
Okocim Brewery (Okocimskie Zakłady Piwowarskie)
The brewery in Okocim, a settlement / village on the southern outskirts of the city, approx. 2 km south of the city center, is the most interesting industrial building in the city and its surroundings, originally built in 1845 by the Goetz family. Jan Goetz, who immigrated from Bavaria, was the brewery's builder and first owner. The oldest building in the complex, the administration building, which also housed the owner's residence, was called earlier “the old mansion”. – At the beginning of the 20th century. Okocim was the fifth most important brewery in the entire Austro-Hungarian Empire. In 1943, the company introduced a new trademark whose motive was a goat's bee on a red background, and it quickly became one of the most well-known trademarks in the country. The company still holds an important position in the domestic market. From 1990, Okocim was a state-owned company. The brewery was the first in Poland to start the production of canned beer. As one of the first Polish companies, Okocim was listed on the stock exchange. From 1996, the Danish brewery Carlsberg was the most important investor in the company and from 2001 Okocim belongs to the Carlsberg Polska group.
The Goetz Mansion (Pałac Goetza)
The Goetz-Okocimski family's palace and park facilities are a gem among the historic buildings of Brzesko. It is a neo-baroque and neorococo style mansion and the only one of its kind in this area that has belonged to an industrialist. The mansion was built in 1898-1900 by Jan II Albin Goetz-Okocimski (1864-1931), a well-known industrialist, philanthropist, politician and owner of the Okocim brewery – and his wife: Countess Zofia of the Sumiński genus. The oldest part of the building was constructed according to drawings by the architectural firm Fellner & Helmer in Vienna. In addition to the mansion, the building complex also includes a guard building, a gatehouse with garden, orangery, horse stables and a building for the servants, all located in an extensive, picturesque park, held in English style. In the years 1908-11 an eastern part was added, after drawing by the Viennese architect Leopold Simony. Along the west side of the mansion stands a chapel with dome roofs. The wealthy industrial man's mansion was filled with magnificent furniture, fireplaces, ovens, crystal chandeliers and wall lamps, pictures, sculptures, copper pieces, old weapons, tapestries, carpets, glass, porcelain and hunting trophies. Much of this inventory is preserved to this day. The park around the mansion contains 55 different tree species.
Florian Monument.
The sculpture of Saint Florian in Brzesko was erected for the first time in 1731; after the fire in 1904, it was erected in the middle of the old town square. The Florian sculpture is the largest of its kind in the eastern part of the Malopolska region. Furthermore, it is in artistic terms among the very best and oldest sculptures in the region.
The parish cemetery
was built between 1785 and 1813. Many well-known local citizens are buried here.
The Jewish cemetery.
The cemetery was built in 1824. Famous Jewish rabbis are buried here. The tomb, which contains 200 Jews, murdered in 1942, can also be found here.
The military cemetery.
It is the cemetery that belonged to the military hospitals during World War I. The monument in the cemetery was created by Robert Motke. 507 people are buried here. 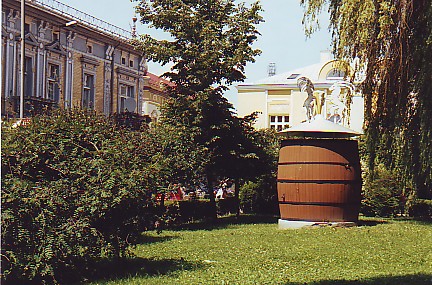 The green area of the square in Brzesko. A beer barrel, adorned with the goats, Okocim’s trademark, in this place symbolizes the importance of the brewery to the city.

Jadowniki (3 km east of Brzesko)
In the early Middle Ages there were a number of settlements and a fortified area belonging to the Wislaner tribe, which can be dated to the 9th-10th centuries. This fortification is one of the most important archaeological finds of that time. Remains of the 4-meter-high east wall can still be seen.
Szczepanów (about 8 km northeast of Brzesko)
This village is a religious center because a Polish saint, Saint Stanisław, was born here. The village's beautiful Gothic church dates from 1479.
Poręba Spytkowska (about 5 km southwest of Brzesko)
This village is one of the oldest of the villages surrounding Brzesko; it existed already at the end of the 13th century, when it was owned by the Knights of Leliwita. This genealogy created a parish here together with the first wooden church, the existence of which is confirmed by a writ of 1325.
Parish Church: The original wooden church – probably in the 16th century, at least before 1565 – was replaced by a walled church, consecrated to St. Bartholomew. The baptismal font is from 1620 and a Gothic crucifix from the 15th century. – The bell tower: Near the church stands the wooden built bell tower from the 16th century. This tower is one of the largest and oldest wooden towers in Małopolska. The solid beam structure is protected by a board covering on the sloping walls. The roof over the bell room is covered with shingles and has a fall to four sides. The tower holds three large bells, the largest of which is cast in 1639.
Czchów (about 19 km southeast of Brzesko)
Lake Czchów (Jezioro Czchowskie) (about 20 km south-southeast of Brzesko) is located in Czchów municipality and within the boundaries of Brzesko district; it is a reservoir of water in connection with the Dunajec River, and here it is possible to cultivate several water sports.

Booking.com
Brzesko (Official site of the city) – in Polish, English, German, Italian, Dutch and Russian. – With practical information for tourists

Eating Out:
Brzesko (Official site of the city) – in Polish, English, German, Italian, Dutch and Russian. – With practical information for tourists 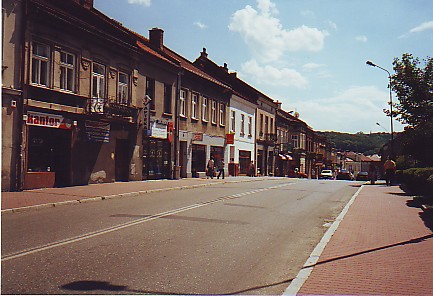 Street in the center of Brzesko 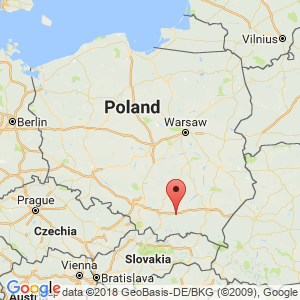