The castle ruin in Rytro

Rytro is located on the Poprad River in the Beskid Sądecki mountain region in southern Poland. The nearest major city is Nowy Sącz, 20 km to the north. A very scenic route leads the tourist through the Poprad river valley. The road begins in Nowy Sacz, passes Stary Sącz, where you meet Poprad, on through Rytro, Piwniczna-Zdrój and Żegiestow-Zdrój to Muszyna; From here the road goes north (but no longer along Poprad) to the spa town of Krynica.
It is believed that a castle-like fortification existed on the heights of Rytro as early as the 13th century, but the first document that certainly proves the existence of the castle (here called “castrum Knight”), is from April 1312. Rytro’s location in a place where Poprad’s race forms a narrow valley, made the high-rise castle easy to defend. The castle served for a long time, among other things. as a customs office. At the beginning of the 16th century. the castle was destroyed and it has since been left as a ruin.
In November 1770, a document was signed in Vienna on the incorporation of the Sącz region – including Rytro – into Austria-Hungary.
In 1914, a battle took place between Russian and Austrian troops in the area between Rytro and the village of Barcice (to the north), a battle that ended with Russian defeat.
In the interwar period, Rytro became a popular resort, a development that was interrupted by World War II.
Rytro today constitutes an independent rural municipality.

castle ruins .
The first castle was built of wood in the 13th century. The oldest walled building part is the cylindrical tower from the end of the 13th century. The castle ruin stands on a steep hill, 463 meters above sea level. The place is beautiful and worth a visit, also because of the magnificent view of the surrounding area. The tower is built of sandstone and has very thick walls; the preserved part has a height of 8 meters. The entrance to the tower is located high above the courtyard (for security reasons); in his day a ladder has been used to get up there. Along the edge of the mound stood a ring wall, parts of which are preserved. To the south was a tall building with sliding walls joined to the wall; parts of it are preserved. One entered the castle through a gate on the east side. The ring wall of stone and the residential building arose in the middle of the 14th century. It is known from a description in the mid-1500s that at that time the castle was quite included. In 1657, during the Swedish wars, the castle was destroyed.

Booking.com
Eating Out:
Gmina Rytro – with practical information for tourists 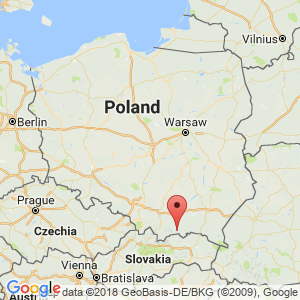