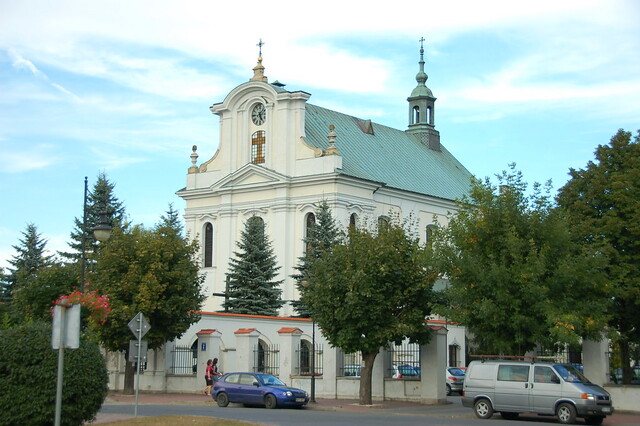 The Parish Church of Góra Kalwaria (The Most Holy Virgin Mary's Immaculate Conception Church). – Photo by: Krzysztof Belczyński on Flickr

In the 12th year. In the area of the present city there was a trading post which had arisen in connection with the crossing of Wisła. The first known record in written sources – from 1252 – mentions the locality as the village of Góra. The bishop of Poznań, Stefan Wierzbowski, acquired in 1666 the ruined village at this time in order to build a religious center here. The new town was granted commercial property rights in 1670 under the name Nowa Jerozolima (New Jerusalem), a name used until the 18th century.
The town plan in Góra Kalwaria, dating back to 1670’the eras, represents one of the most original urban foundations of Mazowsze from the Baroque period. The basis of the city plan is the Latin cross. The cross is formed by two axes, namely the streets of Kalwaryjska and Rynek – the axis that runs perpendicular to Wisła – and the streets of Dominikańska and Pijarska, which form the short cross arm. The central point of the city became the Kaplica Piłata (Pilate's Chapel), this place being the intersection of the cross arms. As an analogy to the plan for Jerusalem, the city plan was emphasized by the placement of three monasteries at the ends of the arms (to symbolize the gates of Jerusalem), that is, by the ways of the outpouring. The other elements of the religious complex were also introduced in analogy with the plan for Jerusalem – with the modifications that the local situation necessitated.
In 1796 – at the division of Poland – Góra Kalwaria came under Prussia. From 1815, the city belonged to Królestwo Polskie (the Polish Kingdom), who until 1832 had some autonomy – in personal union with Russia, but which was then incorporated as part of Russia. During the German occupation in World War II, there was initially a Jewish ghetto, which was abandoned in 1941, however, as the inhabitants were transferred to the ghetto in Warsaw. The city was liberated in January 1945.

Bernadinerklosteret .
The monastery complex, erected on the remains of a former church, was built following a project by Jakub Fontana in 1848; it was restored after destruction in 1915. Until 1864, the monastery belonged to the Order of the Bernardin; after 1952 the buildings belong to the order of the Marianas.
The Most Holy Virgin Mary's Immaculate Conception Church (Kościól pw Niepokalanego Poczęcia Najświętszej Marii Panny)
is in Baroque style, the interior in Baroque and Rococo style. The pulpit is from the 3rd quarter of the 18th year. (in rococo style) and St. Walerian’s black marble sarcophagus – in Baroque style – is from the end of the 18th century. In the crypt, the founder of the church and the monastery, Fr.Bieliński, is buried. The monastery buildings next to the church are in Baroque style and date from approx. 1755th
Antonius of Padua's Chapel (Kaplica św. Antoniego z Padwy)
in Baroque style is from the 2nd half of the 18th century. and is built on the river slope.
Holy Cross Church (Branch Church) “After Górce”
is Baroque-style and erected on an artificial elevation in the last quarter of the 17th century, founded by Bishop St. Wierzbowski as the so-called Pilate’ Town hall; The building is one of the central elements of the Kalwaria that occurred at the time.
Rector's Church (Kościól Rektoralny pw Opatrzności Bożej na Mariankach)
was founded 1674 by Bishop St. Wierzbowski.
Former Piarist College (Kolegium Pijarów)
was founded in 1675 by Bishop St.Wierzbowski. In 1819, the buildings were converted into barracks for the Russian army. From 1841 – after a rebuild – it was an old and handicapped room. In 1862 the site was again restored and rebuilt – by project of Henryk Marconi. In the area of the former college is the Neo-Gothic Chapel of Mary and a nursing home.
City Hall
is from 1829-34 and designed by architect Bonifacy Witkowski with additions by Henryk Marconi (the pillars of the columns). The building was restored in 1919-20. The town hall, destroyed during World War II, was rebuilt in 1950-51.
Former Peace Court (Sąd Pokoju)
is a building from the transition between the 18th and 19th century, the so-called “bispepalæ”. The building was the seat of the Czersk District Peace Court for a period in the first half of the 19th century. After 1845, it was converted into habitation. From 1958, the building houses the State Archives in Warsaw.
The former Kramboder (Kramy)
from 1836 was designed by architect Bonifacy Witkowski. Today, they are used in accordance with the original intention, being designed for shopping and service centers.
The Private Ethnographic Museum .
The museum is built on a hill where the Dominican Monastery formerly stood; whether the monastery still witnesses certain brick remains.

Czersk (2 km to the southeast) with the highly-regarded ruin of the Mazowsze princes' castle. – See the independent page: Czersk . 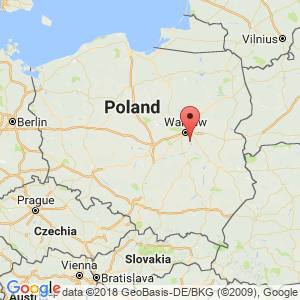