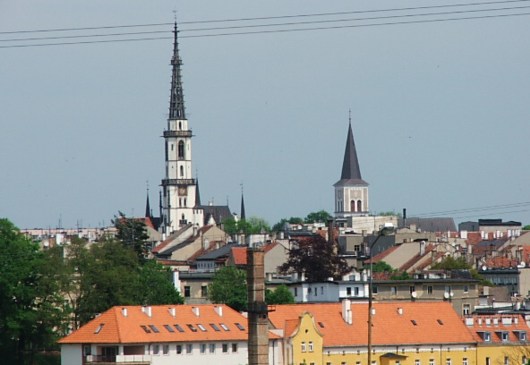 Ząbkowice Śląskie. Part of downtown seen from main road southwest of town. The tall tower on the left is the town hall tower.

Ząbkowice is located in the southeast of Lower Silesia, 67 km southwest of Wrocław.

Ząbkowice Śląskie emerged in the second half of the 13th year. The city received the first city privileges in 1298, including the right to store salt and lead as well as the right to trade within a mile of the city center. The city was also surrounded by a defensive wall of stone. At the beginning of the 14th century. the first ground-walled town hall was erected around which cloth stalls were built; during the same period the castle was erected. The Hussites attacked the city in 1428, during which a number of houses and churches burned down while damaging the city wall; however, the castle was not taken. In 1468, Ząbkowice was looted by army forces that traveled through the city. Twenty years later, Hungarian army forces entered the city again; later, after two months of siege, the castle was seized and destroyed. The reconstruction of the city lasted for many years and especially favorable to it was Prince Karol I Podiebradzki’s reign. This prince moved the principal's capital from Ziębice to Ząbkowice and rebuilt the ruined city. A city wall was built, four city gates were rebuilt or rebuilt and not least a new castle was erected. Unfortunately, the Thirty Years War became a new tragedy for the city. Several army forces passed through the city several times, with fires and other devastations as a result. This setback hampered the development of the city for a very long time. During a major fire in 1858, several buildings in the oldest district, including the town hall, burned, as well as severely damaged the parish church. At the end of the 19th and early 20th centuries. there was some economic boom. The first industrial companies emerged, thus a furniture factory and a hat factory. During World War II, no luck happened in the city. In the post-war period, the city developed into an industrial center, especially in the electrical engineering industry, just as the city was the center of one of the richest agricultural areas in the county. Today, Ząbkowice Śląskie is the administrative, economic and cultural center of Ząbkowice Powiat (district).

castle ruins (Zamek).
The first castle arose at the transition between the 13th and 14th centuries. The oval-shaped fort was an important part of the Silesian Piast princes' defense system, guarding the border with the Kłodzko area, which was then under Czech rule. During Bolek II of Ziębice, the castle was unsuccessfully besieged by Czech forces. At the end of the 1400s, the fortress was besieged by Hungarian forces for about two months and then captured and destroyed. The new castle arose in the same place in the years 1524-32. It was a Renaissance-style building, designed by the excellent Czech-German architect Benedikt Rejt. The castle was built of sandstone and natural stone over a square floor plan with a large courtyard, decorated with archways. In the southeast and northwest corners artillery bastions existed at a height of three stories. In the east wing was the square gate tower. In 1632, the castle was stormed 3 times by Austrian forces and eventually consumed due to the defenders' lack of food. In 1642, the castle was conquered by the Swedes, later again by the Austrians, after which the buildings were blown up. Since then, the castle has been a ruin. The relatively well-preserved exterior walls and the gate tower are noted today. Remains of the old castle from the 14th century can be seen in the south wall. A considerable part of the basements of the castle have been excavated and made available. In the castle area a music festival is organized every year.

St. Anna's Church (Kościół pw. Św. Anny).
The church was built in 1415. It is a Gothic edifice that has undergone some remodeling, especially in the 18th and 19th centuries, but most of the church is preserved in its original condition. There is a variety of valuable interiors, such as a Gothic sculpture by the Holy Anna Self-third, a Gothic pietà, a pulpit of sandstone with bas-relief of alabaster, etc. Outside the church, at the northern pillar of the sacristy, is a burial-plate for Wit Stwosz the Younger, grandson of Wit Stwosz , the famous sculptor, i.a. creator of the Mary altar in Kraków.

The Leaning Tower (Krzywa Wieża).
This tower was a former bell tower, built approx. 1413. By the end of the 16th century. the building got a slight slope, probably due to a smaller, local earthquake. During the Great Fire of 1858, the tower was partially destroyed, but it was rebuilt and added an attic in the form of dovetails. The Leaning Tower is a rare example of Gothic period building culture in the form of a free standing bell tower. The height of the tower is 34 m and the slope relative to the vertical axis is approx. 2 m.

City Hall (Ratusz).
The town hall was built in the 19th century. in neo-Gothic style at the site of the former town hall, which burned in 1858. The building has been basically renovated in 1990’and are the seat of the National Register and the Municipal Library.

Bymuren (Mury sources).
The city got its first city wall at the end of the 13th century. During Bolek II of Ziębice, the wall was expanded and in the 15th century. it was reinforced with brick towers. In connection with the wall were 4 city gates: the Wrocław, Ziębice, Kłodzko and idwidnica gates. The parts of the wall that have been preserved today are from Karol I’s time. The city gates are not preserved, but on the western part of the wall you will see attic decorations, and on the northern section is the so-called Duet Tower (Baszta Gołębia), which was later rebuilt and preserved as such to this day.

Holy Cross Church , the former Dominican Church (Kościół pw. Podwyższenia Krzyża Świętego).
Originally, the church was built in 1395-1402 after the Dominican order came to town; but already during the wars with the Hussites the building was destroyed. The present building arose in the 17th century. It is a wooden baroque-style church. The side ships form two chapels. To the north, the Franciscan Sisters monastery joins the church building.

St. George's Church (Kościół pw. Św. Jerzego).
This church was built in it the 14th century. and in his time belonged to the city's first hospital. The Gothic Choir contains valuable murals from the end of the 14th century. 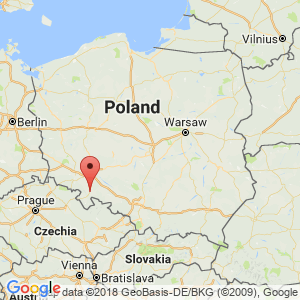