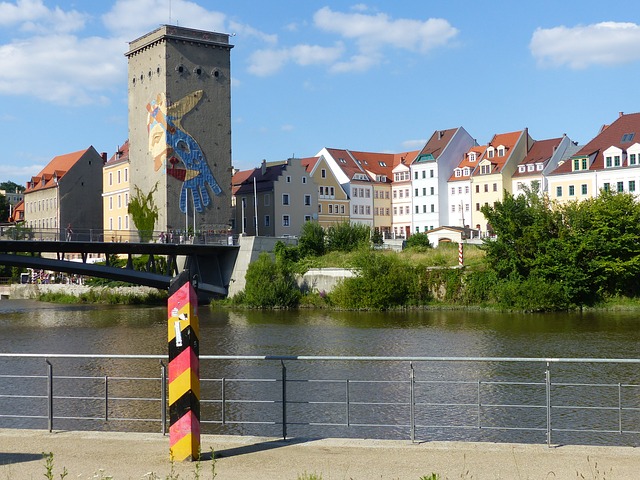 Zgorzelec. Buildings along the banks of the Nysa River. The bridge is the Old Town Bridge (Most Staromiejski, on the German side: Altstadtbrücke). – Picture of HerKle from Pixabay

Zgorzelec is located in the southwestern corner of Poland, on the east bank of the Nysa Łużycka River and thus at the border with Germany.

Oder-Neisse line:
At the Potsdam Conference in 1945 after the end of World War II, the Allied powers decided that the future border between Germany and Poland should extend along the Odra and Nysa rivers (Oder-Neisse line). This border crossing was approved by the GDR in 1950, by West Germany (subject to reservation) in 1970 and by the United Germany in 1992. The Nysa Łużycka River (German: Lausitzer Neisse or just Neisse) originates in the Czech Republic. From the point where the borders of the Czech Republic, Germany and Poland collide, and to the north the Nysa River forms a border between Germany and Poland. Nysa has its outlet in Odra (Oder). From this confluence and northwards the boundary of Odra is formed. North of Schwedt / Oder (Germany), Odra divides into two branches, one western and one eastern branch. From here, the border follows the western branch. North-west of Gryfino, this branch (also) goes northeast to Szczecin, while the border is separated from the river and moves in a more direct northern line until it reaches the Baltic Sea west of Świnoujście. This demarcation has meant that several towns along the two rivers have been divided into two, one German on the western bank and one Polish on the eastern bank. This applies to Frankfurt / Słubice, Guben / Gubin and Görlitz / Zgorzelec.

Zgorzelec and Görlitz therefore have a common history before 1945 under the name Görlitz. The German name, moreover, is of Slavic origin, a Germanization of a former Slavic name.
The historic region where Görlitz / Zgorzelec is located is called in German Lausitz (Polish: żużyce) and is divided into upper Lausitz (ty. Oberlausitz, upper sorb. Hornja Łużica, pol. Łużyce Górne) to the south and Lower Lausitz (ty. Niederlausitz, nedersorb.Dolna Łużyca, pol. Dolne Łużyce) to the north. This region has since the 6th year. been inhabited by a West Slavic people, the Sorbs. Their languages are divided into Upper Sorbian and Lower Sorbian. Today, there is only a small minority left, but the language and culture still exist.

Görlitz (Upper Sorbian: Zhorjelc, Polish: Zgorzelec) is known by various names throughout the ages. The first written mention of the city (in Latin in 1071) uses the name Villa Goreliz. Since then, the following names have been used over the centuries: Yzcorelik, Gorliz, Goerlitz, Gorlicz, Gorlicze, Gorlitzsch, Gorlytz, Gorlicium. Then Görlitz. Until 1946, the district on the east bank was called Ost-Görlitz. From the Polish side, the Polish town on the east bank was called Zgorzelice from 1945-1946. From 1946 the name is Zgorzelec. In this description, the entire city will be called Görlitz until 1945, after which the description will apply to the Polish city, Zgorzelec. 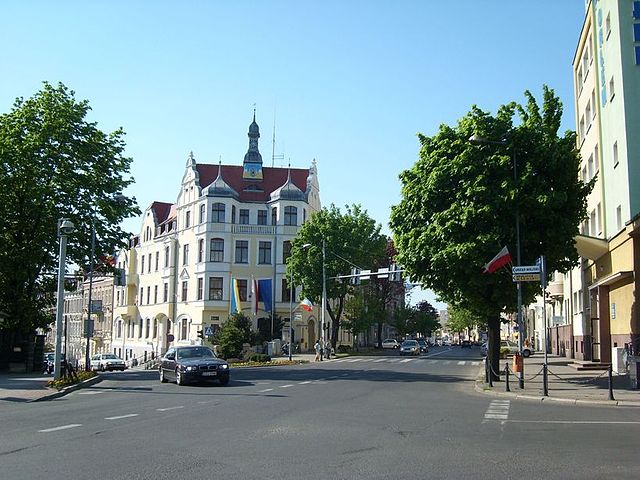 Very early in history, the area was inhabited by several West Slavic tribes, referred to in the middle of the 9th century. Between 871 and 894, the area was part of the Great Moravian Empire (Veľká Morava), a large Central European kingdom with centers in the present Czech Republic and Slovakia, which existed from 833 to ca. 907. At the transition between the 10th and 11th centuries. the fortress of the Sorbs and parts of the later Lausitz were conquered and incorporated into Poland by Prince (later King) Bolesław Chrobry. As mentioned above, Görlitz is first mentioned in the sources in 1071, namely in a document issued by Emperor Heinrich IV. In 1076, the settlement and the eastern part of Upper Lausitz were incorporated in the Czech Republic. The Czech prince Soběslav I in 1131 had a castle erected on the Nysa River.
Its importance for the development of the city was its location in a place where two important trade routes in modern Europe were crossed. In the 12th year. a trading post arose on the left bank of the river; Here was also built a church, dedicated to Saint Nicholas. In ancient times, there was no bridge over Nysa, but there was a wad that was located a little north of the present Wrocław street in Zgorzelec. Around 1220 Görlitz had become an actual city. By the end of the 13th century. Görlitz (but only the oldest part of the West Bank) was surrounded by a city wall. In 1303, the city gained market town rights. About 1329 Görlitz got his own judicial system. the right to strike coins and the right to store salt.
At the Prager Peace in 1635, Görlitz, along with the rest of Upper Lausitz, was incorporated into the Saxon Principality of Saxony. In 1815 Görlitz became Prussian and became part of the province of Silesia. The first clothing factory was set up in 1816. In 1847, the city was connected to the Saxon and Prussian rail networks. In 1869, Görlitz Aktiebryggeri was started. In 1900 the population increased to 81,000. A new municipal hospital was opened in 1905. In 1925 an airfield was opened at Görlitz. After World War II in 1945, the city is divided into a German and a Polish part – separated by the river Neisse (Nysa).

During World War II 1939-1945, in the eastern part of Görlitz (Zgorzelec) there was a prisoner of war for officers and men of different nationalities (Stalag VIII A). Ca. 100,000 prisoners stayed during the war in this camp. Several thousands perished here, especially Soviet and Italian prisoners. In April 1945 there were bitter fighting near Zgorzelec. Divisions of the SS blasted all bridges over Nysa into the air. When the new border after the war was set to run along Nysa and Odra, the German inhabitants of the now Polish district were expelled to Germany. On July 6, 1950, the new border demarcation was recognized by an agreement (in Zgorzelec) between the GDR and Poland (called the Zgorzelec Agreement). After World War II, a large number of Greek and Macedonian refugees settled in Zgorzelec, including people fleeing the Greek civil war. In the early 1960s’A large lignite bed was discovered near Zgorzelec where, a few years later, coal mining began. 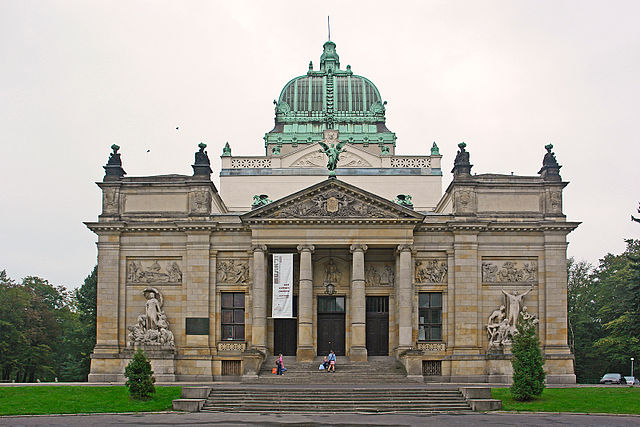 The castle in Zgorzelec
built in 1730.

The Municipal Culture House
listed in German Neobarok. Often used for theater performances in the city. In this building, the Zgorzelec agreement between the GDR and the PRL was signed in 1950.

The museum
The Muzeum Łużyckie (Lausitzer Museum) was opened in 2007, showing the history and culture of the upper Lausitz section on the eastern side of Nysa.

The Church of John the Baptist
erected after the year 1900.

Memorial to those killed in Stalag VIII A prison camp

War Cemetery
for the perished from the Polish 2nd Army.

Parker
There are several parks in town. The two largest are Park im. Andrzeja Błachańca at the Cultural Center and Park Ujazdowski. The two parks are connected by a footpath that runs along the river and under the viaduct.

Most Staromiejski / Altstadtbrücke
The bridge connects the two cities (former districts) on each side of Nysa. In this place there has been a bridge connection for many years (the oldest bridge connection between the boroughs). In May 1945, the bridge was blown up. The current bridge is typically an arched bridge with steel construction. The bridge was opened as a pedestrian bridge in October 2004.

Most Jana Pawła II / Reichenbergerbrücke
South of Most Staromiejski is found Most Jana Pawła II, built in granite in 1875. In May 1945 – like other bridges in the city – the German army was blown up. After 1945, the rebuilt bridge was the border crossing between the GDR and Poland. The bridge rests on 4 pills, two of which stand in the water.

The railway bridge
At the southern end stands the railway bridge. It was built in 1847 and is an arched bridge of stone (granite). The length is 475 m. With 30 bridges. It was rebuilt after the devastation of the war and was completed in 1954.

Görlitz
It is almost necessary for the tourist with an excursion to the German city, Görlitz, on the other side of the river. Here is the beautiful old town, whose history is common to the two districts.

road access
Immediately north of Zgorzelec, the A4 (E40) motorway crosses the border with Germany.

Zgorzelec (The official site of the city in Polish, English, German) 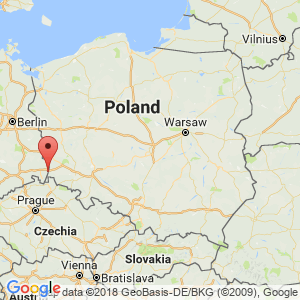