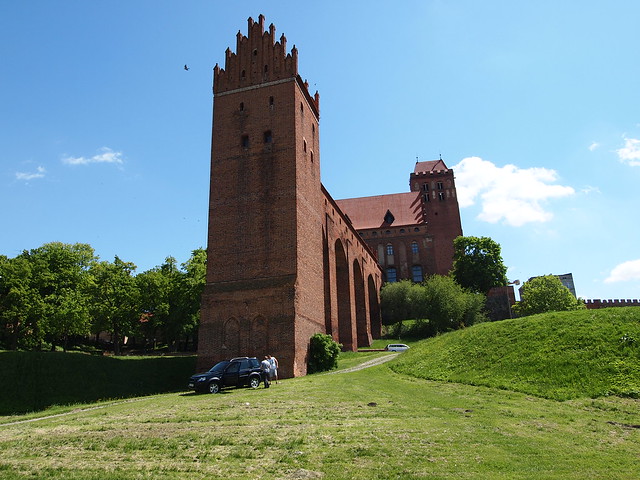 Castle of Kwidzyn. Forrest Gdanisko Tower and the connecting bridge. – Photo by Tomasz Przechlewski on Flickr

Kwidzyn is located in northern Poland, south of Gdańsk and near the Wisła River. Today, the suburb of Korzeniewo is on the banks of the river itself. The Latin name of the city was Kwedis, Quedin or Quedzyn, in German times it was called Marienwerder. Unofficial from the interwar period and officially from 1948 the name has been Kwidzyn.

The Pomesans, a Prussian tribe, had a fortified settlement here in the 11th century, called Kwedis or Quedzyn. Probably the settlement was destroyed during the fighting that took place in the area. But in 1233 the settlement was founded again by the Order of the Crusader.
Shortly thereafter, presumably in 1235, the settlement gained market town rights. In 1243 the city was destroyed during the battles between the Prussians and the Crusaders, but the Crusader order rebuilt it. In 1254, the city became the capital of the Pomeranian diocese and in 1285 the parish church gained the rank of cathedral.
In the 14th century. the castle and cathedral complex was built north of the medieval city. From 1336 the town had the name Marienwerder. In 1440 the Prussian Confederation arose here.1628-1635 the city was occupied by the Swedish army. An extensive fire ravaged Kwidzyn in 1710.
After Poland's first division in 1772, the area was part of Prussia and Kwidzyn became the capital of the southern part of the province of West Prussia. In 1798, two wings of the castle were demolished, namely the south-east (also called the south) and the south-west (also called the west).
In 1847 the first highway was built from Kwidzyn to Malbork and in 1883 followed the Malbork-Kwidzyn-Grudziądz-Toruń railway link.
In 1920, a referendum was held, the result of which was that Kwidzyn remained in the German Empire. In January 1945, at the end of World War II, German inhabitants fled west, and the Soviet army occupied the city. In their westward march the army allowed the old town to burn.
By the 1999 administrative reform, Kwidzyn became part of the Pomeranian county.

The castle chapter – The Cathedral – The City Museum
With its magnificent architecture, size and location, this building complex, comprising the existing parts of the castle as well as the cathedral, is undoubtedly the biggest attraction in the city. It is one of the most special and impressive examples of Gothic architecture.
Borgen:
The castle was built in the first half of the 1300s as a four-winged complex. To the original freestanding southeast wing, the cathedral was later added so that the castle's facade to the southeast was covered. To the north / northeast of the main castle was a very large concourse, a square space with various economy buildings: stables, barns, cereal warehouses etc. In addition to practical purposes, the concourse also had to protect the castle to the north. The main castle and the concourse were separated by a moat, but were initially cursed by a long stone building (not preserved) that led all the way to the main gate of the castle. Only a few remains are left of the concealment.
The main floor plan of the capital was square and the length of each side wall was just under 48 m. Originally, there were 3 corner towers, of which only the north and east are preserved to this day. Preserved is also the powerful main tower in the southern corner. The walls of the castle are built of bricks laid in Gothic, but the walls of the basement and the foundations are built of field stones.
The sanitary installations in the medieval castles were most often confined to so-called “secrets”, tiny spaces that were built to a certain height on the outside of the castle wall, and from which stools, etc. could fall directly into the moat. In some places, such as here in Kwidzyn, a tower was built for this purpose, a so-called gdanisko, that is, a latrine. In a slightly oblique line, a bridge – 54 m long – led from the 2nd floor of the castle's northwest wing and over to the upper part of the tower – which is 25 m high and built on a lower ground than the rest of the castle. The bridge, which has a protected passage at the top, rests on 5 large bridges (arcades) and is built of bricks. However, the tower also had defensive purposes – advanced as it was in relation to the castle wall – and it was therefore equipped with slots. In the 19th century. the tower and the passage above were used as a prison. Today, the passage is taken into use for the ethnographic museum. The tower and the bridge are one of the most beautiful examples of this type of architecture. The bridge is also the longest of the preserved bridges of this kind. Today, a street (Gdańska) leads under the penultimate bridge arch.
Ca. The well tower stands 18 m from the castle's northeast facade. It is, like the sanitary tower, connected to the castle wall via a protected passage at the height of the 2nd floor, which rests on bricks pebbles. This tower was of great importance, because here was the well and thus the water supply to the whole castle. In the middle of the 19th century, this tower was built for imprisonment, but has since been partially restored and restored to its original appearance.
In 1798, the castle's southeast and southwest wings were demolished. At the gable on the northwestern wing are now 2 historical cannons.
Borgmuseet (Muzeum Zamkowe)
From 1926 the buildings contained the Heimatmuseum Westpreussen. In 1949, the castle was taken over by the Ministry of Culture and the Arts and the following year a decision was made to organize the castle into a Polish museum – with the museum objects taken from the German museum. Today, all building elements form a large museum: the Borgmuseet. Here, the castle's functions and interior are demonstrated and there are also exhibition halls with art, crafts, natural history, etc. 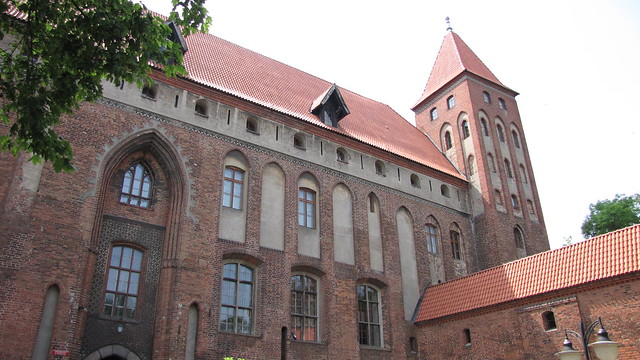 Kwidzyn. The northeast wing of the castle. – Photo by Marcin Polak on Flickr

Cathedral:
Construction was probably begun on 1334 when construction of the castle was more or less completed. The builder in relation to the building of both the castle and the church was the chapter in Kwidzyn. In the mid-1300s, all members of the chapter as well as the bishop were also brothers of the Order of the Crusader.
The church building is 86 meters long; it is not oriented directly east-west, but rather southeast-northwest, with the west end parallel to the (original) southeast wing of the castle. At the southern corner of the church stands the large defense tower (main tower), which at the same time served as a bell tower for the church. This tower is 59 meters high.
The cathedral consists of a three-ship main body and a multi-sided, one-ship choir. On the church's side walls – at the transition to the choir – you will see 2 small towers, one on the southwest wall, the other on the northeast wall. On the inside of the walls there are at this place two narrow stair towers leading up to and into the choir. The vaults in the ceiling of the church are supported by powerful pillars that turn into pointed arches.
The entrance to the church is from the southwest side.
In the excavations one has in the crypt under the church, among other things. found burials with skeletons belonging to three persons, all identified as Grand Masters of the Crusader Order. This was an archaeological sensation worldwide.

Bymuren
There are still fragments of the city wall from the 14th century.

Town Hall Tower
Ruins of the Town Hall Tower, built in the 14th century.
The town hall of the medieval city was erected on the square at some point before 1336. After a fire, it was rebuilt in 1878-80 in the neo-Gothic style to which came the Gothic tower. The town hall was destroyed in 1945 and the only remaining two floors of the town hall tower. In addition, the basement was excavated in 1973.

barracks
The Neo-Gothic Barracks Building from 1877-79.

Fermor Mansion
Listed in the area of the medieval suburbs in 1758-63 as the headquarters of General Villim Fermor, general of the Russian army during the 7-year war. It was expanded in the late 18th century and appeared in a classicist style. The mansion now forms the setting for one of the city's business schools.

North of the suburb of Korzeniewo, a bridge leads highway # 90 across the river Wisła. The new bridge was opened in 2013 and is of the type extradosed with two crossing subjects.
In the past, Wisła had a major impact on the city's economy, transporting timber and other goods up the river, primarily to Gdańsk. 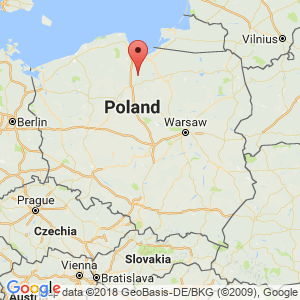