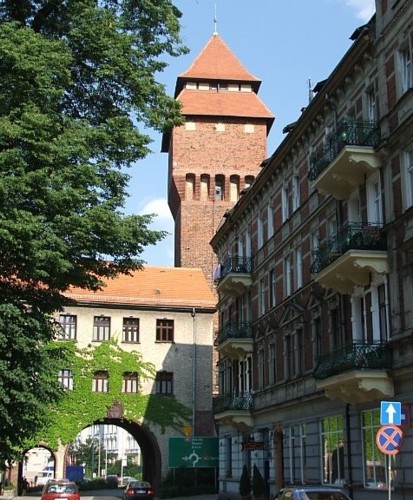 Kluczbork. The regional museum and the former castle tower, later the water tower

Kluczbork is located in the northern part of Opole County (Silesia). In terms of traffic, the city is a local hub, with 5 main roads and several smaller roads going to all corners of the world. To the northwest, the highway goes No. 42 (towards Wrocław), No. 11 goes to the north (Poznań), No. 42 and 45 to the northeast (Łódź), No. 11 to the southeast (Katowice), and No. 45 to the south (Opole) .
The town's history dates back to 1252, when the then small settlement became Wrocław Prince Henry III’s property. In 1253, the prince of Wrocław gave the Order of the Knights with the Red Star the right to found a city and a market on the spot; the city was named Cruceburg, later Kreuzburg (after the German name of the order). According to some sources, however, the order did not establish the city itself, but probably some villages around it, giving Prince Henry IV Probus the opportunity to take the city under his protection and found a market town on the ground by virtue of the privileges he issued in 1274. The next For 400 years, the town belonged to various Silesian princes. During the Hussite wars, the Hussites ruled Kluczbork with the support of the inhabitants. From 1536, Kluczbork belonged to the Brzeg princes until this line of the Piast genus became extinct. During the 30-year war, the city was plundered several times by various army forces. From 1675 the city came under Austrian rule. After 1740, Kluczbork, with all of Silesia, belonged to Prussia; thus began a comprehensive Germanization of the entire Silesian area. In 1816, Kluczbork became the capital of a district. In the middle of the 19th century. a number of roads and railways were built, making the city a railway hub in the northern Opole area. An evangelical teacher seminar was opened to educate both Polish and German speaking teachers.
Generally, Catholics, evangelical believers, and Jews lived together peacefully in the city. A hospital was inaugurated in 1848, a municipal gas plant in 1867, a new post office in 1891, and a courthouse in 1895. At the end of the 19th and early 20th centuries. There was a significant increase in industrial companies such as breweries, printing, spinning, sugar factory, brickwork, a modern slaughterhouse, a furniture factory and a company that manufactured metal products. After 1907 the municipal water supply and sewerage were developed and some time later an electricity plant was built on the Stobrawa river. Between 1921 and 1945, Kluczbork was located within the borders of the German Empire. Soviet armies occupied the city in January 1945, and the Polish authorities took over the city's government on March 18, 1945. After the administrative reform in 1998 (again), Kluczbork is the center city of a district. 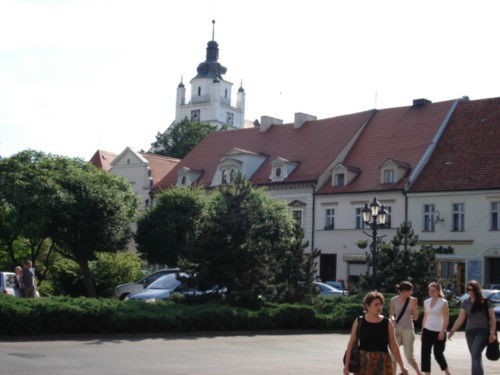 Kluczbork. Lot from the square. In the background the Tower of the Savior Church

The castle / water tower / regional museum
In 1396, Prince Henryk von Lüben stated in a document that Kluczbork was a fortified settlement with walls and walls – and with a probably quite significant castle. A more secure record of the castle dates from 1581. Towards the end of the 17th century. the castle was left in ruins. In 1720 the building was rebuilt to seat the imperial administration and a second floor was added in 1854.
In 1907, the former brick tower, erected in brick, was converted into a water tower. In this connection, a tent roof was added in 2 levels.
The Jan Dzierżoń Museum in Kluczbork began its business in 1959 as a branch of the Opole district's Silesian Museum in Opole. In 1962 it became an independent regional museum. The museum was housed in the building erected on the foundations of the castle and located at the city wall, near the city gate called Brama Polska or Brama Krakowska. To the south, the building was adjacent to the former castle tower, which after 1907 served as a water tower. In 1931-32, a street was led into a tunnel under the building. The museum presents the culture of the northern Opole region, thus archeology, history and ethnography with special emphasis on the development of beekeeping. Jan Dzierżoń, whom the museum is named after, was a pastor with great interest in and knowledge of beekeeping, in which area he made important inventions.
(See photo at the top of the page),

Bymuren
In the Middle Ages – probably in the late 14th century. – defense walls were erected around the city, built in Gothic bricks in Polish compound; the walls rested on a stone foundation. However, the city wall only protected the city from three corners of the world, as there were wooden palisades to the north as well as a moat and natural obstacles in the form of swamps and other wetlands. Today, the walls are mainly preserved in the southern part of the city.

The square / Town Hall
The streets leading from the four corners of the rectangular square, in their time, ran along the two, no longer existing, gates. The gate to the east was called Brama Polska (Polish Gate), while the western gate was called Brama Niemiecka (German Gate). In the middle of the square, which for many centuries served as a commercial square, stands the town hall, built in the 18th century, together with two houses with double facade. Today, the two houses are the only existing of two rows of houses, with every six houses built during the early Baroque period, ie a total of 12 houses. Unfortunately, the ten of the houses were completely destroyed by a fire in 1925, with which a very characteristic element of the city's architecture disappeared. In 1926, according to drawings by a local architect, a building was made up of archways with a balcony at the top; the new building was adjacent to the remaining houses to the west. 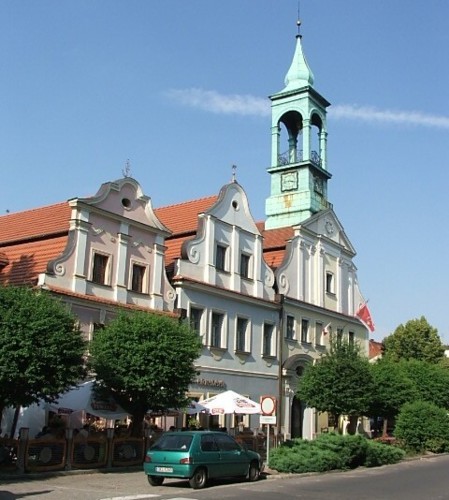 Kluczbork. City Hall and the other two houses in the middle of the square – seen from the south 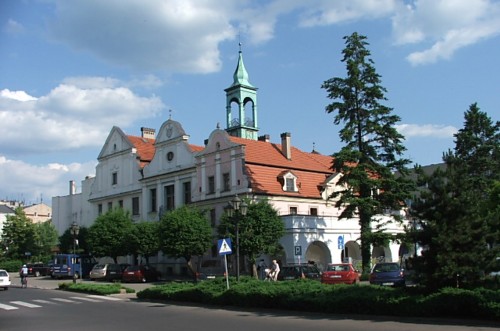 Church of the Savior (Kościół pw. Zbawiciela)
One of the most valuable building memorials in Kluczbork is the Gothic Savior Church, belonging to the Evangelical-Augsburg congregation and erected in the 14th century. instead of the former wooden church mentioned in sources dating back to 1298. The church was left in its time by Prince Henry IV of the Order of the Red Lords of the Crusaders with the Red Star’s custody, and so it continued until the order was repealed in 1810. The church building is walled with natural stone and bricks; the wall is only partially limed. The building consists of a three-story choir (in early Gothic style, a three-story main ship and a side ship separated from the main ship by columns. On the south side of the choir is the sacristy and on the north side of the building there is a porch with access from the tower. The windows of the church are pointed arched The entrance portal of the west wall is also curved The top floor of the tower was built in 1795- 97. During the summer season organ concerts are held in the church with the participation of well-known musicians from abroad and abroad.
The cemetery served in the years 1708-1769 as a cemetery for the Protestant congregation.
The church's watchtower, from which you can enjoy the view of the city and the surrounding area, is available to tourists from May to September, but only for short periods during the week. 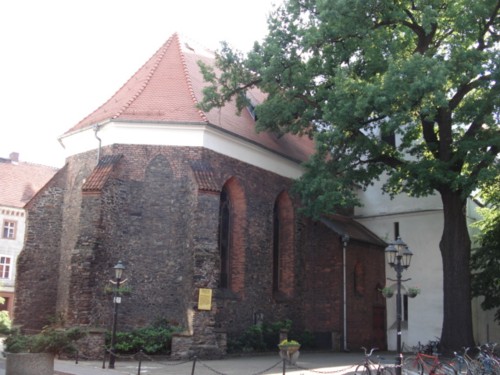 Kluczbork. The Church of the Savior viewed from the choir

The Poor (Zakład dla Ubogich)
The former farmhouse is a monumental – by local scale huge – classicist-style building located in the city's northeast – unfortunately not in the best preservation condition. The building is constructed in an oblong rectangular shape with two sides, so that the floor plan of the building complex resembles the letter H. Fattiggården was built after 1776 at the request of the Prussian King Friedrich II der Grosse and according to drawings by the architect Carl Gotthard Langhans. The building was erected near the city wall at the site of the Order of the Red Lords with the Red Star’s Grand Master previously had his domicile. The poor farm was inaugurated in May 1779 and could accommodate 500 poor people, war invalids, homeless people and beggars. From 1804 a hospital operated on the site. After a fire in the main building, the complex was rebuilt in 1820-23 with certain modifications and architectural simplifications. Subsequently, the building was taken over by the Silesian provincial authorities and in 1874 was taken to a hospital for the mentally ill. This hospital operated until its closure by the Nazi authorities in 1936. In December 1939, a prisoner of war camp was created for officers – the first of this kind of camps in Silesia – called Oflag VIII A Kreuzburg. Furthermore, from the spring of 1943, the building was the setting for an internment camp for citizens from countries at war with the Third Reich, called Ilag VIII / Z. After the war, some rebuilds were made; there were boarding school and magazines in the buildings.

Bąków (about 6 km southeast of Kluczbork)
The Church of the Blessed Virgin Mary (Kościół pw. Wniebowzięcia Najświętszej Maryi Panny) is a wooden church that is one of the most interesting in this region. The church was built at the transition between the 15th and 16th centuries. About 1550 it was taken over by the Protestants and rebuilt; from 1945 it is again a Catholic shrine. The church is in the late Gothic style, it is a log house erected on a brick foundation covered with boards. The interior of the church is remarkable, especially the main altar with its Gothic triptych from 1370, which is almost 3 meters high.
Bąków Tourist and Holiday Center (Ośrodek Turystyczno-Wypoczynkowy w Bąkowie)
The tourist and holiday center, which is open from June 1 to September 30, is the most attractive holiday center of its kind in this part of the Opole region. Here is a campsite, a lake with the possibility of swimming and kayaking, tennis court, basketball court, restaurants, playgrounds and more.

Kuniów (3 km south of Kluczbork)
The Old Blacksmith and the Old Bakery (Zabytkowa kuźnia in Piekarnia). In the village of Kuniów is preserved a forge and a bakery from the 19th century. These cultural monuments are now – together with a regional museum – part of a Center for Regional Remembrance and Crafts, set up at the initiative of the Society for the Development of the Village of Kuniów, which also receives support from the EU. In the forge special forges “Kuniów horseshoes” in an original brick oven and with the use of original tools from the 19th century. In the bakery there is also the possibility for guests to try kneading dough for old recipes, pour it into the mold and bake it in the oven. It then becomes one ““Kuniów-bread“which afterwards can be enjoyed at the cozy tables surrounded by old exhibits. The smithy and bakery are on the road between Kluczbork and Opole. 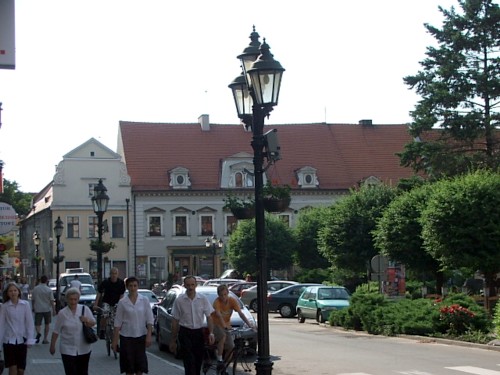 Kluczbork. The west side of the square 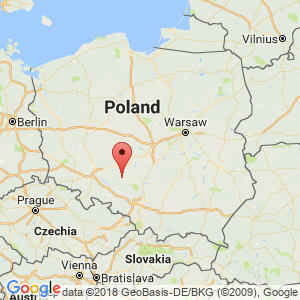