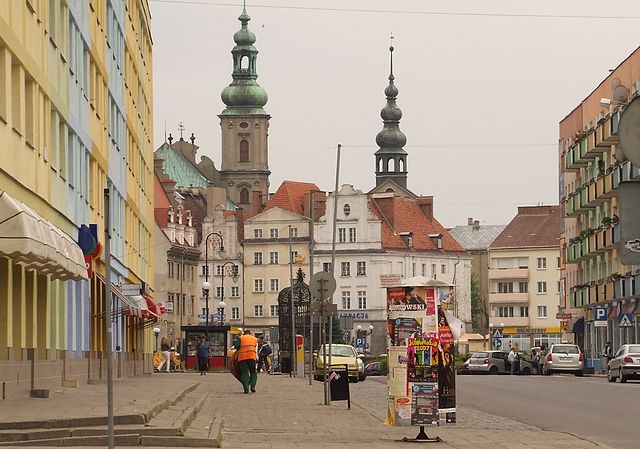 The town of Nysa is located on the Silesian Low Plain, north of the Sudeter Mountains, in the Nysa Kłodzka river valley. 22 km2. An important element of the city's life is the short distance to the Czech Republic, which entails extensive cooperation and lively exchanges, both in trade and tourism, and which has a favorable effect on the city's turnover.

In the Middle Ages, the bishops of Wrocław owned Nysa and the whole area around it. This relationship with the diocese's seat lasted until 1810, when the Prussian king conducted a secularization of the church's properties. Already in the Middle Ages, the bishops of the city resided, testifying that in 1260 they had their own castle here.
In the 12th and 13th centuries. moved a greater number of Dutch-born settlers eastward through the German territory; quite a few settled in Nysa, and these Flemish, who were specialists in drying and cultivating wetlands, proved very useful in Nysa, located in an area that was often flooded. In addition to Flemish people, the city was also populated by many Germans during this time. The original Polish population usually belonged to the poorest strata of the city.
In the middle of the 14th century. Wrocław Bishop Przecław paid for the building of defense walls around Nysa along with several gates. Today, only two of the city gates are preserved; the city wall was torn down in the 19th century. In the 14th century. Nysa was one of the most important cities in Silesia known for trade and crafts. In the Middle Ages, the church provided for the establishment of several hospitals and nursing homes in Nysa. The existence of a parish school in Nysa is mentioned already in the year 1300. In 1555 the first printing press was established.
Nysa was part of the Habsburg Monarchy, which over time exerted a significant influence on the development of the city.
The Thirty Years War (1618-1648), along with the plague, led to the fall of the city. Nysa fell victim to the war three times. In 1632 the city was plundered by Saxons and Danes. In 1642, the Swedes would destroy the defenses and set fire to the defense towers. The fire spread rapidly to the whole city. Only by a miracle – a sudden and heavy rain – did the fire go out.
The brutality of the war led to a complete breakdown of urban life in Silesia and at the same time brought to life a religious fanaticism. This fanaticism showed in Nysa in the form of witch processes. In the years 1650-51 in this city alone, 33 women and 9 girls were convicted of contact with the devil and witchcraft and therefore burned at the stake. 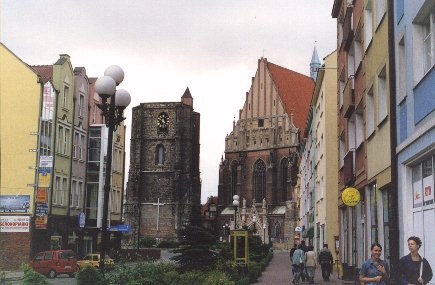 The thirty-year war had shown that the city's defense system was too weak. Subsequently, many efforts were put into strengthening it against new dangers. a dreaded Turkish attack.
The end of the 17th and the beginning of the 18th century. was again a rich boom period for the city. The bishops' favorable political and economic rule made Nysa one of the largest cities in Silesia.
In 1741, Nysa was besieged by the Prussian army, which began a bombing of the city. In total, around 3000 bullets and 1200 bombs were fired. Nysa now came on Prussian hands.
In 1757, the Austrians attempted to conquer the city, causing new destruction of the city. The Silesian wars meant that Nysa now remained in Prussian / German hands, a condition that lasted until 1945.
Prussia made the city a fortress – a city with barracks and thousands of soldiers. Nysa became a military support point where the bishops of Wrocław no longer had much to say.
In 1807 – during the Napoleonic Wars – Nysa faced siege for four months. The siege left the city in ruins.
The secularisation of the church's properties in 1810 meant the end of the diocese of Nysa.
The 19th century. brought about major changes. Several industrial enterprises emerged, the school system was developed and in 1852 a theater was established that operated until the end of World War II. In 1878 the railway and a railway station were built. In 1888, sewerage and water supply were completed. In 1894 a large park was built in the city. At the beginning of the 20th century. a power plant was built and in 1920 a municipal stadium.
The city did quite well in the interwar period, but in 1938 was hit by a flood disaster.
However, the biggest tragedy in the city's history was the devastation of World War II. In March 1945, the city was bombarded and destroyed as a result of the siege of the Red Army. The city was to be defended as a fortress from Germany and thus became the object of bitter fighting. About 80% of the city was destroyed, and Nysa is thus one of the most affected cities during World War II.
In 1946 the remaining Germans were expelled from Nysa and in their place were introduced Poles displaced from the Polish eastern regions. The city was rebuilt, but many buildings could no longer be restored.
In 1997, Nysa experienced a new flood. 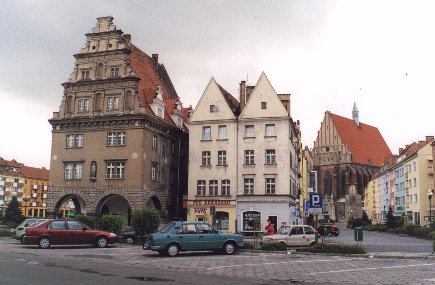 St. James and St. Agnieszka's Church . Church history goes back as far as the city of Nysa’The history of the present-day Gothic church gained the church in the years 1424-30. The unfinished bell tower next to the church dates from 1477-1516; the height of the tower is about 60 m (planned height was 120 m).
“The beautiful well” (“Piękna Studnia”) is one of the former city wells; It is covered with a beautiful forged iron grille, made by Wilhelm Helleweg 1686.
The Evangelical Church (formerly the Church of Saint Barbara) is a Gothic building with Renaissance and Baroque style additions. It originates from the transition between the 14th and 15th centuries. The church was originally the chapel of St. Barbara's Hospital, the oldest hospital in the city.
Citizens house on Teatralna street (the so-called Kanonia) in the late Renaissance style, with distinctive twin headboards.
city Theater (the now Nysa Kulturhus) was built in 1852. The building was destroyed in 1945. After the reconstruction started in 1980.
Bymuren (remnants of the wall) at D.Chodowiecki street. It is one of the numerous ruins of the Middle Ages; dates from the middle of the 14th century.
“The old Commander's tour” (“Stara Komendantura”) is a three-story Baroque-style building from the 1st half of the 18th century. 1743-1873 the building was the seat of Prussian commandery and from 1915 to World War II there was a museum here.
The Diocese (Dwór Biskupi) . The bishops' former residence is a complex of Gothic and Baroque-style buildings, partly with defense facilities. The diocese has been expanded and rebuilt over the centuries. Preserved are remains of the defense walls and Gothic defense towers from the 14th century. The current main building dates from the 17th century.
Bishop's Palace (Pałac Biskupi) (now museum) is a Baroque-style building, created in 2 stages. From the first stage the three wings originate (from 1670’erne), from the second phase the fourth wing (1729), separately composed and of its own style. The museum contains interesting collections of arts and crafts as well as archaeological collections.
Saint Anna Seminary (now the State Music School) is the oldest preserved part of the Jesuit complex. The building was built in 1656-57 and is an interesting example of early Baroque. Following the secularisation of the church's properties, the building became a hospital (1802) and in 1809 a weapons factory was set up here.
St. Mary's Ascension Church (ex-Jesuit church) is part of the former Jesuit complex. It is the first sacred building of the Jesuits in Silesia, built 1688-92.

St. Peter and Paul's Church . This is the most beautiful Baroque church in Nysa (1720-27) with rich decorations and fixtures. The church includes a monastery building from 1708-13.
Collection of townhouses at Bracka Street and on the square : carefully and beautifully reconstructed Renaissance / Baroque style buildings.
Town Hall (Dom Wagi Miejskiej) (now public library) is a symbol of the flourishing trade of Nysa. It is an impressive building from 1604, built in the Northern Renaissance style. 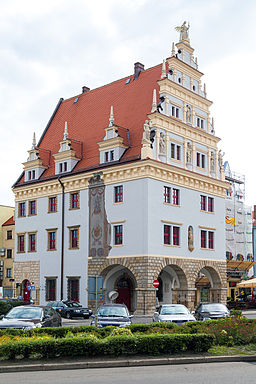 Fontanna Trytona . This fountain from 1700 – 01 is made according to the pattern of the Italian “Fontana dei Tritoni” by Bernini.
Wrocław Gate Tower (Wieża Bramy Wrocławskiej) with remains of the city wall. The tower was built in 1351 as part of the city's medieval defense facilities. 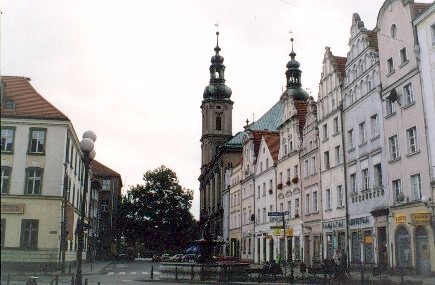 Nysa Recreation Center (Nyski Ośrodek Rekreacji) on Lake Nysa. Here, tourists in the season have the opportunity to rent a camping hut, private rooms, park a caravan or pitch a tent. Here you will find all opportunities to practice swimming, boating and all other water sports.

Nysa (The official site of the city in numerous languages, including Danish) 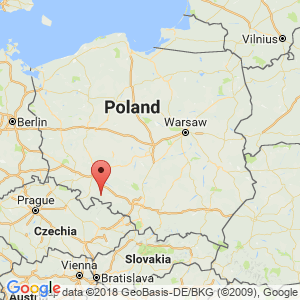