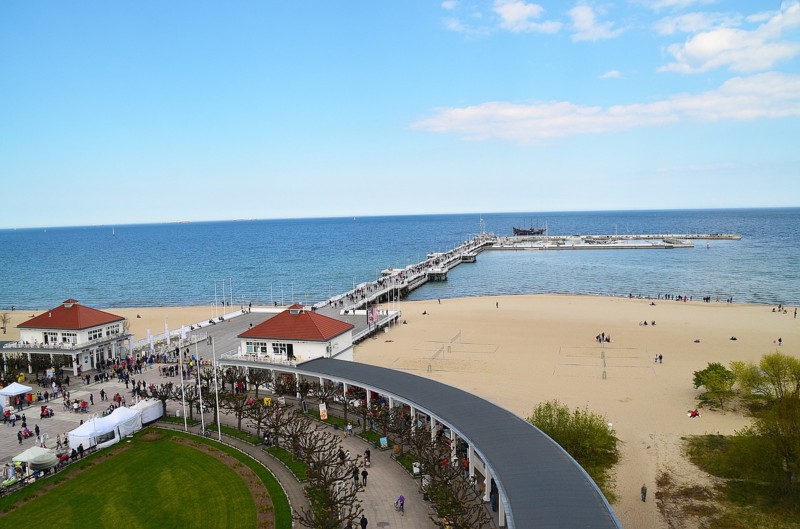 The beach and the long pier in Sopot. – Picture of Michał Koper from Pixabay

Sopot – known as a spa and bathing resort – is located in northern Poland, on the Baltic Sea coast, ie. at Gdansk Bay. Sopot is the middle of the cities of the so-called Trójmiasto (Trebyen), ie. the three closely related cities: Gdańsk, Sopot and Gdynia. Sopot is thus just north of Gdańsk and south of Gdynia. The green area west of the three cities and east of the north-southbound highway / highway is laid out as a landscape park: Trójmiejski Park Krajobrazowy.
Half of the city's area is covered with woods, parks, overgrown squares and other green areas. Numerous tourists and artists visit the city during the summer season. The number of summer guests exceeds 2 million.
The clean sandy beach stretches 4.5 kilometers along the entire Sopot urban area. Everywhere you find equipment and facilities for the use of visitors, ordinary bathers as well as guests who would like to practice water or beach sports. There are also shows and entertainment. The beach is constantly monitored by trained lifeguards.
The city's airport is called Port Lotniczy Gdańsk im. Lecha Wałęsy (named after the former president). The airport is located near the village of Rębiechowo at ul.Słowackiego 200, ie. west of Gdańsk (and west of the highway). Sopot is 10 km from the airport. There is a direct bus service to the main railway station in Gdansk, from where you can take bus or local train to Sopot.
The city name Sopot is an old Slavic place name. “Zoppot”, which the city was called in the German era, is a Germanization of the original Slavic name.
Sopot’s friendship town in Denmark is Næstved.

In the area of the present city there was a fortification in the early Middle Ages, the traces of which – the scene of violence – can still be seen at Haffner Street. The village of Sopot is first mentioned in a historical document in 1283. Sopot is mentioned here among a total of 16 villages which the Cistercian monastery in Oliwa received as property. Sopot was then owned by the monastery for almost 500 years until its properties were withdrawn after Poland's first division.
From the middle of the 16th century. Sopot began to develop from a village into a kind of holiday area for wealthy residents of Gdańsk, as a number of merchants from that city rented out plots of the monastery in Oliwa, on which they built 12 summer homes. This building was located in the center of the current city. At the same time, there was a small fishing village on the coast itself.
In connection with the peace talks that took place in Oliwa in 1660 as the end of the Polish-Swedish war, the Polish king Jan Kazimierz and his court lived on the Karlikowo property near Sopot. The head of the Swedish delegation stayed in Sopot itself. Karlikowo is now part of the city; here lies the horse racing track.
In 1733, Sopot was burned down by Russian forces besieging Gdańsk. After 1772, ie. after Poland's first division, Sopot was within the borders of the Prussian state. The properties of Oliwa Monastery, including Sopot, were confiscated and placed under the Prussian state.
The largest private landowner in Sopot, Carl Christoph Wagner, in 1819 made the first attempts to start a sea bathing facility, though without much success. Back then, there were 350 residents and 23 houses in the village. In 1823, the first, professional, bathing house was erected by Jean Georg Haffner. Therefore, the year 1823 is considered to be the beginning of Sopot as a health resort. The following year, the first spa in Sopot was opened. The spa house was expanded in 1842 and around the same time the first theater in the city arose. Between 800 and 1200 people visited the spa and bathing places during the summer season. During the last decades of the 19th century. Sopot evolved from a small settlement to a modern, elegant spa town. The number of caterers grew steadily and amounted to around 1900. 12,500.
In 1873 the settlement Karlikowo was laid under Sopot. In 1877, Sopot Municipality purchased Doctor Haffner’s waterpark and began to expand it. A new (second) spa house was built in 1881 near the pier. The pier itself was extended to 85 meters.
In 1898, the Karlikowo racetrack, which is still functioning, was opened. An evangelical church was built in 1901 and in 1902 a new Catholic church was erected.
The former rural municipality of Sopot was granted commercial rights in 1901.
A bath therapy monastery was inaugurated in 1904; the building was fitted with a high chimney. In 1956, the building and chimney were transferred to the county rheumatological hospital. When the chimney became redundant in 1975, the chimney was converted into a lighthouse. Between 1910 and 1912, the third health center was built in the city. It was an extensive complex with both hotel rooms, restaurant, wine bar, theater hall etc.
Just before the outbreak of World War I in 1914, there were 17,400 permanent inhabitants of Sopot, of whom approx. 20,000 summer guests. As a result of the Treaty of Versailles after World War I (1919), it was created “Polish Corridor”, which gave the new Poland access to the sea, while Gdańsk was declared a sanctuary (Danzig). This sanctuary also included Sopot just north of Gdańsk. Thus, the northern border of Sopot became at the same time the border between the sanctuary and the Polish Republic.
In 1927, the Casino Hotel, the largest and most modern of the city's hotels, was inaugurated. After World War II, the hotel was renamed Hotel Grand. In 1928, the pier was expanded to its current length of 512 meters. From 1938 German Nazism was noticeable throughout the sanctuary, including in Sopot, where the Jewish synagogue was burned down.
When the Second World War broke out in 1939, the Gdansk Free State was incorporated into the Third Reich. Polish residents of Sopot were arrested in large numbers. Many Jews fled. Sopot was liberated from the Red Army by the Germans in March 1945. As a result of the war actions, approx. 10% of the city destroyed, including a health center.
In 1946, a health and bathing facility was opened at the pier. In 1952 the electric railway between Sopot and Gdańsk was inaugurated. The following year a connection was further north to Gdynia.
The first Polish International Jazz Festival was held in Sopot in 1956. In 1961 the first International Song Festival was held in Opera Leśna. From 1963, the popular, central street in Sopot, “Monciak”, closed to traffic.
In the early 1970s’The building was erected with a large building complex with sanatoriums and hotels on the street ul.Bitwy pod Płowcami. In 1977, the municipal authorities were able to report the largest number of inhabitants in the city's history to date, namely about 54,500. In 1999, Sopot gained official health status.

“Monciak”
The center of the city is the street ul.Bohaterów Monte Cassino (the street of the Monte Cassino heroes), the central pedestrian street in the spa town, commonly called “Monciak”. The street is completely closed to traffic. On both sides of the street there are houses from the 19th-20th century transition, which houses pubs, cafes, restaurants and galleries. In the summer there are performances by musicians and the portrait painters are in full swing. To discover Sopot’s special charm, you can turn down a side street, after which you are in another world, full of cozy Art Nouveau houses, old parks and gardens. In such a small side street lies the beautiful, classicist estate, Dworek Sierakowskich, where the Company of Sopot’s Friends have their domicile.

Molen
As Monciak approaches the beach, turn left at Powstańców Warszawy at the end of the street. After a few meters you are at the spa square (Skwer Kuracyjny). In this place concerts are often arranged. From here, close to the beach, the pier goes out into Gdansk Bay. It is the longest, wooden-built pier in Europe. The length is approx. half a mile. The walking path is a total of 512 meters, of which 458 meters in the bay itself. The first pier on the site was built in 1827. The current pier dates from 1928. From the long pier you can admire the coastal stretch of the Treby, to the south thus the port of Gdańsk and to the north the Rezerwat Kępa Redłowska nature reserve (between the southern part of Gdynia and the bay). . The pier is also a port for tourist boats (with connection to Gdańsk, Gdynia and Hel) as well as water taxis. From the pier, however, has the best view as a spectator for competitions in sailboat sailing, windsurfing or other events on the water and on the beach. On the pier there is a larger and more smaller eateries. 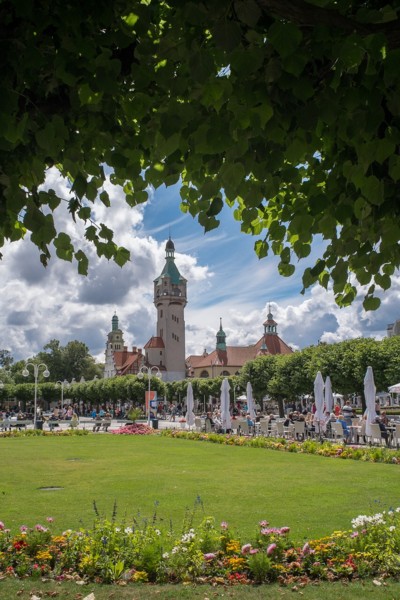 From a park in Sopot facing the lighthouse. – Picture of Michal Jarmoluk from Pixabay

The lighthouse (Latarnia motherland)
Near the pier stands the lighthouse with a viewpoint. This lighthouse has been operating since 1975 when it was housed in a former chimney of the Rheumatological Hospital. The height of the tower is 30 m.

mounds (Grodzisko)
During a stay in Sopot, one should also visit the site of the Violence (Grodzisko) from the early Middle Ages, which now functions as an open-air archaeological museum. The Voldstedet / Museum, which is the oldest attraction in Sopot, is located on Haffner Street, approx. 400 meters from the beach.

Opera Leśna
Opera Leśna is located in a green area by ul.Moniuszki, ie. in the western part of the city, where the urban area ceases and the forest begins. Opera Leśna is a covered open-air theater with seating for 4400 spectators. The orchestra grave can accommodate 110 musicians. Here, concerts with both classical and popular music are arranged. The theater was known for its performances by Wagner in the interwar period, and an opera festival is still being held. After 1961, Opera Leśna has become famous as the venue for the annual International Song Festival (Międzynarowy Festiwal Piosenki).

The fishing village (Przystań Rybacka)
On the southern part of the beach there is a small fishing village where you can buy fresh fish daily and see exhibitions with fishing boats and fishing equipment.

The horse racing track Hipodrome Sopot
The horse racing track in Sopot is located in the southernmost part of town (ul.Polna), near the city border between Sopot and Gdańsk. The course's history dates back to 1898. From the course, which covers about 40 hectares, there is a view of the bay. It is an ideal location for a company whose events attract crowds of spectators. The course is clearly one of the major tourist attractions in the city. After World War II, Hipodrom Sopot became the most important obstacle course in Poland. In 1997, the city of Sopot acquired the majority stake in the company that owns the course. At Hipodrom Sopot concerts are also held.

Stadion Leśny
Stadium Leśny (Forest Stadium) is like Opera Leśna (Forest Opera) located in the forest area (landscape park) west of the city center, just at the transition between urban area and nature area. Stadium Leśny is located at ul.Wybickiego. It is thus a very beautifully situated stadium for let athletics with a stand that can accommodate 5,000 spectators. There is also a course center, well-accessible wellness facilities and a restaurant in the stadium area.

Aquapark Sopot
Aquapark Sopot is a water park in the northern part of the city on the street Zamkowa Góra. Aquapark is a popular destination for tourists and tourists alike. In addition to several types of pools, there is also sauna, bowling and more 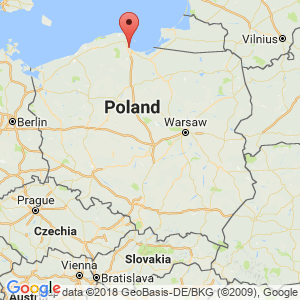