Kamień Pomorski is located on the Dziwna Strait (between the Szczecin Bay and the Pomeranian Bay), where it extends to the Kamień Bay. Dziwna separates the island of Wolin from the mainland east of the strait – where Kamień Pomorski is located. In the middle of the strait – west of the city – lies Chrząszczewska Island.
Where the town of Kamień Pomorski now resides, there was originally a settlement of the Slavonic tribe of Wolinianie. It is known that the settlement from the 9th century. was fortified and had a harbor. Early there was also a princely castle here.
The name of the town, Kamień, means “stone”, is associated with a huge walking block, called “King stone”, located in the strait off the northern shore of Chrząszczewska Island. It is a granite boulder that has been brought here from Scandinavia during the Ice Age; the block is approx. 20 m in circumference and rise about 3.5 m above the water level at normal water level.
Kamień Pomorski is one of the oldest cities in West Pomerania. In 967, Principal Mieszko incorporated the entire Wolinian area, ie. also Kamień in the kingdom of Poles – later Poland. The first two churches in the city – the Church of Mary and the Cathedral – probably date from the 1120s. In 1140, the pope created a diocese in Wolin. After the city of Wolin was destroyed by the Danes, the diocese was moved to Kamień in 1175. However, Pomerania and including Kamień continued to be exposed to Danish attacks. During fighting in the 1170s and 1180s, significant parts of the area and the city were destroyed; Hereafter, Prince Bogusław II was forced to allow West Pomerania to come under Danish supremacy – a situation that lasted about 38 years. The town of Kamień’Of course, these developments were hampered by these acts of war, but the city remained the episcopal seat.
In 1274, the city was granted commercial property rights by Prince Barnim I. The city became a trading center through which the northern German coastal cities traded with the West Pomeranian cities. From the 14th century the city belonged to the Hanseatic Association. In the first half of the 14th century. one began to erect a city wall; eight defense towers were also built, of which 3 were towards the fjord (the Fisherman's Tower, the Byt Tower and the Butter Tower); towards the land the city was bounded by a wall, 5 towers and 2 moat. The cathedral and the diocese's buildings were surrounded by its own defensive wall. In the 14th century. also built the town hall, which was the seat of the city council, for the artisan guilds and the district court. In time, several ecclesiastical buildings also emerged, including the domicile of the Dominican Order and St. Nicholas Church.
During the 30-year war (1618-1648) large parts of Pomerania were destroyed. Kamień Pomorski burned to a large extent, including the cathedral tower destroyed by fire. In 1630 the town was occupied by the Swedes. At the end of the Westphalian peace settlement, the Swedish-Brandenburg border stretched a little east of Kamień, but so that the city came under Sweden. This was changed in 1679, when the city fell to Brandenburg, ie. part of the later Germany. In the German era, the city was known by the name of Kammin or Cammin, that is, a clear Germanization of the Slavic name. 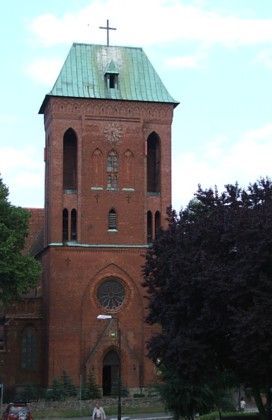 In the 19th century, a more peaceful and positive development for the city is initiated. Both ship and rail connections to Szczecin are established, as well as rail links to other cities in the vicinity.
In 1945, after World War II, Kamień returned to Poland, at that time as a city partially in ruins. The subsequent reconstruction of the city lasted more than 30 years. The most important factors that are important for the development of the city today are tourism – based on the area's natural values and historical memories -, the health resort, crafts, fisheries and agriculture.

The small, peaceful town opens up exceptionally beautiful to the water and not least on a sunny day, the old town, the beach and the pier (overlooking Chrząszczewska island and the country north of the city) are a nice and relaxing place to be.

Both the cathedral and most of the city's other old buildings are listed below.

The Cathedral (Church of John the Baptist / Cathedral Św.Jana Chrzciciela)
The cathedral is a Late Romanesque / early Gothic building whose oldest parts date from the 12th century (possibly the 1120s). The Diocese of Kamień was established in 1175. Today, the cathedral belongs to the Archdiocese of Szczecin-Kamień as “konkatedral” (the former or second most important cathedral in a diocese) as well as the parish church. The building and the institution testify to the old and the town's old affiliation with Poland. Under the floor of the church are several West Pomeranian princes and the bishops of Kamień buried.
The town of Kamień is today known as the host of the organ concerts held at St. John the Baptist, which owns an ancient and very valuable 18th-century organ. 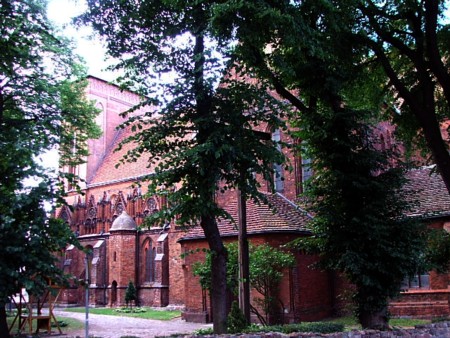 Bispegården
The diocese is at the Cathedral Square; it is also called the Bishop's Palace. The current building is in the 15th century. in the Renaissance style, but rebuilt in the 16th century. From here the Episcopal administration took place in the 14th-17th century. 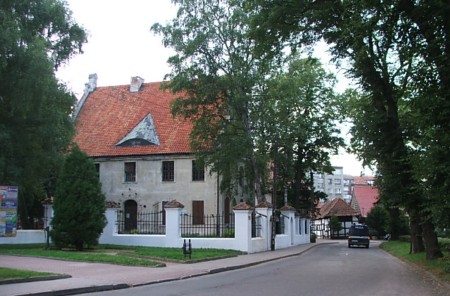 The diocese at Cathedral Square

City Hall
The rebuilt Gothic town hall from the 14th century. is located in the middle of the square; it has an archway to the east and a rich facade decoration.
(See photo at the top of the page).

Bymuren
Large parts of the medieval city wall as well as the Wolin Gate have been preserved. 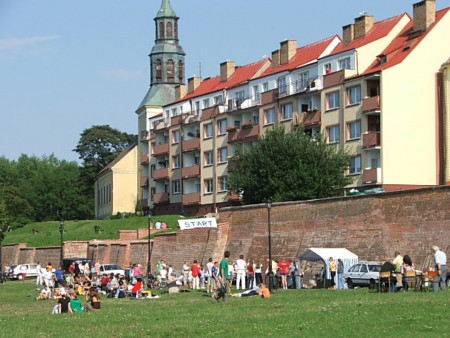 Kamień Pomorski. The city wall facing the fjord, east of the pier. In the background the Church of Mary. 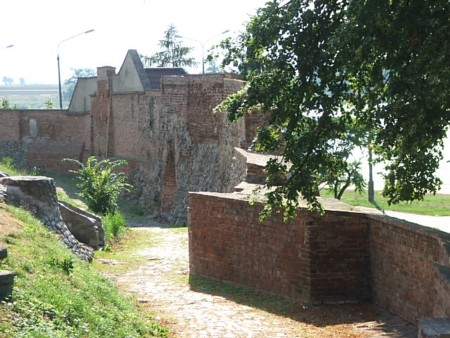 Kamień Pomorski. The city wall facing the fjord, west of the pier. 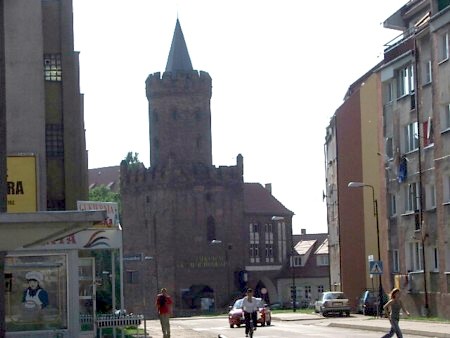 Maria Church
The Church of Mary was erected in the northeastern part of the old city. The original church dates from ca. 1124, but was basically rebuilt in the 1600s. The present appearance was given to the church in 1753. The tower is now crowned with a helmet typical of the Baroque era.

Saint Nicholas Church
dates from the 14th century when the church was built of bricks and to a lesser extent of walking blocks. In the 16th century. added the characteristic pentagonal tower.

Half-timbered building from the 18th century.
by the square – now hotel. 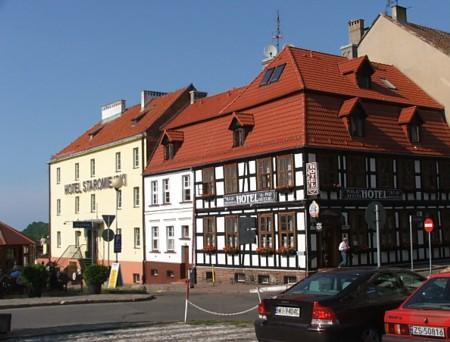 The beautiful half-timbered building by the square

The harbor and the pier
In Kamień Pomorski there is a fishing port and a pier for the passenger boats that enter the city. 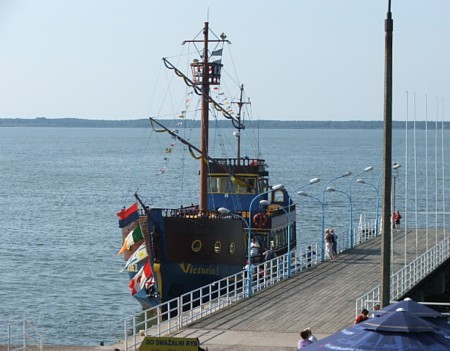 The Kamień Pomorski pier with the passenger boat “Victoria”. The boat sails up to Dziwnów on the Baltic Sea and returns

The health resort
The city also has a spa with preventative, curative and rehabilitative treatments; Among other things, saltwater baths are offered.

Memorial to Ewald Georg von Kleist
In December 1745, Ewald Georg von Kleist (1700-1748), dean of the Judicial Chapter of Kamień, conducted the first in the world an experiment with an electric capacitor using a bottle with a nail and alcohol to collect electricity, the so-called Kleist bottle (also called the Leydner bottle after another experiment in Leyden in January 1946). A memorial plaque for Kleist was unveiled in the 300th anniversary of his birth. 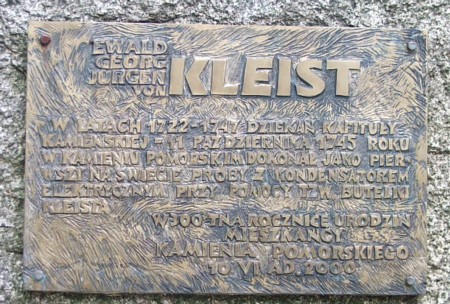 The area is attractive to all nature lovers due to the bird life and fishing opportunities.

Booking.com
Kamień Pomorski (The official site of the city – in Polish, German and English) With practical information for tourists

Kamień Pomorski (The official site of the city – in Polish, German and English). With practical information for tourists

Kamień Pomorski (The official site of the city – in Polish, German and English) 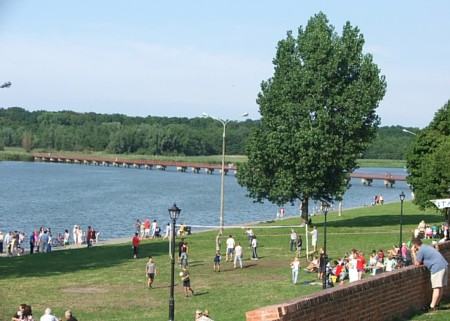 View from the old town to the north. To the right the footpath (the footbridge) over the small fjord (Karpinka) to the beach to the south of the village of Żółcino 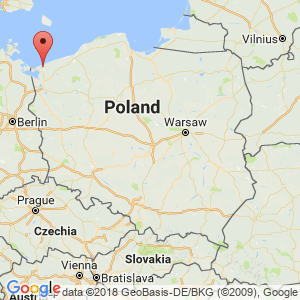