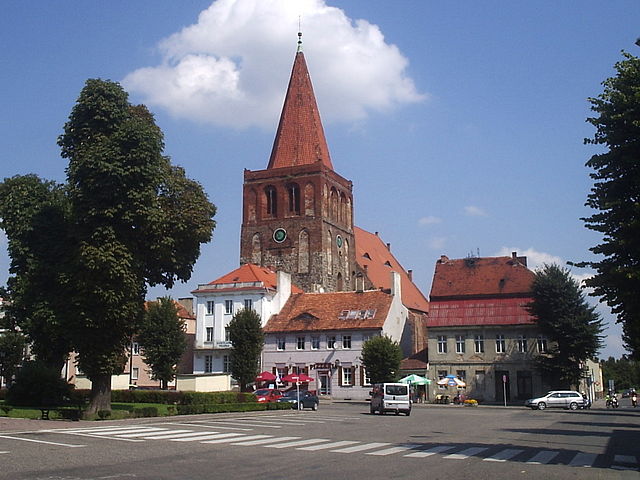 The square in Myślibórz with the parish church. – Photo by: Jan Jerszyński, Myslibórz rynek, CC BY-SA 2.5

Myślibórz is located in western Poland, southeast of Szczecin.
The city became the market town in 1270.

Bymuren
The city is surrounded by the remains of a defense wall in stone as well as brick, built in the 14th century. In the course of the wall, 2 square, brick-built gate towers are preserved:

Brama Pyrzycka, and in addition the tower:

Baszta Prochowa (Powder Gate)
which is cylindrical in shape and built of field stones and bricks, respectively, and fitted with a chest protector at the top.

City Hall
The late Baroque of 1771 is on two floors with a facade adorned by a triangular tympanone.

Helligåndskapellet
At ul. Bohaterów Warsaw stands the former Kaplica Św. Ducha from the 14th century. It was later a grain store and is now equipped to accommodate the Museum of Myślibórz Lake Landscape.

Lakes
The town is surrounded by lakes. By far the largest is Myślibórz Lake northwest of the urban area.
Here are opportunities for water sports, such as kayaking and boating.

Booking.com
Myślibórz – in Polish, English and German, with practical information for tourists

Myślibórz – in Polish, English and German, with practical information for tourists

Myślibórz – in Polish, English and German 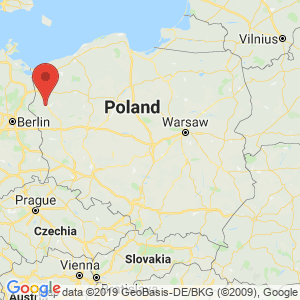