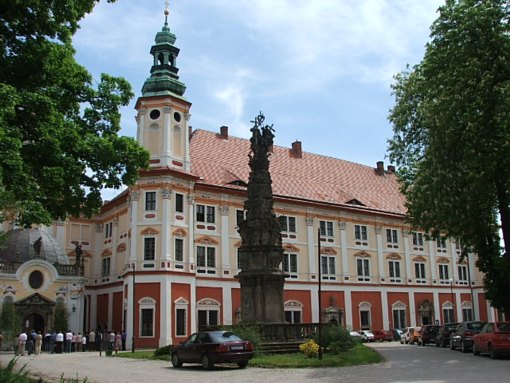 Henryków is a village on the Oława River northwest of Ziębice, in the southeastern Lower Silesia, known primarily for its large monastic complex. The village is located in the municipality of Ziębice.

In the year 1222 a Cistercian foundation was founded here by the canon Mikołaj, notary and secretary of the Wrocław prince Henryk I Brodaty. The Kanniken possessed large land estates around present-day Henryków. Mikołaj invited Prince Henryk, his wife and three bishops (including the bishop of Wrocław) to a gathering on his property. During dinner he presented his plan to create a Cistercian monastery. The prince gave his permission, but when he, as the canon’s employer, believed that his wealth was largely due to himself, that is, the prince, he contended that his son, Henryk II Pobożny, was enrolled in the founding document as the formal founder of the monastery. And that’s how it happened.
The Cistercian monastery was founded as a branch of the monastery in Lubiąż, and in 1227 the first 9 order brothers arrived from Lubiąż under the leadership of Abbot Henryk, and they began to build the first monastery.
The monastery complex remained in the hands of the Order until 1810. The current building complex, which is an international cultural monument, consists of the following parts:

The abbey church:
The Church of the Virgin Mary, also consecrated to John the Baptist, dates from the 13th year. and expanded in the 14th, 17th and 18th centuries; the interior of the church is preferably in Baroque style (including the famous “Henryków-choir stalls”); in front of the church is the Pillar of the Holy Trinity from the 17th century
The church was inaugurated for the first time in 1228, but was destroyed during the Tatars invasion in 1241. Shortly after the reconstruction began.
Today, the church appears as an early Gothic, walled building; however, parts of the construction are of sandstone. It is a three-tiered basilica with a crosswalk. The early Gothic spelling in the windows is preserved only in some windows of the choir and transverse ship. To the northeast are two chapels, respectively. from 1508 and 1560. The west façade, created by Mateusz Kirchberger in 1687-98, is marked by a porch, covered with a dome, as well as a tower, built in 1608 as an extension of the northern side ship.
The church’s main ship is bounded on the sides by two rows of massive pillars. In the middle of the ship are the church benches, dating from the mid-18th century. The rich furnishings include the castings of iron on the front door to the west, princely tombs, the main altar in Baroque style from approx. 1684, the side altars in the two arms of the transverse ship – in respectively. late baroque and rococo style. In the main ship there are 8 pictures of G.Bonora that together create a cycle “The legend of St. Bernhard”. The central element of the main altar is a picture of Michał Willmann: “The birth of God in a vision of St. Bernhard”.
The transverse wing of the transverse contains the monk choir and, moreover, formed a connection between the church and the monastery.
In the second half of the 18th year. a chapel was added to the choir: the Chapel of Mary Magdalene, which now houses the mausoleum of the Ziębice princes of the Piast genus.
The organ of 1760’The eras are on the balcony above the main entrance of the church.
A special position occupies the monks’ wooden armchairs with an unusually rich sculptural decoration that depicts scenes of the life of Christ. The chairs form two rows of seating along the two walls facing the aisle. The chairs, which are made of oak, date from 1576, while the decorative elements originated in the years 1685-98. After similar crusades in the church in Lubiąż have been destroyed, these are now unique examples of church art in Poland. 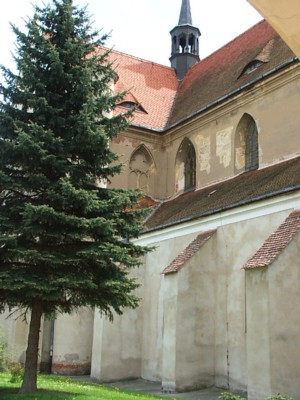 The monastery church seen from the north 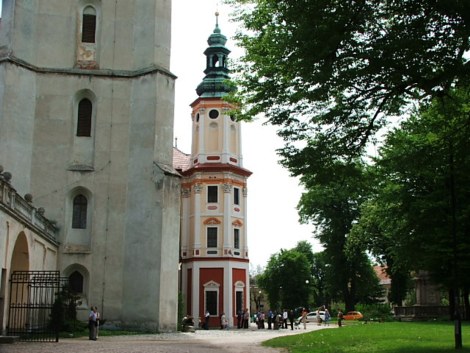 The monastery
in the Baroque style from the 17th century. (now branch of Wyższe Seminary Duchowne (ie Higher Priesthood Seminary) in Wrocław). The monastery includes: an Italian terrace garden from the 19th century. and the 18th-century monastery, in the center of which is the abbot’s summer pavilion (built 1720-27), whose roof is adorned with an onion-shaped dome; the garden also holds an orangery from the 18th century. To the east extends a landscape park of approx. 106 ha with several natural monuments.
The present monastery building was erected in the years 1681-1702 in connection with a redevelopment of the entire complex, led by Mateusz Kirchberger. The monastery is located on the south side of the church, set around a rectangular, inner monastery. The front facing the courtyard is flanked by two hexagonal corner towers. It should be noted that the refectory (dining room) on the ground floor and “prince hall” on the 1st floor, both with beautiful decorations. The eastern part of the monastery was for a time the abbot’s residence. The front yard, west of the main building and the church, is surrounded by the other wing of the complex – facing four corners of the world. These are relatively low two-storey buildings, erected at the end of the 17th and early 18th centuries. These buildings contained a Latin school (to the south), housing for staff (to the west) and carriage rides (to the north). Through a passage in the northern wing you enter the second, outer yard (the breeding farm), which thus forms the northernmost part of the plant. Here, among other things, the so-called gazebo, built in the Gothic style at the end of the 15th century. West of the breeding farm, which also housed the stables, remains of the medieval defense wall.
East of the church is a former hospital building.
Following the Tatars’ attacks in the 13th century and the subsequent destruction, it was necessary for the monks to document which land was theirs. This led to a description of the buildings belonging to the monastery, and thus to a more elaborate local historical description. Thus came the later famous Księga Henrykowska (Henryków book), a monastery chronicle – in Latin of course – where one later found a phrase in Polish, considered to be the first example of Polish prose. In addition to the above sentence, there are also several Polish personal names and place names in Księga Henrykowska, which bears testimony to the Polishness of Silesia in the 13th century. The monastery chronicle was written by abbot Piotr in the years 1268-73; after his death it was continued until 1310, and it has given posterity many useful information on the social life of Silesia. The valuable work was found by researchers in the mid-19th century. A translation into Polish was published in 1949.
For the first time after its founding, the monastery developed lively with the support of the Silesian princes of the Piast genus. A walled monastery emerged ca. 1270 and a school was founded. About 1300 lived here 45 monks and 50 lay brothers.
Developments stopped as a result of the devastation of war. A new flourishing followed in the 17th and 17th centuries, under the dominance of the Habsburgs and ruled by abbeys such as Melchior Welzel, Henryk Kahlert and Tobiasz Ackerman. From this time much of the valuable furniture in the church and the monastery is derived.
The abbot’s residence was also for a period the bourgeoisie Witostowice – ziebice, a village northeast of Henryków.
By the secularization of 1810, the monastery was demolished and its property taken in favor of the Prussian state. In 1812, the sister of the Prussian King acquired the property in Henryków; it thus became a princely residence and served as such until World War II.
In 1947, the Cistercians again took over the church and part of the monastery. After the war, some of the buildings were used as a center for plant cultivation and seed breeding. It is now a priesthood seminary. – Currently, the monastery buildings are not accessible to the public. 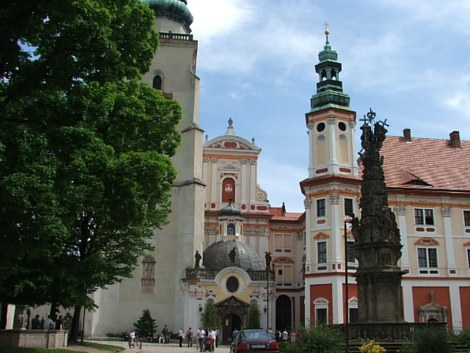 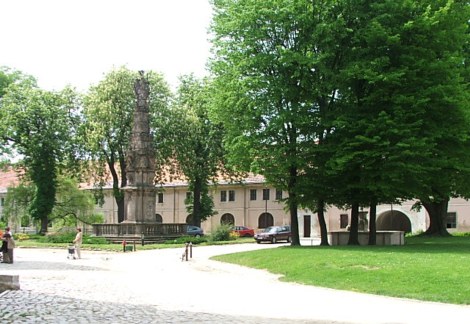 Entrance gates and remains of the defense wall
The remains of the defense wall are from the 16th century. Also preserved are the following Baroque-style gates: Lower Port from 1680 and Upper Port from 1701. Lower Port (Brama Dolna) led from the west (from the village) to the breeding farm, while the Upper Port (Brama Górna) led (and leads) to the courtyard of the monastery with the main building and church. – Brama Górna is a two-storey gatehouse, covered with an onion-shaped dome. The bridge from the gate across the river to the monastery is paved and bounded on both sides by a wall of numerous niches. 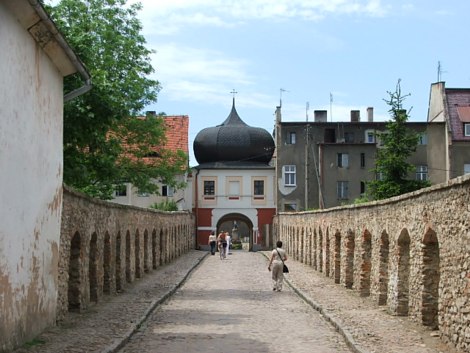 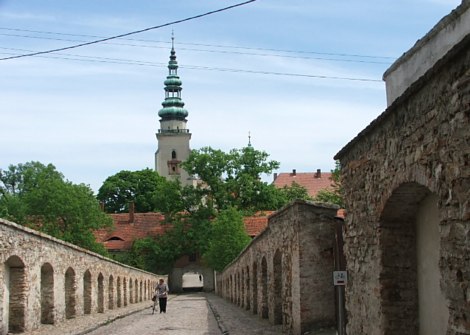 St. Andrew’s Church (Kościół św. Andrzeja)
is located in the northwest corner of the monastery and was originally intended as a parish church for the local population. It is listed in 1316, expanded in 1616 and demolished in the years 1894-95; preserved is the multi-sided choir covered with cross vault. Near the church stands a statue of Saint Jan Nepomucen from 1730.

Plan of the Henryków Abbey complex: 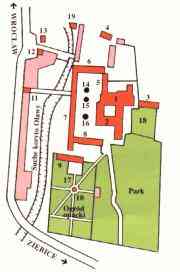 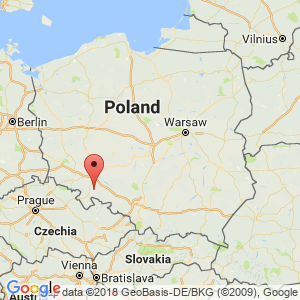