Canals and other waterways in northeastern Poland

Passenger sailing on the canals and lakes of Mazury and Podlasie 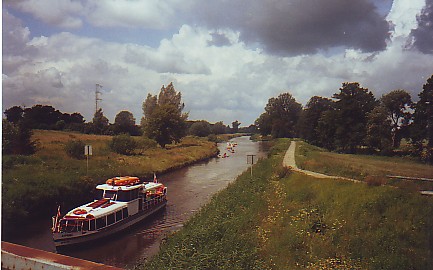 The canal consists of three main sections with a total length of 129.8 km as well as several side branches. .

Today, passenger boats depart from Elbląg and from Ostróda in the period from May to the end of September. The boats travel the course in 11 hours.

This canal was built to create a waterway between them for business purposes “Oberland”, as this part of East Prussia was called in German, and the Baltic. This enabled the logging of timber and grain freight from the lush areas of western Masuria to Elbląg and on to the ports of the Wisła Fjord. 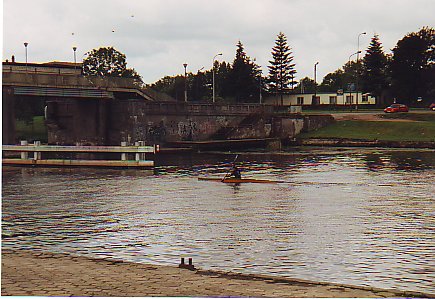 Engineer and Royal Building Advisor Georg Jakob Steenke designed the canal, and it was built in the years 1848-1872. The biggest technical problem was the overcoming of the 99 meter level difference between the water levels in the Druzno and Piniewo lakes over a distance of 11 km. Steenke devised an original concept that still works today in unchanged form. The solution consisted of two locks (Miłomłyn and Zielona) and five tugs (Buczyniec, Kąty, Oleśnica, Jelenie, Całuny). The boats force the tugs placed on special carriages on rails.
In 1852 the route from Iława to Elbląg was opened.

The Miłomłyn-Ostróda section was not officially opened until 1860, although the first ship sailed through the canal to Ostróda in 1856. The last section of the canal system, namely from Ostróda to Stare Jabłonki through Lake Pauzeńskie, was completed in 1873.

The construction of a railway line in the area, which took place almost simultaneously with the construction of the canal, to some extent weakened the economic importance of the canal. However, until 1912 the canal was used exclusively for the transport of agricultural crops, timber and industrial products. After that, the regular tourist sailing started on the Ostróda-Elbląg section.
The acts of war in 1945 brought serious material destruction to the canal.
In 1948, the canal was reopened and tourist sailing resumed.

Ostróda, located on Lake Drwęckie, is the southern starting point for canal tours. Here is a shipwreck and departure point for the Ostróda-Elbląg Routing.
From Ostróda to Stare Jabłonki and from Miłomłyn to Iława the boats force the level difference using locks. GJSteenke also tried another way to overcome the level difference, building a dam across Lake Karnickie and excavating the channel in it; This allowed the water level in the canal to be 2 meters above the water level in the lake, which allowed sailing on the Miłomłyn-Iława section.

Passenger Sailing i “Land of the Great Masurian Lakes”

Passenger sailing on the largest Polish lakes and on the lakes connecting them takes place from spring to autumn. The largest lake is Śniardwy with an area of 113.8 km2; the second largest Masurian lake is Mamry, whose area is 104.4 km2.
The lakes are surrounded by varied coastlines, rich flora and beautiful forests.
With the passenger boats you can make excursions of several hours duration partly according to the sailing plan and partly according to any. special requests and orders. There are departures from Węgorzewo, Giżycko, Mikołajki and Ruciane-Nida.

The voyage of passengers dates back to 1854, when the Prussian King Friedrich Wilhelm IV made the first voyage on the route “The Great Masurian Lakes” aboard the steamer “Masovia”.

The Augustów canal forms part of the waterway connecting Wisła and Niemen via Narew, Biebrza, the Augustów lakes and Czarna Hańcza. Originally, the canal was primarily used for rafting of timber, etc. Today it serves as a connecting link between the Augustów lakes, where passenger traffic takes place; At the same time, the canal is a popular kayaking route. All departures by passenger boats take place from the port of Augustów, where the eastern section of the canal begins.

This canal is the only functioning canal of its kind in Europe and, moreover, the section between Augustów and Kudrynki (where the river Czarna Hańcza has its entrance into the canal) is recognized as a technical memorial and subject to conservation regulations. The length of the canal is 102 km and there are 18 locks. Of these, in the Polish area – over a distance of 78 km – 14 locks; in Belarus there are 3 locks; To this is added 1 sluice, which is divided in the middle of the state border. Six of the locks are out of order. They raise the water level 15 meters between Biebrza and Augustów and 41 meters between Augustów and Niemen.
From the place where the Augustów canal joins the Biebrza River, you can kayak on Biebrza to the Narew River (84 km) and on Narew via Lake Zegrzyńskie to Wisła and Wisła to Warsaw (240 km).

The project of building a canal that gave access to the Baltic Sea by bypassing the Prussian state eastward, originated in Poland after Wisla’s lower race with its outlet in the Baltic had become Prussian territory. Construction, which was designed by Ignacy Prądzyński, began in 1825 and was completed in 1839.
The canal consists of 44 km of artificial excavations, 35 km of regulated rivers and 21 km of lakes. The amount of water consumed comes from Lake Serwy, which is at the highest point of the route. Despite continued utilization, the basic functions, the course of the route and the distribution of lock stations have not undergone any major change since the time of construction. The system thus operates on the basis of engineering work from the first half of the 19th century. Of the 14 locks in Polish territory, 9 have retained all the original construction from the 19th century.

Links to other pages:
Kanał Augustowski

The Mazury Canal (Kanał Mazurski) is a very interesting hydrotechnical plant located in the northern border of Poland, between Lake Mamry and the Russian border.
The canal is not navigable but is worth seeing because of the original technical solutions used in the construction and because of the beautiful nature in which it is incorporated. The Mazury canal is recognized as a hydrotechnical memorial. It can, e.g. Please check with us for a bike or car excursion in the area.
The total length of the channel is 51 km from Mamerki on Lake Mamry to the River Łyna in the Russian Kaliningrad area; 22 km in present-day Poland. The height difference between Lake Mamry (116.3 meters above sea level) and the river Łyna is 111.2 meters.
The first draft of the canal construction dates from the years 1862-1864. These drafts were amended several times. The original purpose of the construction was to carry the water from the large Masurian lakes in a northerly direction to the river Pregoła, thereby creating a waterway to the Baltic Sea, and to utilize the water energy to power hydroelectric power stations, and finally to drain about 17,000 hectares of meadow. In a later phase, the energy functions were abandoned and plans were made to utilize the canal exclusively as a waterway for transporting timber, building materials and peat as well as in tourism.
Construction began in 1911, but the outbreak of war in 1914 interrupted work, which was only resumed in 1934. During the Third Reich, this canal was a secret facility. On topographical maps from 1939, neither locks nor other technical installations are marked. Construction was discontinued in 1942 and not resumed later. At the interruption of the work, the entire canal was filled with water. After the Red Army invaded East Prussia, the plant was looted and installations abducted. The destruction was completed by local settlers.
There are locks in the villages of Leśniewo Górne, Leśniewo Dolne and Guja as well as further to the north of the rural villages of Bajory Małe and Bajory Wielkie. In the section up to Lake Rydzówka, the channel width is 20-25 m and the depth 1.4-1.6 m; The section runs from the lake Rydzówka to a width of 20 m and a depth of 1.2 m.
In addition to 5 locks, the canal route also includes 3 railway bridges, 8 road bridges and 3 dams of land.
At the locks in Guja and Leśniewo there are also buildings for use by the gatekeepers.
Along the non-functioning sections of the canal, which is filled with stagnant water, is seen a rich plant growth and colonies of beavers.

An excursion in the area starts at Mamerki, near the spot where the canal runs out of Mamry Lake.
During World War II, Mamerki was a headquarters for the German army, directly under Hitler’s headquarters, Wolfsschanze, at Gierłoż, 17 km to the southwest. Mamerki is the best-preserved complex of German military bunkers in Poland (30 in total).
The first and best known lock on the canal route is the lock in Leśniewo. One can stroll there from Mamerki; it is a trip of approx. 40 minutes through the forests. From Leśniewo you can take the road via Dąbrówka to the canal's only active lock at Guja. The next lock is in Bajory Małe. The building looks big and massive; unfortunately, it was destroyed by the Germans as they withdrew during the war. You can reach the last lock before the state border by a road from the Bajory Wielkie locality.

Links to other pages:
Kanał Mazurski 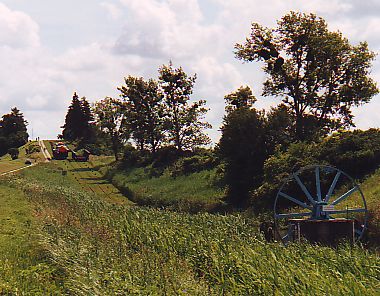