Pruszcz Gdański is located in Pomerania, immediately south of Gdańsk, with which it is actually built.

About 700 years before our time, the area of the present city was already inhabited. In the Roman Empire there was considerable trade between this area and the Rome. One of the most important export goods from this part of present-day Poland was amber. Previously, this settlement had access to the sea via the then mouth of the Wisła River. The later city of Gdańsk took over the port city function.
As the Crusader Order of the Middle Ages had its heyday, the Order invested some part in the Pruszcz settlement to make it the center for the supply of necessary goods to the fortified city of Gdańsk. In this way, Pruszcz played a subordinate role to Gdańsk for several centuries. In the 19th century, there was – under Prussian rule – a liberation from the ties to Gdańsk. Modernization and infrastructure improvements were initiated; in 1879-81 a sugar mill was established in Pruszcz – it was the largest industrial enterprise in this area. After World War I, the city was part of the area called the Gdańsk Sanctuary – established in 1920. However, in 1939, after the German occupation of Poland, the sanctuary was incorporated into the German Empire. On March 24, 1945, the city was captured by the Soviet army. Subsequently, the former sanctuary was incorporated in Poland.

The Holy Cross’ Church of Exaltation
was built about 1336 in Gothic style. 1585-1945 it was a church for the Protestant congregation, after 1945 again a Catholic church.

Radunia channel
The channel starts from the river Radunia on the western edge of Pruszcz and runs over a distance of 13.5 km – almost directly to the north. It has its outlet in the Motława River in Gdańsk. The canal was originally built in 1330’of the Crusaders, but has since expanded. Its purpose was from the beginning partly to supply the city of Gdańsk and the castle here with fresh drinking water, partly to operate the Great Mill in Gdańsk and partly to supply the moat with water. In the 19th century, the canal was expanded to control the volume of water and to prevent flooding. In July 2001, however, after a heavy cloudburst, a flood nevertheless occurred as the violence was broken and parts of Gdansk were submerged.

sugar factory served from 1881-2004. The vast area of the huge buildings is now with all departments and functions accessible to interested parties.

Booking.com
Pruszcz Gdański – in Polish and English, with practical information for tourists

Pruszcz Gdański – in Polish and English, with practical information for tourists

Pruszcz Gdański – in Polish and English 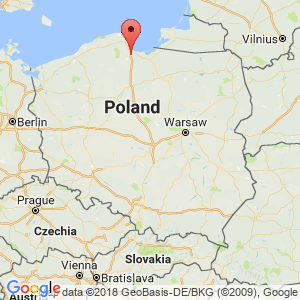