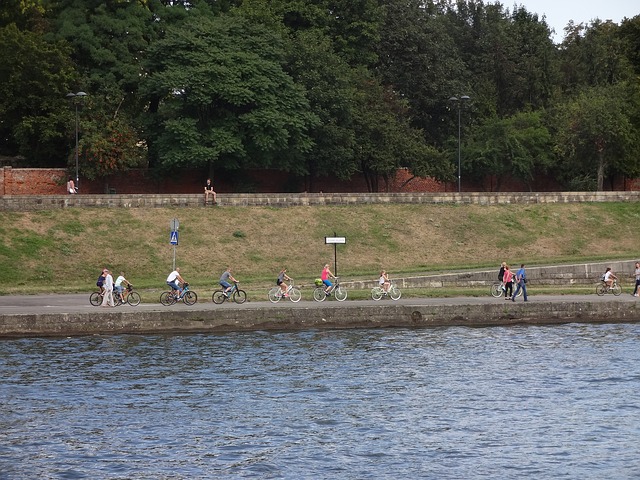 Cyclists in Kraków. – Photo by: Picture of Yasemin Avun from Pixabay

Mountain biking for everyone in the scenic Bieszczady region.
Contact (in English):
Krzysztof Plamowski
E-mail: plamowski@onet.pl \

Suggestions for cycling on marked trails in and near the Pieniny Mountains in southern Poland, quite near the border with Slovakia. The routes, some of which follow the Dunajec River through the mountains, run on both the Polish and the Slovak side of the border.
The Pieniny Mountains and the Spisz region
Bike paths in Pieniny, see Pieniny National Park

The tours lead the tourist through the large lake area, Mazury or Masuria in northeastern Poland, with around 5000 larger or smaller lakes, a region where large areas are covered by ancient natural forest and which have a unique plant and animal life.

The Białowieża forest is the only true primeval forest in Europe. The large forest area includes the oldest Polish national park, which is otherwise included at UNESCO’s list of the world’s natural heritage. Białowieża is not least known for its large stock of European bison.

Tours on your own

Text in Danish:
The Pieniny Mountains and the Spisz region

Keep in mind that bicycle paths are a rarity and that cyclists certainly do not have the same priority in traffic as e.g. in Denmark. Motorists are not used to having to look after the cyclists. However, cycling tourism and cycling are generally progressing in Poland. However, it is still advised that as a cyclist you avoid the more busy roads. Also watch out when passing major cities. On the other hand, there are many small roads where you get in close contact with nature, and many nice villages and small towns where traffic is minimal.