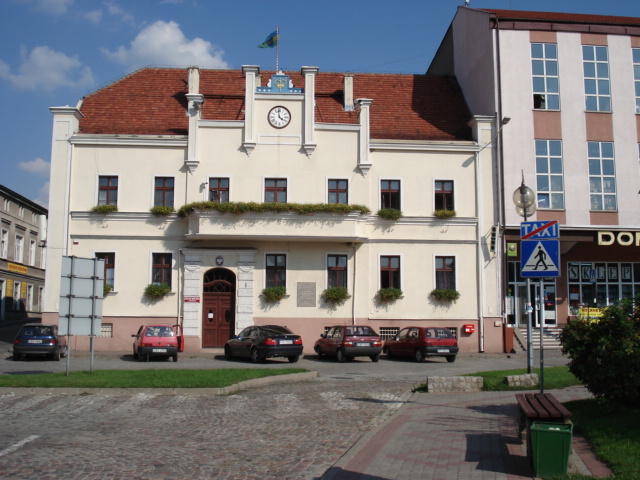 The town hall in the square in Koronowo

Koronowo is located in the Kuyavian-Pomeranian region of northern Poland, on the Brda River, 23 km north of Bydgoszcz. To the south and north of the city are several lakes, to the north first and foremost Jezioro Koronowskie, which flows through the Brda River.

Already at the transition between the 7th and 8th year. the Slavic tribes had founded a fortified settlement here – on the altitude of Wzgórze Łokietka. In 1288, an agreement was signed between Bishop Wisław in Włocławek and the Cistercian monastery in Byszewo on the monastery's takeover of the village of Smeysche, the present Koronowo. The construction of a monastery in Koronowo began in 1289. The town's later name also derives from the Latin name of the monastery: Corona Mariae. The building, which included the monastery as well as the church building, is believed to have been completed during the first half of the 14th century, obviously before 1350. Commercial rights gained the town in 1368. In 1411, Koronowo was captured and destroyed by the Crusaders. In the period 1686-1706 the Cistercian monastery and the monastery church were rebuilt and renovated. From 1772, Koronowo came under Prussian rule. When the Cistercian order was abolished in 1819, the monastery buildings were built for prison. A narrow-gauge rail link between Koronowo and Bydgoszcz was opened in 1895. Later, in 1909, the normal-rail line to Tuchola was opened. In connection with the surrender of the area to Poland – according to decisions in the Treaty of Versailles 1919 – Polish forces under General Haller Koronowo took up the 26th of January 1920. The German occupation in 1939-1945 led to expulsions, abductions to concentration camps and numerous killings on citizens of Koronowo and its environs.

Former Cistercian monastery buildings with the parish church
The buildings that formed the former Cistercian monastery originally date from the late 13th and early 14th centuries. They have been rebuilt several times after the wars with the Crusaders and with Sweden. After the decommissioning of the Order in 1819, the buildings were converted into an ever-existing prison.
The parish complex also includes the parish church: the Church of the Virgin Mary. It is an impressive Gothic basilica, partially remodeled in Baroque style with several side chapels. The choir and side ships are covered by Gothic vaults, while the rest of the church has Baroque vaults. The church is richly equipped, from the inventory can be seen pictures of Bartłomiej Strobel, fragments of Gothic polychromy, the beautiful Baroque-style choirstones, decorated with bas-reliefs and the Baroque baptismal font of the 17th century.
The Baroque palace and monastery buildings are not accessible to the public because of their current function as a prison. 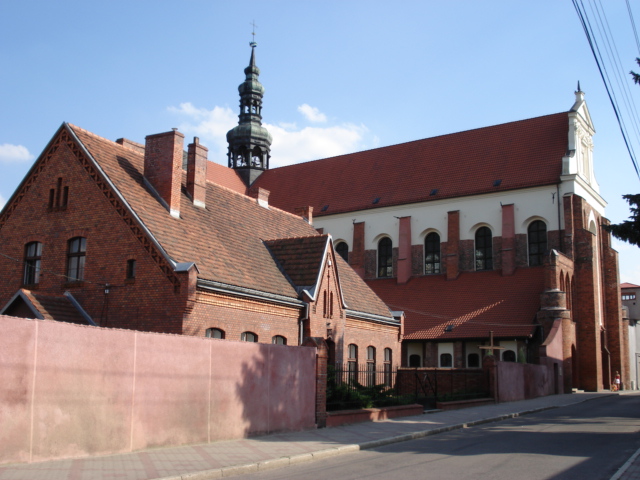 St. Andrew's Church (Kościół pw św.Andrzeja)
is now branch church, but was erected as a parish church in an early period of the town's history, namely in the years 1382-96. The original building style was Gothic. Since then the church has been rebuilt during the Renaissance and Baroque periods. The church's equipment is preferably in Baroque and Rococo style. The main altar is in late Baroque style from approx. 1740. The pulpit in rococo style dates from the second half of the 18th century.

synagogue
The former Jewish synagogue was built in 1856. The building is now owned by a gymnastics association.

Diabelski Młyn (Devil's Mill),
a watermill whose construction is a wooden skeleton filled with bricks was built in the 19th century. by the Brda River.

The city of Koronowo is destinations for the residents of the big city, Bydgoszcz to the south as they take on weekend trips and summer vacation trips. Koronowo has several holiday centers as well as nearby beaches. Many hiking and cycling routes for tourists run through or near Koronowo.

Koronowo Lake
Koronowo is located in the northern part of the historic Kujawy region, in the southern Pomeranian lake landscape. To the north and east, the town is surrounded by dense woodland. The Brda River Valley, where the town is located, is characterized by a large number of elongated lakes; In addition, in 1956-60, a large tiered lake / water reservoir was named Jezioro Koronowskie (or Zalew Koronowski), just north of town; This lake has an area of 1,560 hectares and a maximum depth of 20 m. by Pieczyska , at the southern part of the lake (about 3 km northeast of Koronowo’s center); there is also a marina and the opportunity to practice various water sports.

Kayaking on the Brda River
Brda has long been recognized as a very beautiful kayaking route. Brda has its source in the hilly lake landscape near the town of Miastko in central Pomerania. The river, running from north to south and at Bydgoszcz, flows into Wisła, is on a stretch of approx. 200 km available for kayaking. As the river traverses numerous lakes and is fed by numerous tributaries, it is safe to sail on it, even during the worst summer drought. Along the river banks, there are signs that inform the sailors about where they are and the distance to accommodations. Tributaries and alternative kayaking routes are also marked along the way. The river banks are easily accessible and tourist friendly; you can stay almost anywhere. Brda is an ideal route for kayaking in small groups.

The village Byszewo (about 9 km west of Koronowo)
The first Cistercian monks came to Byszewo between 1253 and 1256. They built a monastery here, which after 30 years was destroyed by the Crusaders. Soon after, the Order moved to Koronowo and erected a new monastery there (see above). A church parish was established in Byszewo, and the first parish church was built in the 15th-16th century. Not long after, a new church was erected at the same site, a church that was rebuilt and expanded in the 17th century, ie. with the look that the building still has today.

Nowy Jasiniec (about 8 km northeast of Koronowo)
This village can showcase the ruins of a Crusader castle, built in the years 1377-92. Preserved to this day is the outer wall with an extension and part of the basement. The castle was situated on the border between the Polish state and the crusader state and thus constituted a strategic point which was often fought. After the partition of Poland, many Germans moved to the area and to meet their religious needs, an evangelical church was set up in the castle. In 1846, however, the Germans built a new church in Serock (4 km east of Nowy Jasiniec); Most of the churchgoers also moved to Serock, which meant that the church, that is, the castle, in Nowy Jasiniec was abandoned and, over time, went into disrepair and ended up like the ruins seen today. West of the ruins is an early medieval rampart. (Also see: Crusader castles and bishopric castles in northern Poland ). 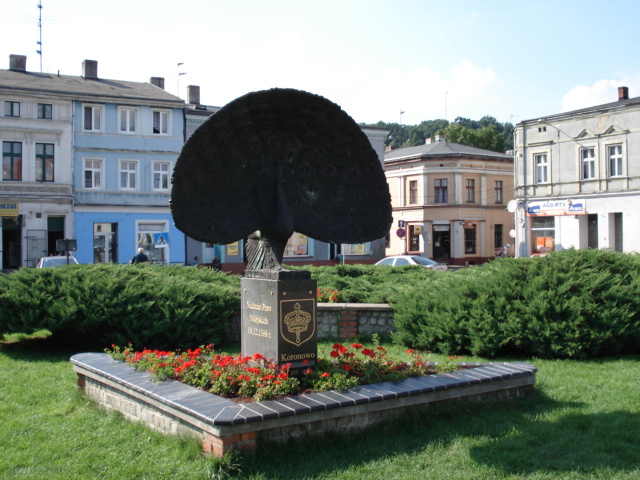 Booking.com
Koronowo (The official site of the city in Polish, English, German and Italian) 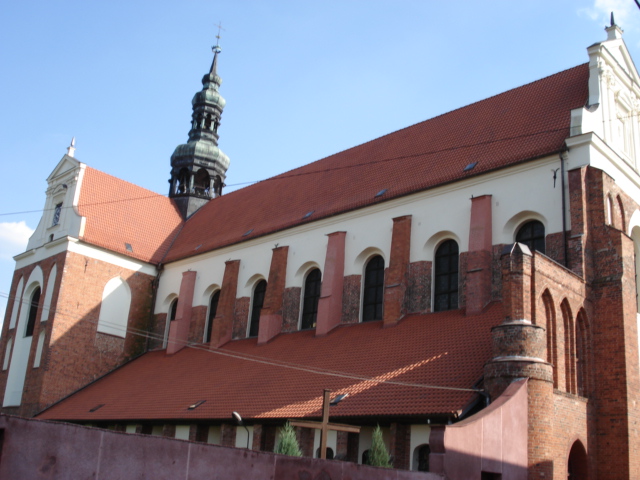 Koronowo (The official site of the city in Polish, English, German and Italian) 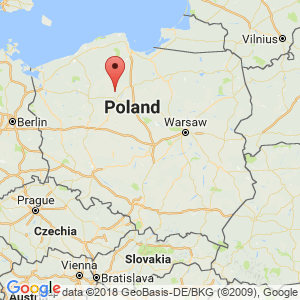