Grybów is located in eastern Małopolska, midway between Nowy Sącz and Gorlice. The city is located on highway 28, passing from Zator between Katowice and Kraków via Nowy Sącz to the Ukrainian border east of Przemyśl, which is the southernmost of the two main arteries connecting in the west-easterly direction and intersecting the Małopolska and Podkarpacie regions. The Biała River, a southern tributary to Dunajec, flows through the city from the south to the northeast. South-west of the city lies the mountain region Beskid Sądecki, to the southeast, Beskid Niski.

In 1340 an actual town was established at this place with privileges and guarantees for trade. Here, where the trade routes from the east and the south intersected, at this point there was already a settlement, which allowed for a faster development. The garment manufacturing flourished and a lime and salt industry grew. Building timber and skins, etc., were transported via trade routes. wine.
In 1620’the eras began a downturn for the city, caused by the ravages of its own and foreign troops, including especially the Swedish forces. In addition to wars of plunder and fires, the city was subject to epidemics throughout the 16th, 17th and 18th centuries. After the partition of Poland in 1772, this part of Poland was under Austrian rule, as part of the province of Galicia. However, from 1770 Grybów itself was under Austria. This situation did not stop the decay of the city, on the contrary, the poverty in the area is intensified.
Despite the fact that Austria did not support industry development in this part of Galicia, it grew during the 19th century. the number of mills and sawmills and in the town itself a woodworking business arose. The cattle trade was growing, helped along the way by a new railway line. In the vicinity, the extraction of oil on an industrial scale began.
After World War I, Grybów became the capital of a district that was abandoned in 1932. The introduction to World War II was similar to the situation in many other Polish cities. After fighting in the city on September 6 and 7, 1939, the German occupation began. In Grybów, the Germans set up a prisoner of war, a forced labor camp and three prisons. At the end of the war, when Soviet troops occupied the city, Grybów was subjected to heavy shelling for several days as a result of which approx. 2/3 of the city was destroyed.
After the war, it was time for a reconstruction of the city. New neighborhoods were also built with apartment blocks and detached houses. Cultural life flourished, including theater. A sports stadium has been erected. A tent site has been erected for the benefit of the tourists. 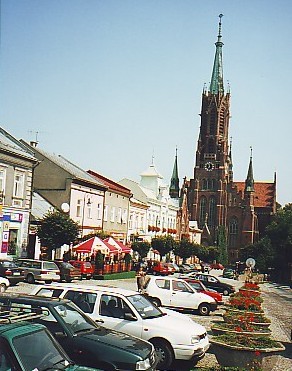 The square and the church in Grybów

Hosch Mansion (Dwór Hoschów)
The Hosch mansion is a castle that belonged to the former owners of Grybow; it rises on the southeast side of the town square. Architectural elements suggest that it was erected by the second half of 1830’s. It is a two-storey ground-walled building, erected over a floor plan that has the shape of the letter H – as in the name of Hosch. The owner of Grybów and the surrounding estates was from 1828 Józef Hosch, and it was precisely him who built the mansion. To the east and west are views terraces that rest on four pairs of columns. The exterior of the building has been preserved to the present day without significant changes, whereas the interior has to some extent been changed to adapt it to the social work performed by Caritas. To the east, a smaller garden in terraces descends towards the Biała River.
The parish church
The parish church of the Roman Catholic congregation is dedicated to the Holy Katarzyna Aleksandryjska. It is located near the main street, on the eastern side of the square, which it dominates with its tall, slender tower.
The museum in the old vicarage
The old parsonage (plebania) is a listed building, erected in larch wood in 1699; it is now furnished as a museum. Here you can see a picture of Saint Zofia with daughters (from about 1450) and a picture of Saint Sebastian from the transition between the 15th and 16th centuries. From the same period comes a picture of the Holy Family; it was bought in Gdańsk by artisans from Grybów, who had traveled to northern Poland to sell skins they had tanned themselves. A special collection is made up of a larger number of icons originating from various Greek Catholic churches. In addition to visual art, the museum also contains several valuable old prints, including several Greek-Catholic gospels and a royal letter from 1724 addressed to the craftsmen in Grybów and signed by August II Mocny.

Grybów can be a starting point for excursions in the surrounding area, e.g. to the south in the direction of Krynica, along the river Biała.
Heading east in the direction of Gorlice, you can turn south to the newly created artificial lake at the village of Klimkówka.
Szymbark (about 11 km east of Grybow)
You come to Szymbark on highway no.28 towards Gorlice. In Szymbark you can admire the small castle, a noble Renaissance castle from the first half of the 16th century. The castle stands on the steep river bank down to the river Ropa; the floor plan is square and measures 20×13 m. The castle has four, square corner towers at the height of the building, which in addition to other purposes were used for observation and defense. The castle was abandoned during the 18th century. A real renovation began in 1950. – Next to the castle is an open-air museum.
Bukowiec (about 20 km northeast of Grybow)
Near Bukowiec is the nature reserve “Diable Skały” (Devil Cliffs) with exciting rock holes, especially “Diabla Dziura” (Devil's Hole), which at an altitude of 470 meters extends 365 meters into the rock. 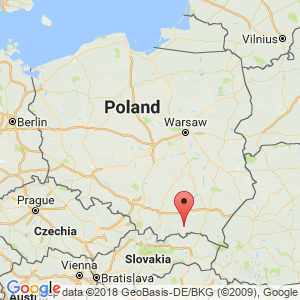