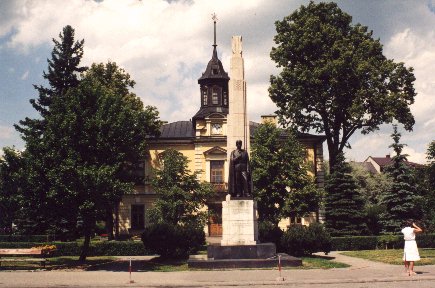 The square in Nowy Targ with the town hall and the memorial for W. Orkan

The town of Nowy Targ is located in the Orawa-Nowy Targ Valley, where the confluence of the rivers Biały Dunajec and Czarny Dunajec forms the river Dunajec. Nowy Targ is the capital of the Podhale sub-region.

Nowy Targ was granted commercial property rights by King Kazimierz the Great in 1346. At this time, the city's streets and squares were designed. There was a large, central square, from which one street to the east and one to the west. Kazimierz the Great also supported the construction of the first church dedicated to Saint Catherine, the patron saint of the city.
Thanks to numerous royal privileges and great craftsmanship, the city developed rapidly. In the 16th century, there were already 100 houses. The town was granted the right to store salt from Wieliczka and lead from Olkusz, to collect customs duties on goods from Hungary; there were regular markets in the city. (The city name means “The New Market”).
By the end of the noble Republic's time, Nowy Targ had been heavily depopulated due to fires, numerous wars and marches by his own and foreign army forces. In 1772 the city was occupied by the Austrian army.
Around 1820, Nowy Targ had 520 houses, mainly built of wood. The mail trucks started to bring the first summer visitors and tourists to the city. Following the construction of the railway line from Chabówka to Zakopane, local industry and craftsmanship were strengthened and tourist traffic grew. The well-known Thursday markets became a tradition.
During the 19th century. several public institutions were established, such as high school and hospital. The city got a rail link with Kraków and Vienna.
During World War II and the Nazi occupation, the population of the city's Jewish ghetto was bestialized; ca. 2000 people were murdered in the local cemetery. Despite terror and repression, several resistance movements appeared in the city.
Today, Nowy Targ is a significant regional center for trade, culture and sport. The famous markets, which for many years took place on Thursday, have become so extensive that they are now also held on Saturday. Everything is traded, not just – as before – with used clothing from America and the famous Nowy Targ Rulam jackets and coats. In the market you can buy everything in rulam: jackets, coats, both short and long, both light and dark, with popular patterns or without. The craftsmanship is very prominent here; In the city and the surrounding area, about 400 piling workshops work.
In and around the city there are excellent opportunities for practicing air sports, cross country skiing and skating. The residents of Nowy Targ are proud of the city's ice hockey club Wojas Podhale.
Nowy Targ is also a good starting point for excursions – by car, bike or on foot – to the scenic, ethnographic regions of Gorce, Spisz and Pieniny. The crystal blue waters of the Dunajec River and its tributaries are a paradise for anglers. 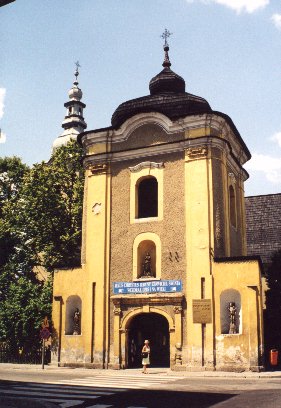 Saint Anna Church is a wooden building from the 15th century. finds a Gothic sculpture by St. John the Evangelist from the early 16th century. and a picture imaginative “Godmother with the child” (from the beginning of the 16th century)
St. Catherine's Church is from 1346 and the first walled building in Nowy Targ. The church has an octagonal choir. The entrance portal from 1764 is richly decorated in Baroque style.
City Hall the middle of the square is from the 19th century. The building houses the Podhale Museum with a permanent exhibition around the daily life of the inhabitants in this area from the end of the 19th to the beginning of the 20th century.
In the square is also the memorial to the author and poet, Władysław Orkan, who has sung the nature, people and culture of the Podhale area. The memorial was funded by the association Związek Podhalan and was erected in 1934.

Łopuszna – 5 km east of Nowy Targ.
The Church of the Holy Trinity from about 1500 is a wooden building. At the main altar there is a Gothic triptych from approx. 1460. The church bell is from approx. 1540th
Harklowa – 8 km east of Nowy Targ.
Virgin Mary Birth Church is a wooden church from approx. 1500 with Gothic images on the main altar, a bell from 1554 and a baroque baptismal font from 1731.
Dębno – 11 km east of Nowy Targ.
Archangel Michael's Church is a beautiful wooden church from approx. 1480th
Szaflary – 5 km south of Nowy Targ.
This village and its surroundings are typical of the mountain people's tradition and culture. in languages and customs. The area also has outstanding natural values with a beautiful view of both Gorce and Tatry.
Ludźmierz – 5 km west of Nowy Targ.
This is one of the oldest villages in Podhale, known as early as 1234. It is not least known for the cult of the figure Godmother from Ludźmierz – Podhale’s Queen, performed around 1400. The figure and its altar have been moved from an old wooden church to a newer church in neo-Gothic style. Here, the religious life in Podhale has unfolded for almost 600 years. Several times a year pilgrims arrive, primarily from Podhale, Spisz and Orawa – the regions at the foot of the Tatry massif.

Near Nowy Targ: View of Tatry 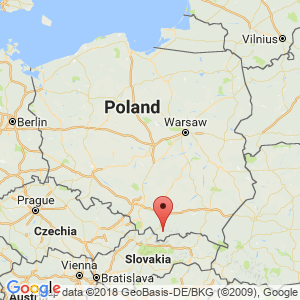