The square of Starogard Gdański. Panorama picture. To the right is the Church of Saint Catherine. – Photo by: Daniel Krawczyk
Uploaded by: Cz rniok </a>, <a href="mailto:czarniokwp.eu”>message, Talk 13:48, 7 May 2007 (UTC), Starogard Gdanski Marketplace, CC BY-SA 2.5

Starogard Gdański is located in northern Poland, south of the regional capital Gdańsk. The Wierzyca River runs through the city in a southeastern direction. At Gniew, it has its outlet in Wisła. Starogard Gdański is one of the oldest cities in Pomerania. The ethnic-cultural region in which the city is located is called Kociewie; the inhabitants here serve a special dialect. Starogard is the second largest city in this region (after Tczew).

In a document of 1198, issued by the Pomeranian prince Grzymisław, the place name Starigrod is mentioned for the first time. According to this document, First Grzymisław gave the settlement Starigrod to the Maltese Order.
Over the next 400 years, the spelling of the city name changed to Stargarde, later Staregarde and eventually to Starogard.
In 1305 Starogard was purchased by the Crusader Order. In the early 1300s, a fortification began to be erected around the city. Starogard was granted market town rights in 1348.
In 1440, the city joined Związek Pruski, whose purpose was to fight the power and influence of the Crusader Order in the East Pomeranian territory. In 1454, representatives of the city lent to the Polish king Kazimierz Jagiellończyk. In 1461, the Crusaders retook Starogard, which was subsequently besieged by the Royal Polish Army, with the result that the Crusaders left the city in 1466. Subsequently, Starogard, together with the entire region, was under the rule of the Polish King.
In the first half of the 16th century Lutheranism spread in Starogard and in 1557 the Lutherans took over the hitherto Catholic churches in the city. However, one church got the Catholics back in 1599.
In 1655, Starogard was occupied by the Swedes, who first left the city two years later. A great fire destroyed the southern part of the city in 1749.
In 1772, the Prussian army occupied Starogard in connection with Poland's first division. The Prussian rule was to last until 1920. A fire in 1792 destroyed much of the city.
January 29, 1920, the Polish army took Starogard, and the city was thus incorporated into the new Polish Republic.
On September 2, 1939, Starogard was captured by German forces, who immediately began a massive persecution and killing of the inhabitants. During the war, a total of approx. 7,000 people, including 2842 patients at the mental hospital as well as disabled children.
On March 6, 1945, the Germans were driven out of the city by Soviet forces. From now on, Starogard was ruled by Polish authorities. From 1950 the city became known by the name: Starogard Gdański. In 1974, the new regional hospital was inaugurated. On May 27, 1990, the first free elections were made to the municipal council in the post-war period. The city's 800th anniversary was celebrated in 1998.

Famous people associated with Starogard:
Kazimierz Deyna, football player (1947-1989), was born in Starogard Gdański, where he also received his basic education as a sportsman at a local club. He is considered to be one of the best Polish footballers ever.

Bymuren
The defense wall around the city is best preserved in the section to the northwest with a height of 5 meters and a width of almost 2 meters. At the transition between 1309 and 1310, – on order from the Grand Master of the Crusader Order – they began to prepare the work of expanding the village of Starogard into a fortified city. From 1313-1320, a defensive wall began to be built around the 8.4 hectares that the city then covered. The wall had a foundation of fieldstones with bastions in the corners and a moat around it. Later, access gates with gate towers were built. The work was completed in 1340.

Corner Tower
In the northwest corner of the city wall is probably the oldest defense tower.

Gdańsk Tower
is the best preserved part of the city's defense facility. The Gothic tower from about 1332 stands by the Wierzyca Canal, the former moat. Originally, the tower guarded access through the Gdańsk Gate. Later, a prison was set up in the tower.

Mill Tower (Tczew Tower)
is today a reconstruction of the original tower that was part of the city's fortification. The tower dates from the 1st quarter of the 14th century. In 1986, the upper part was recreated in half-timbered works and the roof was reconstructed.

The water tower
is also one of the four defense towers in Starogard. Its name got it because it stood near the old water gate. It was later remodeled into a city gate.

Saint Mateusz’ Church
This parish church is the oldest preserved church in the city (14th century). Initially, the church consisted only of the current choir. Since then, the church of the Crusaders was expanded with a large church ship.

Church of Saint Catherine
The church stands in the northeast corner of the old square. This three-ship church was built in 1802 instead of a medieval church, which was used by the Lutherans from 1577. The tower rebuilt in 1873 is the tallest building in the city and represents an excellent vantage point. tourists can orient themselves in the old town.

Square
is the oldest part of the current Starogard. On this side of the river Wierzyca was originally a large farm and a village belonging to Piotr Święcy. When the Crusaders bought Starogard in 1305, they began to expand the city; therefore, a central square and a number of streets exiting the square were to be constructed. This work was led by the builder Teodot of Florence. The square was square and measured 107×107 meters. the Old Town Square in Warsaw. In the middle of the square was the town hall.

City Hall
The current town hall from the beginning of the 19th century. is built on the foundation of the Gothic City Hall, which was destroyed by the fire in 1484 and rebuilt after the destruction during the war with the Swedes. In addition, a rebuild occurred in 1893.

Kociewie Area Museum
is housed in the former defense tower: Baszta Narożna (Corner Tower) and illuminates the culture of the ethnic-linguistic region in which Starogard is located.

The mill and the Wiechert mansion
The mill business in Starogard goes back to 1283, where an on-site water mill is mentioned. The mill was purchased by Franciszek Wiechert in 1871. He served well on this business and in 1893 was able to begin the construction of an impressive mansion for himself and his family. The building consists of two parts: a lower, more modest one-storey neo-Gothic section and another, the actual mansion, a richly decorated two-story Renaissance-style building. The mansion remains privately owned.

city Library
is a neo-Gothic building erected at the end of the 19th century. Before World War I, the building was an officer's casino.

barracks
The barracks complex was built in 1778-1781 by order of the Prussian King, Friedrich II.

Lakes:
Starogard is located in the lake landscape, called Pojezierze Starogardzkie , on both sides of the Wierzyca River and west of the Wisla River Valley.

Immediately northeast of the urban area is located Kochanka Lake , a flow lake covering 16.4 ha. There are good opportunities for angling. 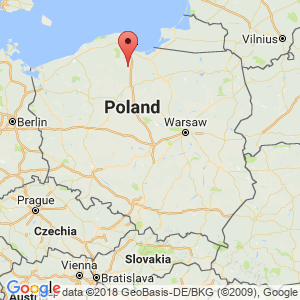