Drawing of the city of Sztum and the castle from about 1600. – Public Domain, link. – Anonymous, Sztum rysunek, mark as public domain, more details on Wikimedia Commons

Sztum is located in northern Poland, southeast of Gdańsk.
The place name is first mentioned in the historical sources in 1234 under the name Stumo. The name Sztum first appeared in the sources in 1565. Stumo was a fortified – Prussian – village, which in 1236 was occupied by the Order of the Crusader.
Between 1326 and 1333, the Crusaders built a castle here that became the residence of the town's bailiff. The area administered by the order's representative was almost similar to the current Sztum district (powiat). Where the square now exists, the Crusaders built estate buildings. During the Great War between the Poles and the Crusaders in 1409-1411, Sztum was captured by the Polish army marching from Grunwald to Malbork. After the unsuccessful siege of the Malbork castle, which lasted 3 weeks, the Polish crew in Sztum long resisted the attack of the Crusaders and they only withdrew when King Wladyslaw Jagiello ordered it.
In 1416, Sztum was granted a kind of mercantile rights by the Crusaders' Grand Master. These rights were confirmed in 1553 by the Polish king Zygmunt II August.
In 1466 Sztum and its surroundings – as a result of the peace settlement in Toruń – became part of Poland.
The church in Sztum, built after the 13-year war (1454-1466 between the Crusader state and Poland), was held from the 16th century. often collections of the landlords in the county.
During the first Swedish occupation, the city suffered greatly. After a battle lost by the Swedes, the Swedish king Gustav II Adolf sought protection on the castle in Sztum. 1709-1710 ravaged an epidemic in the city with many deaths. At the first division of Poland in 1772, Sztum came under Prussia.
In 1880 there were 2210 inhabitants. In the following years, a railway (from Toruń to Malbork), a dairy, butchery, sawmill, hospital, a Polish bank, prison and a barracks complex were built. As a result of a referendum in 1920, the city remained under Germany.
During World War II, many Polish residents were arrested, sent to concentration camps or executed. In January 1945, the German authorities left Sztum, and from April that year the Polish administration operated in the city.
During the administrative reform in 1999, Sztum came under Malbork district in the Pomeranian county. As a result of numerous protests from the inhabitants, from 1902 Sztum became the center of a district.

Sztum is a friendship town with, among others, Been in Denmark.
Famous people associated with Sztum: Actor Marta Chodorowska was born on 1.11.1981 in Sztum.

Borgen
Today, Sztum is located on a shore between two lakes as well as north of this shore. In the early Middle Ages, however, Sztum was situated on an island, as there was a connection between today's two lakes, which at that time constituted one large lake.
The city on the island was surrounded by a defensive wall with two gates, the Kwidzyn Gate and the Malbork Gate, as well as the fortress towers. The castle's buildings were built in a square, surrounded by a brick wall and – to the north, east and west – by a moat. To the north and east, the moat was separated from the lake by a narrow dam, on which the road from Malbork to Kwidzyn went. On the western shore, the island was separated from the mainland by a narrow channel, which was further deepened by the Crusades so that it could provide a natural protection.
The castle's buildings consisted of the south wing, to the west of the entrance gate and the bridge, and the grandmaster's palace, to the northwest of a hexagonal fortress tower, to the north of the armory, to the northeast of the horse stables, to the southeast of a square fortress tower, the grain magazine and the church. On the western part of the island lay the front yard, which was surrounded to the south, west and north by a wall with about 20 towers.
During the 19th century. a continuous demolition of the castle walls and a rebuilding of some of the wings.
From 1929, a number of renovations were carried out, including a reconstruction of the entrance gate. In 1945, the District Court and the District Prosecutor's Office were housed in part of the buildings.
In 1968, a museum was set up in the south wing, but it was since relocated when in 1980’the south began a renovation of the south wing.
The very active association: The Brotherhood of Knights from the Sztum area today is behind many medieval-themed events to remind the inhabitants and tourists of the city's past, such as historical dances, knight tournaments, archery shows, battles between knights on horseback or on foot. , armed with various medieval weapons.

St. Anna's Church
The parish church dedicated to St. Anna is a key element of the cityscape of the old city. The church was built after the 13-year war (1454-1466) and its present appearance got it in 1900-1901. The interior of the church is kept in a Neo-Gothic style – with elements of Baroque decoration.

Sztum is beautifully situated surrounded by lakes and forests. At the lakes many waterfowl are seen and in the forests wild game in large numbers.
Sztum is located between 2 lakes: Jezioro Sztumskie (also called Jezioro Zajezierskie) and Jezioro Barlewickie .

Hiking trails are marked in the forests. At the lakes you can practice water sports, fishing and swimming, etc. You can spend the night in tents or farms in the surrounding area (agrotourism).

Through the city itself, highway no.55 runs from Malbork in the north to Kwidzyn and Grudziądz in the south.

Sztumska Wieś
In this village south of Sztum, a memorial stone was erected to commemorate the Swedish-Polish ceasefire agreement signed here on September 12, 1635. The drawing above shows how the city of Sztum must have looked in the first half of the 17th century.

Węgry
In the village of Węgry northwest of Sztum there is a Slavic violence scene from the 11th century. 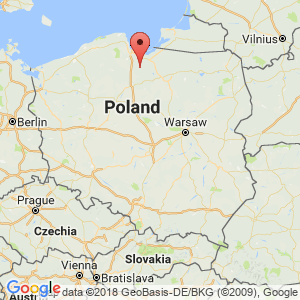