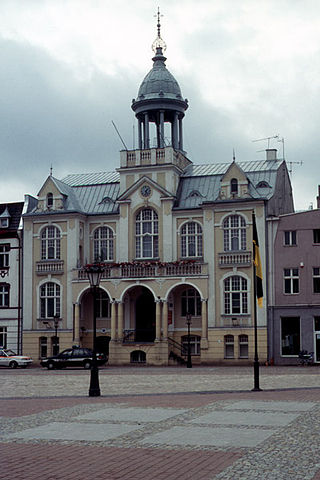 The city of Wejherowo (in Kashubian: Wejrowò) is located in the Pomeranian County of northeastern Poland, northwest of Gdańsk. Compared to Denmark, the city is approx. on the same width as Gedser.
Wejherowo is one of the most important cities (some are called the capital) in Kaszubia (po: Kaszuby, kasz .: Kaszëbë), a cultural region of northern Poland with its own regional language: Kaszubian.

One has knowledge of a Slavic settlement on Borghøjen from the time between the 7th and the 9th century. The first written information about the settlements Nanice and Śmiechowo dates from the beginning of the 14th century. These sites are today neighborhoods of Wejherowo.
In 1643, the settlement Wejherowska Wola was founded by the Pomeranian great man Jakub Wejher. From June 1643, a parish church, called the Holy Spirit Church, was erected here. In 1647, Jakub Wejher invited the monastic order to the Franciscan Reformers to reside in Wejherowska Wola. The following year, Jakub Wejher founded St. Anna's Church and the Franciscan Reformed Monastery. On January 13, 1650, King Jan Kazimierz granted the township commercial property rights; these were confirmed by King Jan III Sobieski in 1696.
The ownership of Wejherowo was taken over in 1676 by Prince Michał Kazimierz Radziwiłł. His widow gave the city in 1685 to King Jan III Sobieski.
After Poland's first division in 1773, the city was incorporated into Prussia and given the German name Neustadt. In 1818, the city became the main city in a district that included. included Puck, Sopot and the Peninsula Hel. As a result of a Prussian decree of 1834 on the abolition of monasteries, the monastery in Wejherowo was closed in 1872; the buildings were furnished for school.
In 1920 Wejherowo returned to Poland.
During World War II, in the years 1939-1940, more than 14 thousand inhabitants of Wejherowo, Gdynia, Gdańsk and Puck and several smaller towns in the surrounding area were murdered by the Germans in the Piaśnica forest approx. 10 km north of Wejherowo. Piaśnica was thus the second largest (after Stutthof / Sztutowo) execution site in Pomerania, sometimes called the Pomeranian Katyń.
After the war, in 1946, the Franciscan monks returned to Wejherowo, where they assumed responsibility for the church and the path of suffering.

Square
The square in Wejherowo bears the name Jakub Wejher’s Place, and it is the heart of the city, the central meeting place for the inhabitants, the place where many celebrations are held. Central to the square stands the memorial for the city's founder, Jakub Wejher. The most important building is the town hall, which stands on the south side of the square.

City Hall
The first town hall building emerged in 1650, when the city gained market town rights. In 1729 a more substantial building was erected and in 1908 the third town hall was built, which is still the city's architectural decoration. The current town hall has features that are reminiscent of the previous two and are built predominantly in empire style. The clock in the town hall tower dates from the 17th century and is connected to the town hall clock. On the watch you see the donor's name: Jakub Wejher and the name of the cast. Daily, at 12 noon, 3 pm and 6 pm, the Kashubian anthem from the Town Hall tower sounds.

Jesus' Path of Suffering in Wejherowo (Kalwaria Wejherowska)
was founded by Jakub Wejher in 1649-1659. Along the way, 26 small chapels have been built in respectively. Baroque, Rococo and Neo-Gothic style. Before the building of the chapels, the total length of the road and the distance between the stations had been planned, so that the length exactly matched the length of Jesus' suffering path in Jerusalem.

The genera Keyserlingk and Przebendowski’s Mansion
is built in the 18th and 19th century. From 1790 to 1945, the property belonged to the genus Keyserlingk. From 1995, the mansion houses the Museum of Kazakh-Pomeranian Literature and Music.

Trinity Church
was built in 1755, funded by Jan Przebendowski, at the site of the former church of 1644.

St. Anna's Church
is the Franciscan Order's Abbey Church, built by Jakub Wejher in 1650. It is one of the oldest building monuments in the city with a building that is without major changes over time. However, the church was extended by a few meters in the 18th century. in connection with the arrangement of a choir. Inside, the order has – against its principles so far – allowed an organ to be erected in the church. In the basement is the Museum of the Franciscan Order.

To the east, from Wejherowo is approx. 20 km to Puck Bay and thus to the Baltic Sea.
Just north of the Nanice district, the Reda River runs from west to east, where it has its outlet in Gdańsk Bay.

Highway 6 (Koszalin-Gdynia) passes the northern part of the city and separates the inner city from the Nanice district to the north.
For air services, 40 km southeast of Lech Wałęsa Airport at Rębiechowo west of Gdansk.
Ferry connection: From Gdynia, 25 km to the southeast, there is a ferry to Karlskrona in Sweden.

At the village of Dąbrówka southwest of Wejherowo lies the Military Technical Museum, erected on a 15 hectare site where rocket batteries had previously been erected to defend the Gdańsk / Gdynia area against air strikes.

Golf: At Pętkowice a few km south of Wejherowo lies the Sierra Golf Club with a professional 18 hole golf course.

Wejherowo
Powiat Wejherowski – with many information for tourists 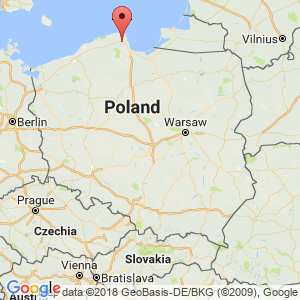