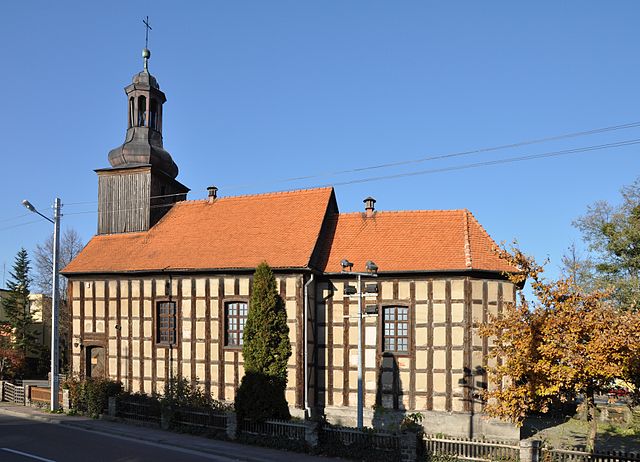 Oborniki is located 29 km north of Poznań, on the river Warta, on the southeastern edge of the large Puszcza Notecka forest area. The landscape around Oborniki is shaped during the ice age and has the character of hilly lowlands.
In this place, on the headland formed by the river Wełna’s outlet in Warta, a fortified settlement emerged in the Middle Ages, which later developed into an actual city. The settlement was located near the important road to Kołobrzeg, which was known and used as early as the 9th century.
In the years 1254-1272, Prince Bolesław Pobożny and his wife Jolenta founded a Franciscan church on the site, and it is believed that it was during this period that the city was founded. The first source mentioning the town is dated 1299, and the source also mentions Prince Władysław Łokietek’s stay in Oborniki.
In the 17th century. the city was thoroughly destroyed, partly as a result of several cholera epidemics and partly as a result of war actions, carried out by troops from Sweden and Brandenburg. The surrounding villages were also depopulated.
In 1793, the Prussian authorities created the district of Oborniki, which included 224 sites. From 1815, the Oborniki area was incorporated into the Grand Principality of Poznań. In the Polish-national uprisings of the 19th century. attended several residents of Oborniki district.
In the first half of the 20th century. a more extensive expansion of the city was begun. Oborniki has an old town where the medieval town plan is preserved.
Oborniki is now the capital of the new administrative Oborniki district (powiat), which includes the municipalities: Oborniki, Rogoźno and Ryczywół .

Square :
The town square originally dates from the 14th century. and was designed on the site of an old marketplace. On the south side are 5 Art Nouveau houses with ornate facades from the beginning of the 20th century.

St. Joseph's Church :
The church is in neo-Gothic style and erected at the transition between the 19th and 20th centuries. It was initially an evangelical church, but in 1945 it was taken over by Catholics. (See photo below) 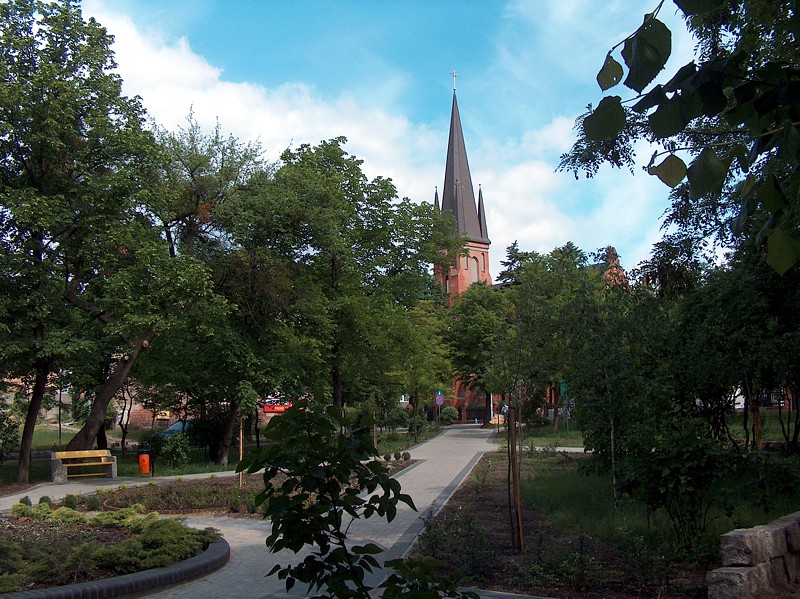 Holy Cross Church :
This church was built in half-timbered buildings in 1767. It is a one-ship church with a narrower choir and an added sacristy. The Late Baroque and Rococo style furniture mainly originates from the time surrounding the church's construction. At the main altar there is a crucifix in Gothic tradition from the mid-16th century. (See photo at the top of the page).

The Parish Church, The Most Holy Virgin Mary's Church of the Assumption :
The church is one of the oldest building monuments in Oborniki. It is mentioned in sources from 1303. Originally the church was made of wood. The current building is in the 15th-16th century. The altar is in the late Baroque style from the middle of the 18th century, a crucifix as well as the altarpieces from the 17th century.

Objezierze (8 km southwest of Oborniki):
The castle of Objezierze
(now containing: The Objezierze schools) was built in the neoclassical style in the years 1786-92 and rebuilt in 1841 and 1905. Many decorative elements have been preserved in the interior of the building. The castle is now used for school purposes, but is also accessible to visitors who want to see the permanent, historic exhibition in the building. The castle is surrounded by an English-style park of more than 8 ha. In the park is the Kościuszko hill, a memorial mound vomited in 1817 by the announcement of Tadeusz Kościuszko’s death.
St. Bartolomew's and St. Clement's Church
was built in the Romanesque style in the 12th-13th centuries. The church testifies with its equipment and epitaphs about Objezierze’s importance through time and the ruling landlord families. The oldest part of the church is the Romanesque foundation of the church ship and the tower, erected by granite squares. The rest of the present church was built of burnt bricks in 1550. The interesting furnishings include 3 altars: a main altar with a picture of the Virgin Mary by an unknown 18th century painter, St. Clement's side altar and a Mother of God pageant. In the Chapel of Jesus Heart are two tombs from the 16th century. for Andrzej Objezierski and his wife Anna. In the southern porch is a stone chapel constructed of parts of an old Slavic grinder.

Ludomy (13 km north of Oborniki):
Church of St. John the Baptist (Kościół pw Jana Chrzciciela)
is listed in 1866 in neo-Gothic style. The interior of the church is adorned with 3 altars in Gothic style. On the main altar is a picture depicting the baptism of Jesus, while the left side altar has a Mother of God image on lime tree from the 2nd half of the 16th century.
The Most Holy Virgin Mary's Immaculate Conception Church (Kościół pw Niepokalanego Poczęcia NMP)
is built 1910 in a manor park as an evangelical church. It is a modest single-ship building; the low tower ends with an bulbous dome. For now, the church is closed.

Budziszewko (about 22 km north of Oborniki)
The castle of Budziszewko
is listed in the classic style in the early 19th century. of the ieubieński family; in the second half of the 19th year. significant rebuilding took place, the parlor was converted into a Protestant chapel. In the castle there is a blackboard to remind the poet Adam Mickiewicz’ stay here.
St. James's Church
a wooden church with the shape of a Latin cross, was built in 1755. The church contains altars and sculptures in Baroque and Rococo style from the time of construction. 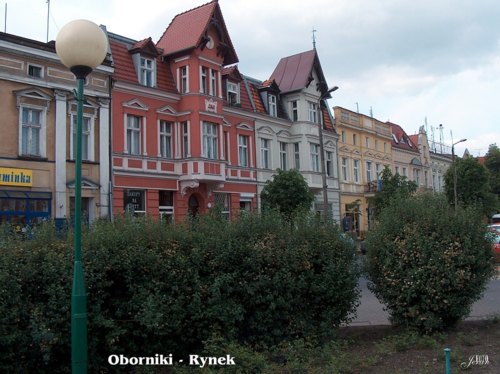 Sierniki (about 28 km north of Oborniki)
The castle
from 1804 in the classicist style as well as the castle park are among the sights of the manor architecture. The castle is one of the first buildings of its kind in Wielkopolska and a pattern for several later buildings. Indoors, the woodwork, the patterned floors, paintings and stucco are partially preserved.
Welna (12 km north of Oborniki).
The Holy Cross’ Uplifting Church
is one of the most valuable examples of the wooden architecture of Wielkopolska. The church was built in 1727 with a floor plan of the form of a Latin cross and surrounded by so-called “soboty”, ie a covered walkway around the ship. The artistic decoration of the church is due to the Franciscan monk Adam Swach of Poznań. The church is listed on a list of building monuments, under the patronage of the EU.
The castle
in late Baroque style from the third quarter of the 18th century. lies north of the church, in the northeastern part of the village. The castle was built for Marianna Kołaczkowska and Jan Franciszek Rostworowski in connection with their 1762 wedding.

Jaracz (10 km north of Oborniki, 40 km north of Poznan)
The Museum of Mill and Water-Powered Industry on the Land
The museum Jaracz Młyn is located on the main road 11, on the river Wełna and on the outskirts of the Puszcza Notecka forest area. The museum is located in the former mill buildings from the 19th century. An exhibition on the history of the mill can be seen in the mill house and in the stable belonging to the mill. The three-story watermill still has the original equipment and there is also an exhibition on the mill's technique.

Parkowo (10 km north of Oborniki)
Church of the Virgin Mary and Saint Margaret's
The first parish church on the site was built of wood. The foundation for the present brick church was laid in 1781. During World War I, the Germans removed 2 church bells as well as organ pipes from the church. In 1924, two new watches were purchased: Wojciech and Stanisław. The church has an amazing picture of Godmother of Parkowo, created by an unknown Italian painter from the transition between the 17th and the 18th century.

Rożnowo (6 km north of Oborniki)
Catherine Church (Kościół pw Św. Katarzyny)
was erected before 1798 and consecrated 28.10.1798. Above the monster is the wonderful image of the holy Anna Self-third from the 17th century. On the altars are figures from the 18th century, depicting St. Peter, St. Paul, John the Baptist, Zacharias, St. Joseph and others. Near the church stands a walled bell tower and a memorial to the great Polish uprising.

Łukowo (4 km from Oborniki)
Archangel Michael's Church
is a wooden church from 1780. Noteworthy is the image of Godmother with the child (17th century) as well as figures of Saint Hieronymus and others, the pulpit and baptismal font, made of the same tree trunk (18th century). In the porch is a memorial plaque, which tells of the poet Adam Mickiewicz’ last Christmas Mass in Poland – precisely in this church.

Wargowo (8 km south of Oborniki)
The mansion in Wargowo
was built in 1889. It was an impressive two storey building with a roof that has fallen to four sides. The later listed annex is on one floor with a high mansard roof. Where the two building parts meet, a square tower has been erected.

Bagno-Chlebowo Reserve
near the village of Podlesie, northwest of Oborniki. The reserve is 0.04 km2, of the peat bog type, and is located in the middle part of the Warta Valley. Here are rare plants such as cloth and cranberries, as well as animals such as viper and beaver. Bagno-Chlebowo is the only example in Wielkopolska of high bog reserves and was established in 1959. Outside of the reserve there is a protection zone of 200 m wide and – for the extraction of peat – a zone 100 m wide. within which it is forbidden to dig peat.

The reserve Buczyna
lies approx. 1.5 km south of the village of Nienawiszcz, northeast of Oborniki. The reserve is 0.16 km2 and located in a complex of beech forests. Here occurs beech, stalk and ebony. Elder trees are found in the lower areas.

Kończak Valley Reserve
at the village of Stobnica, about 16 km northwest of Oborniki. The reserve covers 2.36 km2, which includes the Kończak River (23 km long); here beavers, otters and snoge live. In Stobnica there is an experimental station aimed at breeding and reintroducing rare and endangered species of animals. Creation of a wolf park is planned, where wolves can be seen and photographed under conditions approaching the natural ones.

The reserve Dołęga
lies west of Oborniki, on the river Warta, near the mouth of the Samica River, and comprises 0.30 km2. The reserve has been established for scientific and didactic reasons to preserve the growing habitat of the ivory plant rock plant, which in Poland occurs quite rarely in the lowlands and only in the western, central and northern parts of the country.

The reserve Promenada
is located on the right bank of the Wełna River in the village of Wełna, northeast of Oborniki, and covers 0.04 km2. Here grows an old forest of oak and beech with many magnificent oak trees and rare forest floor plants. The reserve is also a songbird biotope.

The reserve Słonawy
Immediately west of Oborniki is a 0.30 km2 fish sanctuary and includes a section of the River Wełna until its outlet in Warta. The reserve was created to preserve breeding grounds for fish, including i.a. salmon, trout and stables.

The reserve of Wełna
lies between the villages of Wełna and Jaracz, northeast of Oborniki and comprises 0.10 km2, including a section of 3.5 km of the river Wełna. Picturesque twists, along with the rock bottom, give this river section the character of a mountain river. Here is a fauna and flora characteristic of fast-flowing rivers. 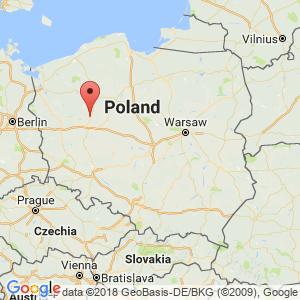