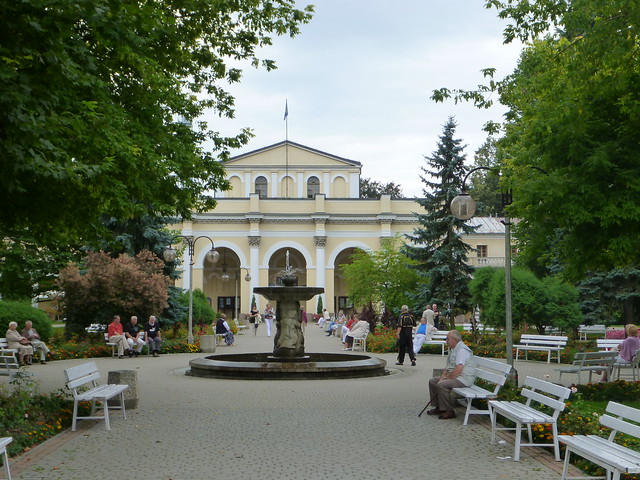 The bus park in Busko-Zdrój with the sanatorium Marconi. – Photo by: Eric Hayward on Flickr

Busko-Zdrój is located in the southern part of the Holy Cross region (Województwo Świętokrzyskie), south of the regional capital Kielce and thus also south of the Góry Świętokrzyskie mountain range. The town is located on the edge of the Szaniecki Park Krajobrazowy Landscape Park. Busko-Zdrój is known as a health resort.
Busko’s history goes back to the 12th century, when the first Norbertine Nuns (the Order of the Demonstrator) arrived at the site. From 1241, Busko was owned by the Nunnery for several hundred years. In 1287, Busko was granted commercial property rights. In the 15th year. the city was granted the right to hold a weekly market as well as 2 major markets annually. The town lived especially on cloth making and trading. In 1776 salt springs were found by the town and an extraction of salt was begun. In 1808, the first investigations into the healing effects of the local water were conducted, and the first caterers, called bathers, began arriving at Busko. In 1819, the property of the Norbertine people was taken over by the public. After a fire in 1820, Busko was taken over in the lease by General Feliks Rzewuski; this one would further exploit the positive effects of the local mineral water and erected a water park designed by renowned Italian-born architect Henryk (Enrico) Marconi. In 1836 the health resort was officially inaugurated. The city was deprived of the city rights by the Russian authorities in 1869, but the health resort continued to function and gained wide popularity, not just in the Polish-speaking areas. During World War I, the city came under Austrian occupation. In 1916, Busko was again granted market town rights. After the war, the visitors returned, and the cure facilities were greatly expanded in the interwar period. During World War II and the occupation, the city was the center of several party actions facing the German forces and Gestapo. After this war, Busko was the administrative center for the villages and rural areas of the surrounding agricultural region. But the city's development was still mainly due to the spa. Today, Busko-Zdrój is a holiday and health resort and center city in the district of the same name. The agricultural areas around the city are characterized by orchards and vegetable growing; Something new is also focused on tourism with offers on farm holidays (agrotourism). 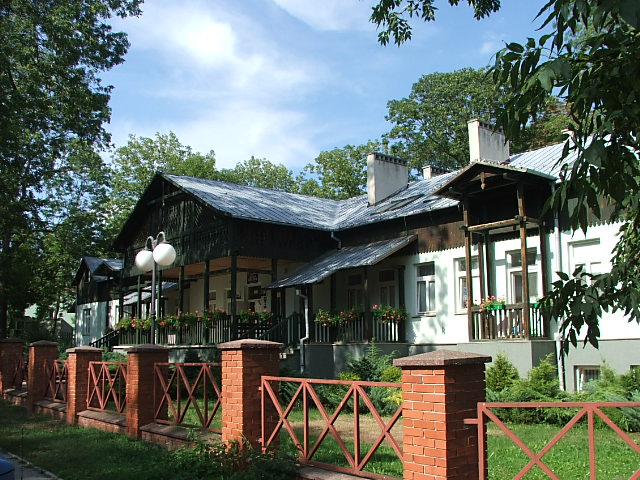 Busko-Zdrój: A small sanatorium at the spa, near the spa park

The health resort
with the sanatoriums and the spa park is south of the city center.
In 1784, Busko was visited by three well-known geologists who unanimously found that the mineral water from the local springs had an unusually high salt content. At the end of the 18th century. approx. 259 tonnes of salt from the deposits at Busko. The extraction ceased in 1796, namely at the time when Busko was incorporated into Austria; the areas now under Austria had other salt mines. In 1808, the local physician began using the local mineral water for healing purposes. Between 1825 and 1835 the number of traveling cure patients increased significantly. One of the patients was the town's lessee, Feliks Rzewuski, who suffered from chronic rheumatism. When he was able to personally see the good results of the treatment, he founded a company, made up of shareholders from Warsaw, for the purpose of establishing and operating a regular health resort. The first waterpark – designed by Henryk Marconi – was opened in 1836; it was built in an extensive park, built by Ignacy Hanusz. The spa developed quickly and new spa buildings came along, as did the number of visitors. By the end of the 19th century. Busko was counted among the most valuable and most visited health resorts in Europe. In the year 1899, 2431 persons were treated in Busko. A treatment especially of sick children began in 1918; a children's sanctuary was inaugurated in 1927. During World War II, significant destruction took place on the site, but a rebuilding started immediately after the liberation. From the early 1960s’several new sanatoriums were erected, including a new center for pediatric patients, as well as boarding houses near the health resort.
Sanatorium Marconi
This building is the first water park in Busko, built in 1836, designed by architect Henryk (Enrico) Marconi and built in the park, now called the Kurparken.
St. Leonard's Church
This wooden church from 1699 stands in the cemetery where you can also see the burial ground of the spa's founder, General Feliks Rzewuski.
The former Norbertine monastery with monastic church
The abbey complex was originally built of wood from the end of the 12th century, later rebuilt in Gothic style around 1470. After a fire, it was rebuilt in the years 1592-1621 in Baroque / Classicist style.

Busko-Zdrój – The municipality's page on tourism. In Polish, German, English, French and Ukrainian