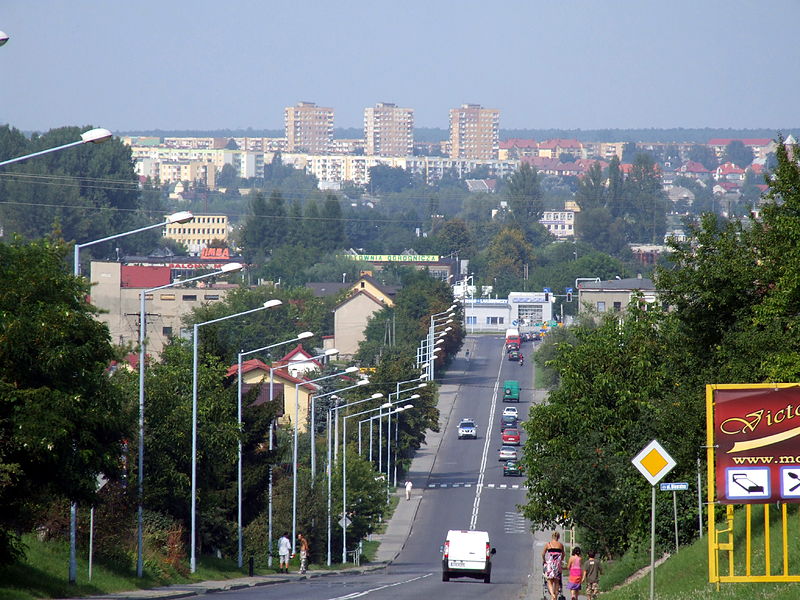 The southbound street ul.Opatowska in Ostrowiec Świętokrzyski. In the background you can see the high-rise buildings in the Rosochy neighborhood. – Photo by: Krugerr, Ostrowiec Opatowska Street, CC BY-SA 4.0

The town of Ostrowiec Świętokrzyski is located east / northeast of the regional capital Kielce in southeastern Poland.

The first records of the village that marked the beginning of the present city date from the 14th century. This village lay on the river Kamienna’s right bank. The present city was built on the left bank of the river since about 1597. The city acquired commercial property in 1613. Throughout the years, the town was owned by several well-known mainland families. At the end of the 18th century. and in the 19th century. the industry in the area – especially ironworks – developed with support from Kamienna hydroelectric power and its tributaries and based on local deposits of coal and iron ore.
During World War II, many residents participated in the resistance movement. Ca. 11,000 Jews from the city were murdered by the Germans. In 1990’the local ironworks went bankrupt; it was later acquired by a Spanish group. The business development in the city was moving towards several small industries and craft companies at the same time as several municipal companies emerged, including a heat plant.

The Collegiate Church dedicated to the Archangel Sankt Michael
The church dates from the beginning of the 17th century. In 1920’The church was rebuilt in neo-Baroque style according to drawings by Stefan Szyller.

Bishop Stanisław’s Church
in the district of Denków was built in 1700 Baroque style and rebuilt in 1904.

The castle and park facility in the Częstocice district
(on the right bank) includes the mansion that formerly belonged to the Countess Wielopolski: it was built 1887-99. The building now houses the Historical-Archaeological Museum.

Tarnowski Palace
A former hunting castle, built about 1820. Both during and after World War II, the mansion was used for many different purposes: German officer's casino (during the war), hospital, school. Now the building is furnished for hotel.

The Church of the Sacred Heart of Jesus
The church is built of wood and is located on Sandomierz Street. It was built in Zakopane style in 1932 by drawings by Tadeusz Rekwirowicz.

The former post office
from the transition between the 18th and 19th century. at Szeroka Street.

The Jewish cemetery
The cemetery was in use from 1730’to the end of World War II.

The statue of Saint Florian
from 1776 at St. Florian's Square.

The town is flooded by the river Kamienna, which runs from here to the north and has its outlet in Wisła on the left bank of this river. Local residents and tourists alike use Kamienna for kayaking. 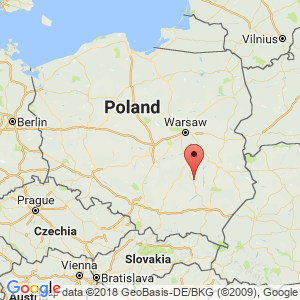