View of Łagów from the east.

Łagów is surrounded by forests and lakes in Łagów Lake Land, a moraine landscape from the Ice Age. The oldest part of Łagów was built on a shingle between Lake Ciecz and Lake næragów near the beautiful beech forests that today form the Łagów Landscape Park.
According to Brandenburg sources, a village existed here as early as 1227. In 1347, Łagów, together with other properties, was mortgaged by the Count of Ludwig to the Order of Johanniter. This order, a hospital fraternity that was transformed into a knight's order, always considered nursing – alongside the fight against the unbelievers – as their most important obligation. The order owned 18 villages in the area as well as the town of Sulęcin.
The castle in Łagów originated in its original form in the Middle Ages (14th century). The fortified castle was erected on an artificially created elevation and was surrounded on all sides by strong defensive walls. In the second half of the 17th century, after the end of the 30-year war, the most significant part of the current buildings was erected. The present castle has four wings on two floors and an inner courtyard. In the southeast corner rises the 35-meter-high tower that was damaged by fires in 1758 and 1842.
In the year 1569 the settlement burned outside the castle.
The urban settlements in Łagów were granted several privileges in the years 1705-35, including the right to charge excise and to hold markets; these privileges were considered in their entirety as marketplace rights.
The Order of Johannite was repealed in Prussia by a royal decree in 1810, and its property was taken over by the state. In the year 1819, part of the former property of the Order, initially with the exception of the castle, was left to the von Zastrow family to replace lost property. Later, the castle was also acquired.
From that point on, the castle changed with the land owner several times. The city gradually lost its importance.
In 1932, Łagów lost its market town rights.
In recent years, the city has become a holiday resort, not only for Poles, but also for guests from eastern Germany and Berlin. 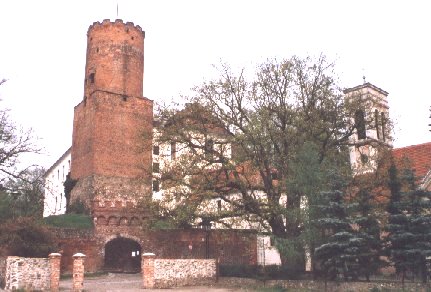 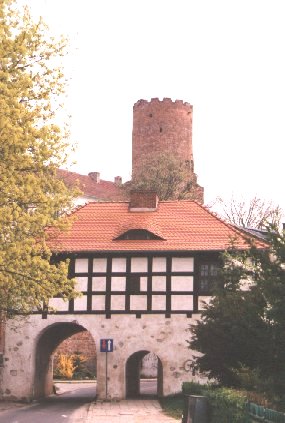 The old Town
is a quite small town with an interesting city plan, located at the foot of the castle of Johanniter and bounded by a defensive wall and two gates.

Johanniterborgen
is listed in the middle of the 14th century. on an artificially created elevation between the two lakes and has since expanded. The oldest part is the tower and the west wing. Today, the castle has Gothic and Baroque building features. It was built over a square floor plan with four wings, courtyard and corner tower. From the tower there is a beautiful view of the surrounding area. Inside the castle is the Gothic hall with cross vaults resting on columns. In the hall of knights you can see a fireplace in Baroque style from approx. 1740. The defensive walls surrounding the castle date from the second half of the 14th century. In the 16th century. they were elevated to a height of 9 meters. – The castle today houses a hotel, restaurant and café.

The town gates
There are two city gates: the Gothic Brama Polska from the 15th century. (see photo below) and Brama Marchijska from the 16th century; the last one is set in stone below, while the upper part is made in half-timber. (See image above). Between the gates is a 120 meter long street with listed houses from the first half of the 19th century.

Half-timbered
from the transition between the 18th and 19th century.

The Church of John the Baptist (Kościół Św. Jana Chrzciciela)
from 1726 is in neoclassical style; remodeled in 1887. 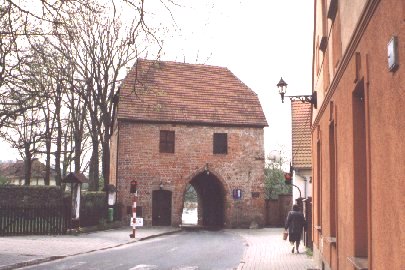 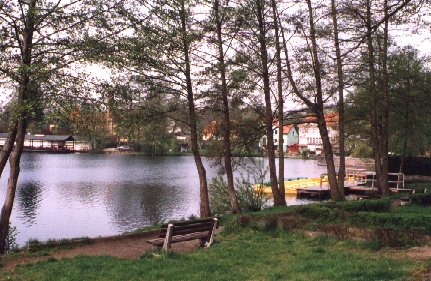 Glimpses of the city as seen across Lake Łagów. 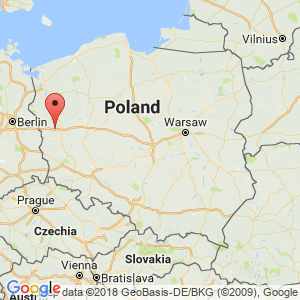