Slag Mountains at Rydułtowy, formed as a result of mining. The mountain that has been named “Szarlota”, is 134 m high. – Photo by: Utoplec, Keep w rydultowach, CC BY-SA 3.0

Rydułtowy is located in southern Poland, in Upper Silesia, southwest of Katowice.
The subsoil beneath the area where the city is located contains rich deposits from the carbon period. Rydułtowy is therefore the center of significant coal extraction. In addition, gravel and clay are also extracted. The majority of the inhabitants are employed by the coal mine Rydułtowy-Anna or one of the service companies operated by the mine.
The slightly special name of the settlement goes back to the man's name Rudolf, probably the name of the first owner of the then village.
By merging several villages, Rydułtowy became an independent municipality in 1926. In 1951, the city was granted commercial property rights, which were deprived of the city in 1975 due to a new administrative division. In 1992, the city gained new rights as a market town.

To the south there are only a few kilometers to the Czech border. To the north extends the large forest area of Lasy Raciborskie. 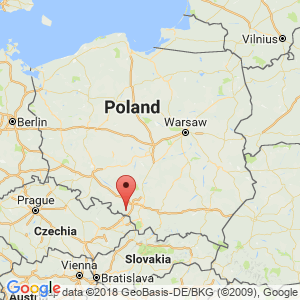