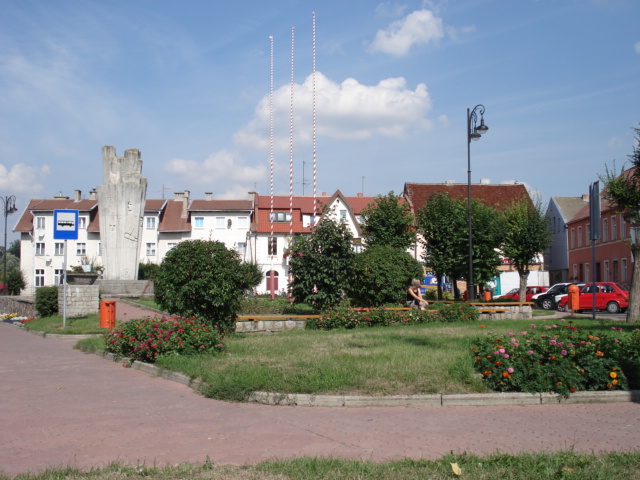 Place Wolności in the center of Sępólno Krajeńskie. In the square you will see the Battle and Martyrdom Memorial

Sępólno Krajeńskie is located on Lake Sępólno in the northwestern part of Kuyavian-Pomeranian County – on the main road between Koszalin and Bydgoszcz.
The word Sępólno comes from a Slavic word meaning “clashing fields” or “flat landscape”.
The largest company in the city is a factory that makes office furniture.

The Krajna area remained in the second half of the 10th year. placed under the realm of the Poles. The first records in the chronicle of a settlement on the site where the town now stands are dated 1113. From 1314 the area was part of the old Kalisz county (until 1793). King Kazimierz the Great granted the city commercial property rights in 1360.
Initially, the city was located solely along the Sępolenka River. Since then, the course of the river was changed and the city was expanded on the higher shores around the lake. The first known owner of Sępólno was Hektor Ostroróg, who belonged to a very well-known family at that time. In 1359 he erected a church in the city, consecrated to St. Bartłomiej (Bartholomew).
At the beginning of the 1400s, the city was repeatedly seized and burned by the Crusaders; however, the church avoided destruction. During the 13-year war with the Crusader Order in the mid-1400s, Sępólno came into the hands of the Order. Only after the peace was concluded in 1466 did the threat from the Crusaders come more distant. From the late 1400s, some development occurred in the city; Among other things, a brewery was founded. The Zebrzydowski family, which had owned the town for a long time, in 1644 allowed Jews to settle here – primarily for the purpose of boosting local trade.
During the wars with the Swedes – in 1655 – the city briefly came under Swedish rule. At the same time, a plague erupted, eradicating over 1,000 of the city's inhabitants.
As a result of Poland's first division in 1772, Sępólno came under Prussia; the city was henceforth called by its German name, Zempelburg.
By 1875, the number of inhabitants had increased to 3,516. In 1894, the construction of the Chojnice-Sępólno-Więcbork-Nakło railway line was completed. In 1896 a new town hall was erected in a converted residential building; the same year a new post office was erected.
After Poland was reborn after World War I, Sępólno Krajeńskie became the center city of a district under the Pomeranian county.
At the outbreak of World War II, German forces crossed the Polish border a few kilometers west of Sępólno. After a strong initial bombardment, the city was quickly taken over.
In the years following the war, the city belonged for a period (1975-1998) under the county of Bydgoszcz.

St. Bartholomew's Church
listed at the transition between the 18th and 19th century.

The memorial for battle and martyrdom
at Plac Wolności. It is a memorial to the fallen in the struggles for the city's independence. Traveled in 1969.

The city's nickname comes off “Krajna”, the name of a historic landscape located between Wielkopolska and Kaszuby, sometimes counted to northern Wielkopolska, sometimes to Pomerania. “Krajna” means the outskirts or border area, here understood as the outskirts of the Poles kingdom and later as the outskirts of Wielkopolska. Historically, it was a border area where the territories inhabited by the Slavic tribes Polanie (Polanians) and Pomorzanie (Pomeranian) clashed. Today, however, it is known that the concrete boundary between these territories was the river Noteć, ie. that Krajna was on the Pomeranian side.
The most distinctive feature of the area is the Krajna (Pojezierze Krajeńskie) lake landscape, formed during the last ice age. The land just around the city is interpreted as a landscape park (Krajeński Park Krajobrazowy).
The forests in the surrounding area are a favorite destination for excursions by foot, bike and horse.
In the area there are a large number of lakes, which offers numerous opportunities for swimming, angling, kayaking and other water sports.
The nearby lake, Jezioro Sępoleńskie, reaches all the way to the center of Sępólno. On this lake, races are held every year during the month of August-September.
Other nearby lakes are e.g. Jezioro Niechorz to the southeast and Jezioro Więcborskie to the south. 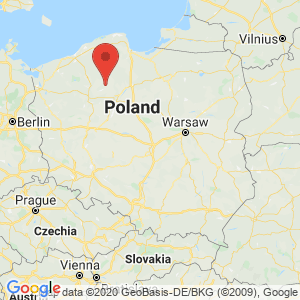