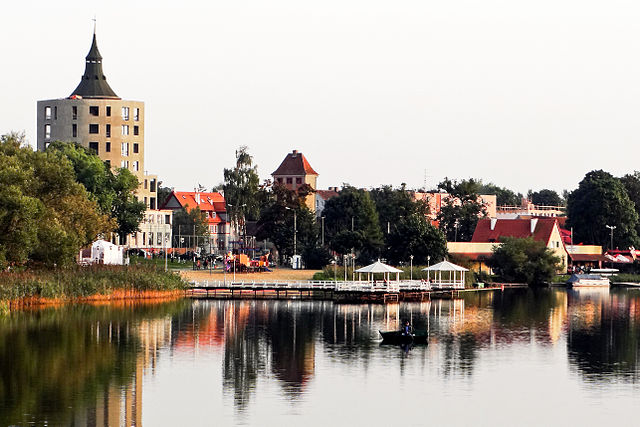 Szczytno seen from the lake with the water tower on the left. – Photo by: Zbigniew Czernik, Szczytno – widok na jezioro, CC BY-SA 3.0

Szczytno is located in Mazury (Masuria) in northeastern Poland, 47 km southeast of the regional capital Olsztyn. The town is located on the border between the lake landscapes of Olsztyn (to the west / northwest) and Mrągowo (to the northeast). The area is thus rich in both smaller and larger lakes as well as forests. 47% of the surrounding rural area consists of forest, 40% of agricultural land.
Before the 13th century. There was a settlement on the site, populated especially by beekeepers, who here in the Masurian primeval forest performed their ancient and traditional professions. Between 1260 and 1266, the Crusaders built a wooden castle at this place; however, it was burnt down in Lithuania in 1370. Afterwards, the Crusaders erected a new, walled castle on the peninsula between the two lakes and eventually expanded it into a strong fortress, surrounded by ramparts and moat.
The names of the two lakes were in Latin: “Sciten Minor” and “Sciten Maior”. The name of the comet under the Crusader order that founded the castle was Ortolf of Trewir. After him, the castle and town were named Ortolfsburg, later changed to Ortelsburg. However, the Slavic population in the vicinity called the place of Szczytno, derived from the aforementioned name of the lakes.
Szczytno was conquered twice by the Poles: in 1410 and during the 13-year war (1454-1466). After 1466 Szczytno belonged to the State of Order, after 1525 to the Duchy of Prussia. Around the castle, an urban community developed, mainly populated by settlers from Mazowsze. At the beginning of the 17th century. got the city the right to brew beer. From 1616 Szczytno is described as a city. Actual merchant city rights gained the city in 1723.Szczytno was the center of Polish-national movements; several Polish organizations, newspapers and magazines emerged. Szczytno, which was significantly destroyed during the two world wars, became Polish again in 1945. The city's business enterprises include. herbalism, textile, timber and food industry.
Among other things. to promote tourism, an airport was built in 1996: Szczytno-Szymany (owned by the company: Porty Lotnicze Mazury-Szczytno), located 10 km south of Szczytno’s center (at the village of Szymany) and 58 km from the Olsztyn regional center. It is the only airport with passenger traffic in this part of Poland, with regular connections to Western Europe. 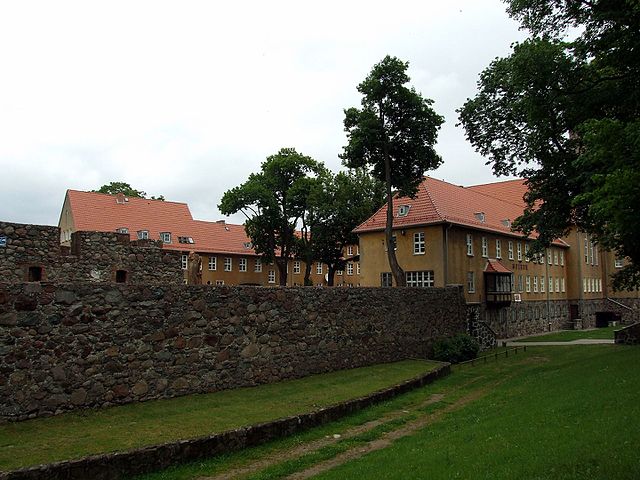 In the foreground the ruins of the castle of Szczytno, in the background the town hall. – Photo by: Modris Putns, Szczytno castle – panoramio, CC BY-SA 3.0

Crusader fortress:
There are only ruins left of the Crusader Castle from the 14th century. In the 15th and 16th centuries, the castle was repeatedly the subject of battles between Crusaders and Poles. After a rebuilding in 1579-81, the castle was mainly used as a hunting residence for Prussian princes. In 1656 – during a Tatar attack – the castle was used for the last time for defense purposes. Towards the end of the 18th century. ceased the official functions of the castle; the buildings were decaying more and more and some were demolished. In 1925 a regional museum was established: Heimatmuseum Kreis Ortelsburg in the buildings. Later, just after the Second World War, the same site was created The Masurian Museum, which was built over the collections of the German Museum. After several futile attempts to rebuild the castle as a whole, it was preserved as ruin. The west side of the ruins is adjacent to the current town hall, which is thus built on the grounds of the castle.

City Hall:
The current town hall building was erected between 1936 and 1937, designed by architect Kurt Frick of Königsberg, on parts of the castle's ruins. The building has a four-sided floor plan with an inner courtyard and a 46-meter high tower in the southeast corner. The city authorities had decided that the building's architecture should partly meet the modern requirements and partly reflect the site's historical traditions. A sculpture by the great Polish poet Henryk Sienkiewicz stands at the entrance to the town hall. I Sienkiewicz’ novel “Crusaders” Szczytno is described as the seat of the Crusader comet.

The Masurian Museum
Since 1948, the museum has been located in the eastern and southern wings of the town hall. The collections include over 4,000 items in archeology, history, crafts, military engineering, coinage, ethnography and wildlife from the southern part of the Mazury region (Masuria). The large ethnographic department describes the Masurian, folk culture. Interesting are the collection of Masurian furnace tiles and ceramics.

The Evangelical-Augsburg Church:
This city's oldest church can be found in Warsaw Street. A wooden church was found on the site in the 15th century. After 1525, the church was used by both Protestants and Catholics. After several fires, a Baroque-style stone church was erected in 1717-19.

The Masurian Cottage (Chata Mazurska):
This remarkable wooden building on Maria Konopnicka Street dates from the 19th century. and is a beautiful example of old, local building style. The Company of Szczytno’s Friends are housed here, and the building houses an interesting exhibition of old household and agricultural implements.

Booking.com
In the forests around the city, several cottages and guest houses are picturesque on the lakes Domowe Duże and Domowe Małe. 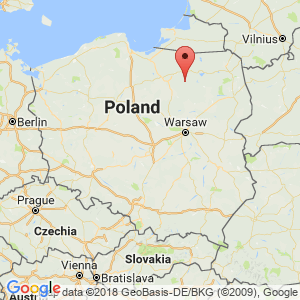