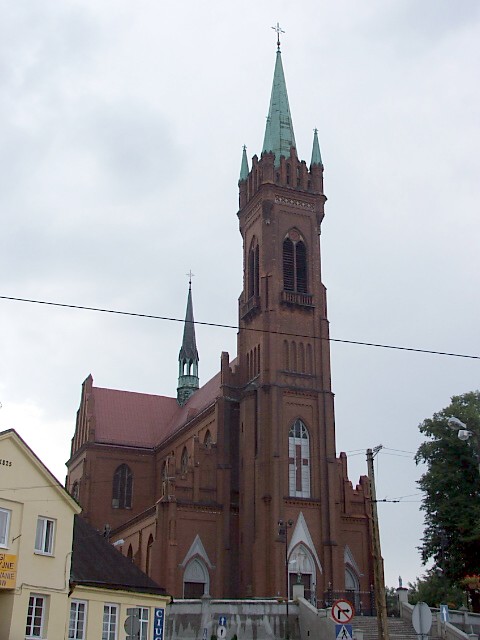 Catherine of Alexandria’s Church in Zgierz

The town of Zgierz is located in central Poland, immediately north of the metropolis Łódź, so close that the two urban areas have now grown together. The river Bzura, a tributary to Wisła, runs through the city.

Zgierz is one of the oldest cities in the Łódź region. Already in the 3rd – 4th year. There was a settlement here – in the Bzura River Valley. Traces of small wooden houses, household articles, tools, weapons, jewelery and tombs have been found. Part of the House Council seems to have been imported from the Roman Empire,
The first mention of Zgierz in the written sources is dated March 23, 1231. At a gathering on the occasion of Easter, among other things. Prince Konrad I Mazowiecki with his 4 children. In the first half of the 13th century. founded a church, dedicated to Saint Mikołaj. In a writ of 1288, it is mentioned that Zgierz is the oldest city in Łódź County. That Zgierz is referred to as one “town” will include say it was the center of a local government.
A document from 1318 shows that before 1288 Zgierz was a city with its own customs chamber. That is to say, Zgierz gained market town rights at some point before 1318. In 1420, the town's market town rights were renewed by Władysław Jagiełło. In 1495, King Jan Olbracht granted the inhabitants of Zgierz exemption from miscellaneous taxes for the next 10 years.
In 1504, King Aleksander Jagiellończyk approved that a market could be held in Zgierz every Monday as well as 3 annual markets, namely on Palm Sunday, at Pentecost and on November 25 (St. Catherine's Day). A font from approx. 1511 mentions that the city church is consecrated to St. Catherine. King Zygmunt the Old, in 1522, gave Zgierz tax relief for 12 years as financial aid following a fire in the city.
In 1564, Zgierz included 120 houses and 774 inhabitants, of which 13 were brewers, 7 bar owners and 33 craftsmen. The Swedish wars in the mid-17th century caused devastation and the population dropped drastically.
In 1793, Zgierz came as a result of Poland's second division under Prussian rule. At that time, the city contained only 315 inhabitants and 64 residential houses. Between 1817 and 1820, 23 foreign dressmakers settled in Zgierz. In 1821, an agreement entered into between Mazowsze county and the dressmaker's profession regarding the foreign dressmaker's settlement and right to work in Zgierz, including the establishment of small factory companies. Over the years, this led to Zgierz becoming one of the centers of clothing making and clothing trade in the Polish Kingdom.
In 1847 a town hall building was erected. In 1860, 5 factories in Zgierz were powered by steam power. There were now 12,016 inhabitants, of which 5,242 Poles, 4,170 Germans and 2,601 Jews. The number of houses was 456, of which 95 were foundation walls. There were 3 hotels, 24 inns, 18 wind turbines, a library and a pharmacy.
Mid 1880’the eras occurred 2 bookstores in the city; one of them also contained a small printing press. The city's evangelical congregation founded in 1889 is home to the incurably sick, disabled and homeless. In 1895 there are 48 larger and 64 smaller factories in Zgierz. The first general census was conducted in 1897, which showed that the city of Zgierz had a total of 19,108 inhabitants. In 1901, the tram line connecting Zgierz to Łódź was built. In 1903, Zgierz got a rail link with Łódź and Łowicz. In 1905 and 1906 there were many strikes, undertaken by factory workers and young people respectively, to which a general strike came in December 1905.
In 1913, there were 21,723 inhabitants. In the same year, the municipal public library, named after the author Bolesław Prus, emerged. At the beginning of World War I in 1914, the city was occupied by the German army. At the end of the war in 1918, the German soldiers in Zgierz were disarmed by the Polish Military Organization. In December of that year, the Zgierz branch of the Polish Communist Party was founded.
In 1927, a municipal swimming pool was built, which housed the first swimming pool in Poland. In 1928, the number of industrial companies had grown to 128, of which 96 were woolen weavers. Just before World War II, in 1938, Zgierz numbered 27,853 inhabitants.
Immediately in early September 1939, the city was bombed by the German Luftwaffe, and a few days later Zgierz was captured by German forces. In the same month, the Nazis made the first executions of Zgierz residents. In March 1942, 100 Poles were executed in public for revenge for the killing of 2 German policemen. 161 people were arrested and sent to concentration camp. Between 1 August and 2 October 1944, approx. 50 people from Zgierz during the Warsaw Uprising. During World War II, more than 7,000 inhabitants perished in executions, living and murder in KZ camps, during forced labor, etc. Over 8,000 people from Zgierz were sent to Germany as forced laborers. Throughout the occupation, German raids took place and thefts of raw materials, semi-finished products and finished industrial products. On January 17, 1945, Zgierz was taken in by divisions of the 1st Armored Arm and the 8th Armored Guard under the 1st Belarusian Front, by which the city was liberated from the German occupation.
In 1951, Zgierz was separated from the Łódź district; a separate administrative district was formed that included the town of Zgierz. The urban area was expanded in 1954 with 7 surrounding villages. In 1955, the city numbered 32,100 residents. In 1968, the new Zgierz Wool Factory was inaugurated “Zeltor”. By 1970, the population had risen to 43,025. In 1973, a polyurethane foam production and processing plant started “Polopren” its business. In 1978, the population exceeded 50,000. Now – instead of a mayor – a president was at the head of the city government. In 1988, Zgierz was again expanded with 7 nearby villages.
In 1990 – after the system change – the first free municipal elections were made after the war. By the 1999 municipal reform, Zgierz became the center city of a new district.

Weaver houses
Wooden houses from the 19th century. inhabited originally by weavers. The houses are located in the city center and witness the wave of weavers who came to Zgierz and settled here.

Catherine of Alexandria’s Church,
the city's parish church was built in 1910-1924 in neo-Gothic style. During World War II, the church was closed for worship, instead the occupying power used the church as a magazine for the army. The tower was renovated in 2013.

Christ the King's Church
The church was built in 1907 by the old Catholic Mariavite Church – in neo-Gothic style. In 1947 the church was taken over by the Roman Catholic Church. 1947-1949 the church was a garrison church, then a branch church and then a parish church.

The municipal water park
from 1926.

City Museum
The building dates from 1828 in a classicist style. The projecting facade part (risalit) is crowned by an attic adorned with, among other things. stone lions. From 1840’By 1945, the building was owned by the Zippel family.

Place Stu Straconych
(The Hundred Executed Square). Execution site for 100 Poles in March 1942. The square has a memorial for the dead.

Bzura
The river Bzura is a typical lowland river. It originates further east on a terrain of about 238 meters above sea level, and has its outlet in Wisła to the northeast at Wyszogród, where the altitude of the sea has dropped to 60 m. . Bzura is one of the smaller rivers in Poland (no. 25 in length). Near the center of Zgierz, the river expands to a lake located in the city park; the lake covers half the park. Just west of the park is the swimming pool. 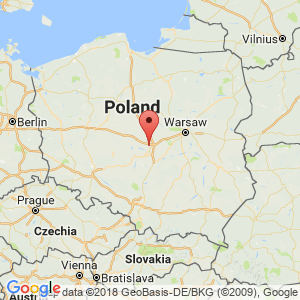