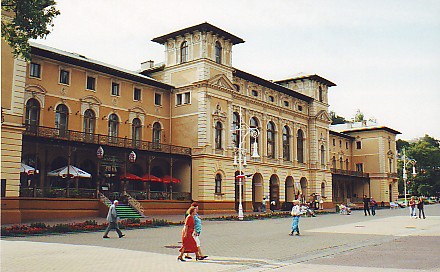 The spa town of Krynica is located in southern Małopolska, on the eastern edge of the Beskid Sądecki mountain range and within the boundaries of Poprad Nature Park. To the west rises the mountain Góra Krzyżowa (813 m), further to the west the somewhat higher Jaworzyna (1114 m), to the southeast Góra Parkowa (741 m). The city itself is at an altitude of approx. 560 m.
Krynica existed even before 1547, which is a letter of privilege from that time. The city's later development is linked to the healing effect of the water from the local mineral water sources found in the 17th century. In 1794, the first spa building was built: Mały Domek (The Little House), which from 1804 contained the first health spa.
In 1807, Krynica was officially designated a health spa. This spa town thus has long and proud traditions. 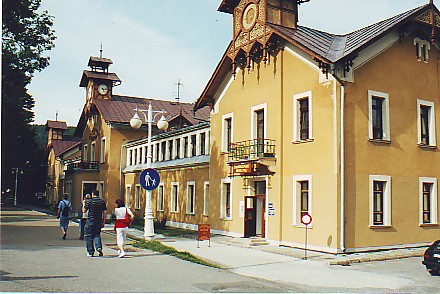 Especially from the mid-1850s there was a strong development of the spa town and its facilities. For example, the Old Mineral Water Bath, the Old Mud Bath, the Kurhuset, the wooden building Pijalnia Główna, where the guests drank the mineral water from the springs, several guesthouses and a theater: Theater Modrzewiowy. By the end of the 19th century. Krynica was most fashionable as an elitist resort and meeting place for well-known Poles in the cultural life. Krynica is linked to the famous tenor Jan Kiepura’s name that lived here a large part of his life, as well as the primitivist painter Nikifor, called Nikifor Krynicki.
After the First World War, when the Polish authorities took over the city, The New Mineral Water Bath and the New Spa House. During the interwar period, Krynica also developed into a well-known winter sports resort. In 1938, the number of surrogates who arrived in Krynica to receive treatment had grown to approx. 40,000 annually.
After the Second World War the spa was further expanded with several sanatoriums, new Pijalnia Główna with drinking facilities, tennis courts etc. The biggest investment in recent years is the gondola course leading to the top of Jaworzyna, as well as a large sports hall.
Krynica is still the most famous health resort in Poland. 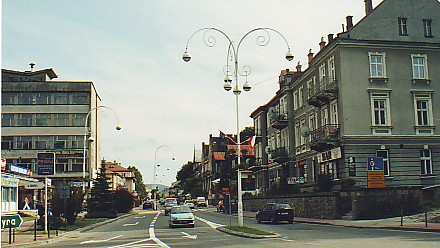 Central Krynica. The street ul.Kraszewskiego seen from the entrance to the Kurparken in a southerly direction

Pijalnia Główna (in the spa park)
The name means: Drink house or Drinking place. Here the guests (and tourists) can enjoy the spring water from 6 different sources. The water has a beneficial effect in connection with several disorders. The building was built in steel and glass in 1971 as a replacement for the former building. The large floor of the building is adorned by many plants that give an exotic, tropical-like feel. 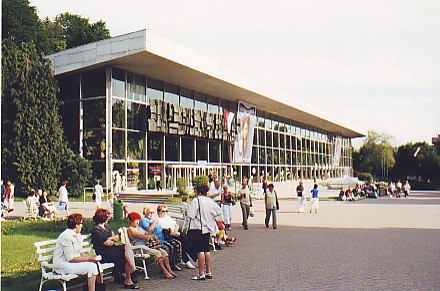 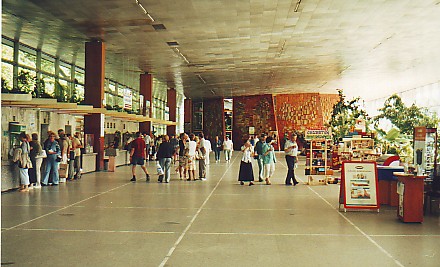 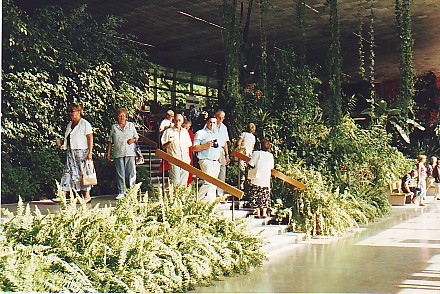 Pijalnia Główna. From the entrance

The Old Spa House (in the spa park)
This spa house is one of the most beautiful neo-Renaissance-style buildings in Poland (from 1889), designed by Jan Zawiejski – with a beautiful ballroom.
The bandstand in the spa park. 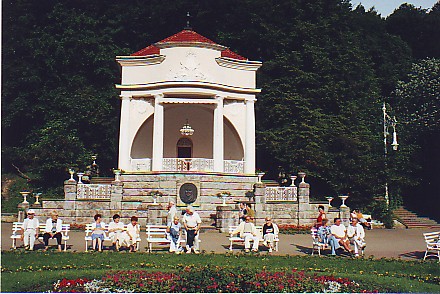 The Adam Mickiewicz Monument from 1906 in the Kurparken. 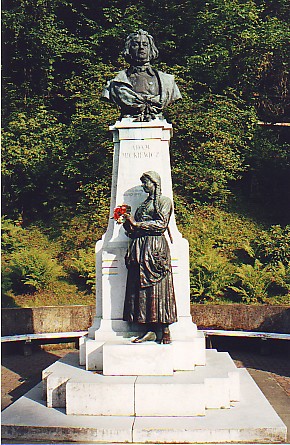 The monument to the national poet Adam Mickiewicz. The female figure represents Zosia from the main work “Pan Tadeusz”

The New Health Center (in the spa park). 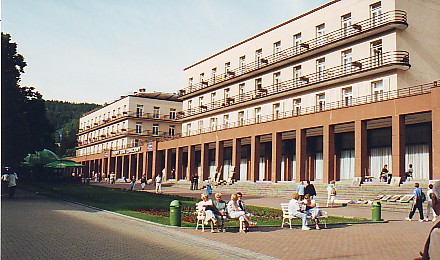 Church of Christ Transformation (Kościół Przemienienia Pańskiego) (near the Kurparken) is the first church built in connection with the health resort, namely in 1862. The floor plan is a Greek cross. The church is covered with wood shingles. 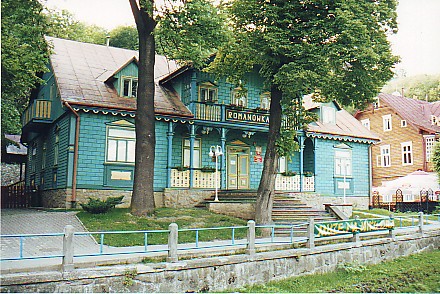 Villa “Romanówka” with the Nikifor Museum

Parkowa Mountain .
Close to the pedestrian street in Krynica is the lower station of the mountain railway which takes tourists up to Góra Parkowa. Each trolley can seat 50 people and 500 people can be transported in one hour. The top station is at the top of Parkowa Mountain. The length of the course is 642 m and the height difference is 148 m. From the top of the Parkowa mountain you can walk down to the city by a marked nature trail.
Sanko Strada.
Sankostrada is a sledding track with a length of 950 m. The trip takes in small two-person carriages, takes 1.5 – 2 minutes. People of all ages can attend. The course is set on a hillside with a picturesque landscape all around.
Church of Christ Revelation is built as a Greco-Catholic church in 1865-75 instead of a former wooden building. Along with the bell tower, the church has 12 small towers, one for each apostle. For a period until 1997, the church was taken over by the Roman Catholic congregation. After that, it again became Greek Catholic. From the original Greek-Catholic era, part of iconostasis’one and four side altars of wood preserved.

Jaworzyna Mountain .
You reach the top of Jaworzyna (1114 m) with a gondola. This course is the longest and most modern of this kind in Poland. The train can transport 1400 people per hour. The 6-seater booths move at a speed of 5 meters per second. From the top there are views of the peaks of the nearest Beskidy mountains as well as Pieniny and Tatry. – There are also marked ski routes on the mountainside.

Żegiestów Zdrój (about 20 km southwest of Krynica)
The village of iestegiestów with the spa town of Żegiestów Zdrój is located in the mountains southwest of Krynica – high above the river of the Poprad River; In the spa town, which has a long tradition behind it, there is a large spa house, several sanatoriums and springs whose healing water is especially high in magnesium. 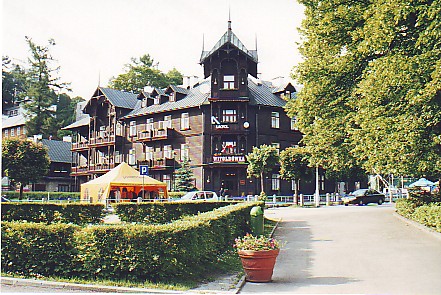 The beautiful building “Witoldówka” at the spa park 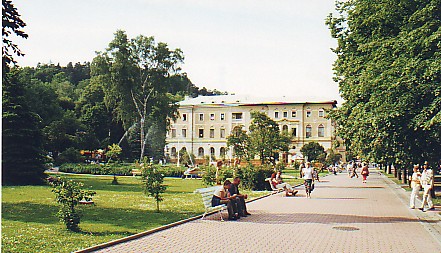 Krynica – in Polish and English
Krynica-Zdrój 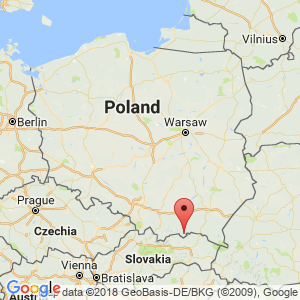