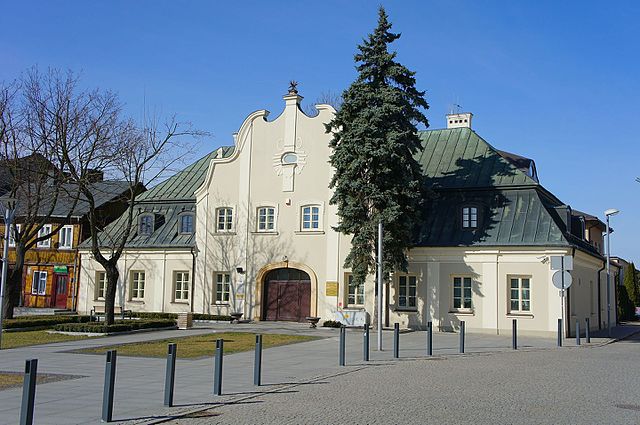 The town of Węgrów is located northeast of Warsaw, in a lowland flowing by the river Liwiec, a left tributary to Bug. Liwiec runs immediately west of the urban area. The small town is the administrative and economic center of the surrounding villages – it is the center town in the district of the same name (from 1999) and purchases agricultural products from the surrounding area. The companies in the city are especially linked to the agriculture and the food industry, as well as building materials, furniture and machine parts. There are also several service and trading companies.

Incidentally, the Liwiec Valley is considered to form a boundary between the two historic regions: Podlasie and Mazowsze, so in that sense Węgrów belongs to Podlasie.

Węgrów is one of the oldest cities in the present Mazowsze county. The first settlement, which was the beginning of the later urban community, probably originated in the second half of the 14th century. In 1414 a parish church was built by the marketplace, and in 1441 the town was granted commercial property rights by Masovian prince Bolesław IV. In 1451, the town was owned by Stanisław of Olomouc, since then it came into other hands, and from 1545 it was owned by Anna Radziwiłł Kiszka, who was a hot supporter of the Reformation. In 1558, she had the parish church set up as a gathering place for the evangelical congregation. From this point onwards through approx. For 200 years, Węgrów was one of the main centers of Protestantism in Poland.
In 1580 the city had approx. 1700 inhabitants. In 1630, the parish church was given back to the Catholics, while a special evangelical church was built in Węgrów. Principal Bogusław Radziwiłł, who had great abilities as an economist, was of particular importance to the city’s development. He gave the city several privileges – among other things. such as gave equal rights to Catholics, Protestants and Jews – and he allowed Scottish dressmakers to settle in the city (from 1637), which became known for the products they manufactured. In 1657, the city was ravaged by Swedish troops, which for a time stopped the city’s development. In 1668 it was decided to found a monastery for the order of the Franciscan Reformers in Węgrów.
After a new war and new devastation caused by the Swedes, a time of religious persecution followed; as a result of this, several Protestant craftsmen emigrated – naturally to the detriment of the city’s business community in general. In 1761, the city was ravaged by a major fire. In the following decades, the town was owned by genera such as Krasiński, Ossoliński and Kolicki. On the night of July 26, 1792, an army of Russian occupying forces entered the city, which was subsequently looted. In 1795, Węgrów came under Austrian administration. In 1815, Węgrów became part of the Polish Kingdom (in personal union with Russia and later an integral part of the Russian Empire). From 1826 the town’s owner was the Lubieński family, who owned the town until 1869.
After the collapse of the November uprising (1830-31), despite the suppression, some economic progress occurred in Węgrów. In 1855, the city suffered badly from a cholera epidemic. During the January uprising, a famous battle near Węgrów was fought on February 3, 1863, when Polish partisans succeeded in liberating the city by defeating the Russian soldiers stationed here. Later, however, the Russians re-invaded the city and hundreds of Polish soldiers were killed. This struggle is described in the literature, in France by Auguste Barbier, in Poland by Cyprian Kamil Norwid and Maria Konopnicka. A commemorative stone in the city also recalls this event. In 1864 the order of the Franciscan reformers was repealed. From 1867 the town was the district center. After 1918 – in the interwar period – Węgrów was an important outlet for goods from the surrounding area as well as a supply center for industrial products for the villages. From 1920 Węgrów was a member of Lublin county.
The years during World War II brought about significant devastation. In September 1939, Węgrów was bombarded by the German Air Force, nearly the entire Jewish population was murdered, as were the destroyed synagogues being demolished. Many residents perished or were brought to Germany on forced labor. The city was liberated by the Polish underground army, Armia Krajowa in August 1944, preventing a planned burning of Węgrów. Immediately afterwards, a branch of the Red Army entered the city.
Węgrów comes under Siedlce county in 1975. In 1987 a new dairy was opened in the city – one of the most modern in Poland. The city’s new cultural center was commissioned in 1988. In 1999, Węgrów gained the status of a district center.

For a smaller town, Węgrów has a significant number of listed buildings, including both Catholic and Protestant church buildings. About the lively trade relations with Gdańsk in their time testify to the Baroque building “Dom Gdański”, the merchants’ former trading station at the square.

Virgin Mary’s Ascension Basilica
is the oldest building in town. The original wooden church is first mentioned in 1414. It is now a Baroque church, formerly though in Gothic style from the beginning of the 16th century. Between 1558 and 1630 the church was Protestant. The first Gothic building was rebuilt after a fire 1703-1711. The construction work was led by Carlo Ceroni, probably according to drawings by Tylman van Gameren. The church has unique frescoes by Michelangelo Palloni. In the sacristy there are so-called “Twardowski’s mirror”.

“Twardowski’s mirror”
is in the Sacristy of the Basilica – above the main entrance. It is a metal mirror in a dark frame, dating from the 2nd half of the 16th century, however the frame from the 17th century. It measures 560×465 mm and weighs 17 kg. The mirror is made of silver, tin and zinc. Around the mirror is a gradually obscure engraving of flowering arabesques. The frame shows an inscription in Latin, which can be translated as: “With this mirror, Twardowski performed magical arts, but it has now been turned to serve God”.

The former complex of Franciscan reformers
consisting of Saint Peter and Saint Antonio’s Church and Monastery are located 500 meters from the square at ul. Kościuszki. The Baroque-style church was designed by Tylman van Gameren. On the main altar an excellent sculpture “The Crucified Christ” by Andreas Schlüter.

The Roman Catholic Cemetery
In the center of the cemetery stands a cemetery chapel – a mausoleum for the Lubieński family – the town’s owners until 1869. The chapel was built in the late 19th century in the Neoromanian style. In the cemetery there are also many preserved burial sites from the 19th century.

Dom Gdański
is located in the northern row of the square. It is a Baroque building with a special wavy gable field (front end) and covered with mansard roofs. The house was built in the middle of the 18th century. The name derives from the merchants from the city of Gdańsk who had their trading station here during the period when Węgrów was a trading center where four-way trade routes met. The building now houses the Public Library of Węgrów. In the basement there are art exhibitions.

College of the Bartholomites
is located near the square, in the southeastern row of houses. The college was built in Baroque style in 1708-12 – funded by the Krasiński family – as the order house for the Order of the Bartholomites who came to the city at that time. In its time, the building housed a seminary and a high school. After World War II, here was the Security Police prison and interrogation rooms. In 2003, the building was partially restored to the Catholic Church.

The Evangelical Cemetery
The cemetery is located northwest of the square, at ul.Ewangelicka. There used to be a Protestant district. In the cemetery is the oldest wooden church in the county, built in 1679 – according to legend during a single night. In the cemetery you can also see the protected tombs of the Scottish immigrants who settled here in the 17th century.

The Evangelical-Augsburg Church
west of the square, at ul.Narutowicza. It is a hall church (ie with one large room) from 1836-41 with tower and porch. The choir contains a wooden altar with an oil painting: Christ in the Olive grove of 1860. The organ in the choir is among the best in this category in Poland.

Memorial to participants in the 1863 uprising
It is a large walking block taken from the nearby village of Szaruty in 1917. The memorial erected by the town’s inhabitants stands on the Siedlce-Węgrów road at the site of the Battle of Węgrów (which took place on 3 February 1863) approx. 2 km from the town square.

Dom Lipki (Lindehuset)
Originally a late Renaissance style house, generally considered to be the building where the town’s printing press (the Aryan printing press) was housed in the 16th century. Now the house holds the municipality’s national register.

The city’s wooden houses
Many single storey houses from the 18th, 19th and early 20th century. Note especially the former Protestant district at ul. Gabriela Narutowicza and the wooden houses by ul.Tadeusza Kościuszki.

The brewery
The former monastery brewery built in 1824.

Liw (6 km southwest of Wegrow)
The Castle of the Masovian Princes.
See the section on this attraction under Warsaw’s neighborhood: Liw Warsaw – page 7.

Stara Wieś (9 km northwest of Wegrow)
In the village there is a beautiful neo-Gothic castle. Construction of the castle was started by Prince Bogusław Radziwiłł, and it was completed in 1661. In 1843, the early Baroque-style building was rebuilt in Gothic-romantic style with a floor plan like the letter T. The inspiration for the interior came from authentic English residences. The castle appears as a typical English castle with octagonal fortress tower and nipple, a stylized medieval defense castle. One can admire not only the original exterior and the beautifully renovated interior, but also the surrounding park with ponds.

Miasto Węgrów: (in Polish and English)

Miasto Węgrów: (in Polish and English) 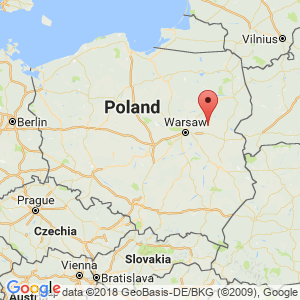