Niepokalanów (48 km west of Warsaw, 13 km east of Sochaczew).
The monastery of Niepokalanów emerged in 1927. The initiator of the founding and its first leader was the monk Maksymilian Kolbe. Alongside the monastic function, the Niepokalanów Monastery developed a publishing business that made the site a significant Catholic publishing center. Kolbe himself was arrested by the Germans in 1941 and placed in the concentration camp in Oświęcim. Here, he volunteered his life to suffer hunger death instead of a fellow prisoner, a family father. In 1982, he was saintly ordained by Pope John Paul II. In the area of the monastery you should see the Virgin Mary Basilica, the old Parciunkula Chapel – the first building on the site, the founding monastery cell from the years 1927-30 and the Fire Protection Museum. 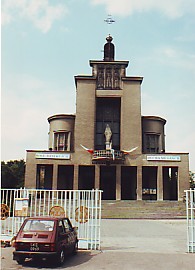 Azelazowa Wola (49 km west of Warsaw, 7.5 northeast of Sochaczew).
The small manor house in azelazowa Wola is Fryderyk Chopin’s birthplace. At the beginning of the 19th century. belonged to the Skarbek family. Of the farm buildings, only the annex (now Dworek Chopina) is preserved, where the Chopin family lived and where Fryderyk was born. Chopin’s father, Mikołaj Chopin, who was of French origin, became a housewife for the children of the countess. – Mikołaj Chopin was born 1771 in Marainville in the province of Lorraine in France; as a boy he was contacted by Polish families: Count Michał Pac and his estate manager Jan Adam Weydlich. As a 16-year-old, he accompanied them on a trip to Poland, where he subsequently settled permanently. He never returned to France and did not maintain contact with the family there. He raised his children as Poles. – In Żelazowa Wola, he got to know his wife, Justyna Krzyżanowska, and married her in 1806. Justyna was the cousin of the Skarbek family and housekeeper on the farm.
Fryderyk Chopin was born in 1810 on March 1 (according to the artist's own and family information) or February 22 (according to the baptismal books, the date stated several weeks after birth). In the fall of 1810 the Chopin family moved to Warsaw, but Fryderyk often visited Żelazowa Wola to spend holidays and celebrate family holidays there. He last traveled to azelazowa Wola in 1830, shortly before traveling abroad.
In 1834, the Skarbek family had to dispose of azelazowa Wola. The property then changed owners several times. By the end of the 19th century. set up a committee whose task was to buy the property and here create a museum to be the property of the entire nation.
In 1894 a memorial for Chopin was erected in Żelazowa Wola. After the annex building was acquired in 1928, a renovation of the building began, giving it the appearance of a typical Polish main building for a smaller mansion. In the same period, a park was constructed, designed by Professor Franciszek Krzywda-Polkowski.
The museum was opened after the war. From 1953, the museum and park belong to the Fryderyk Chopin Company, which is headquartered in the Ostrogski mansion in Warsaw. In the museum, furniture and other objects from that era have been arranged in 6 rooms on both sides of the front room. It is not possible today to determine how the living spaces were in relation to each other in their time.
Every year on the first Sunday in May, the season begins with summer concerts in azelazowa Wola, which last until last Sunday in September. From 1954, artists from all over Poland and abroad participate in the concerts as well as participants and winners of the International Chopin Piano Competitions. Every Saturday in July and August, young pianists in Żelazowa Wola perform in a series of performances called “Estrada Młodych” (The Young Tribune). In addition to public concerts, concerts are held on site, commissioned by travel agencies, organizations or individuals. Such concerts often take place in the evening, where the building is festively lit by candlelight. 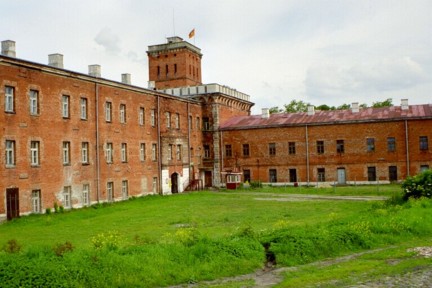 The first fortifications in Modlin were built by the Swedes in 1655 on the northern bank of Bug-Narew’s outlet in Wisła, the so-called “Bugskansen”. In the years 1806-1812 a fortification of the citadel type with bastions was erected here – by order of Napoleon Bonaparte. In the 19th and early 20th centuries. the fortress was expanded by the Russians. In the years 1918-1939 units of the Polish army had garrison in Modlin. On September 29-29, 1939, Modlin was defended by the Polish forces with the participation of the longest-fighting armor train throughout the defense, namely armor of Reserve No. 15, called “Śmierć“ (“Death”) as well as an anti-aircraft gun battery with 4-caliber 40 mm guns, which fired the largest number of aircraft during the fighting in 1939. Modlin capitulated as the last of the defense units in Poland. Today, the neglected buildings and the fortress area, which with its mighty forts and bastions are reminiscent of a dramatic history, are a major tourist attraction.
See also the special page about Fortress Modlin with photos.

Liw (75 km north of Warsaw, 6 km south of Węgrów)
The Castle of the Masovian Princes.
The fortified castle of the Masovian princes, built in the beginning (the 11th century) of wood with earthen walls, was to defend the land “eastwall” against attacks by Jad Swans, Lithuanians and Raisins who regularly invaded this area. At the transition between the 14th and the 15th century. ordered the Masovian prince Janusz I the Elder to modernize the fortress. Before the year 1429, the construction of a walled castle began on an artificial island in the middle of the swamps and the flooded land on the river Liwiec, which at that time formed the boundary of the principality. The castle had a nearly square floor plan, and there was an entrance gate to the west. At the beginning of the 16th century. the castle was rebuilt as the ring wall was raised by several meters and the entrance to the gate was closed from the inside with a wall, creating a kind of gate tower. The wars with Sweden meant the downfall of the castle. In 1657 and 1703, the castle was conquered and looted by the Swedes, and after the second attack it lay in ruins. In 1782, on the foundations of the Gothic building, an official residence was built for the star oasis of Liw, a white baroque-style gentleman's building, using brick from the castle. Unfortunately, this building burned down in the middle of the 19th century.
During World War II, the German leader of the district of Sokołów-Węgrów was planning to tear down the castle ruin and use the stones in the construction of the extermination camp in nearby Treblinka. However, a young archaeologist, Otto Warpechowski, was able to prevent this, by telling the district leader that the castle originated from the Crusaders. Furthermore, his intervention led to the reconstruction of the German funds. This work, interrupted by the Germans in 1944, was resumed in 1956 at the initiative of a group of citizens in Węgrów. In this connection, the castle tower and the mansion were renovated. From 1963, the Clothing House Museum (Muzeum Zbrojownia) exists on the castle of Liw. has a collection of old-fashioned portraits from the 17th to the 18th century, militaria (especially old weapons) from the 15th to the 20th century. as well as punch paintings. At the castle, concerts are also held, both with classical music and popular music.

Konstancin (22 km south of Warsaw)
A building outside Warsaw that emerged during the transition between the 19th and 20th centuries. In the beginning, splendid villas were built in old Polish manor style, other private residences as well as guest houses in the forest in this place that was reputed to have “good air” at the same time as it was near Warsaw. In time, Konstancin gained a climate station and since then status as a health resort. The health resort Konstancin-Zdrój introduced treatment of patients with disorders such as: circulatory disorders, diseases of the movement organs, rheumatism, throat diseases, neurological disorders – as well as dieting. The grading plant, where the beneficiaries benefit from the salt evaporation, was opened in 1978 (Part 1) and 1980 (Part 2) and is a natural inhaler used here for the prophylactic treatment of respiratory disorders. The city of Konstancin (actually Konstancja) originated in a forest belonging to the estate Obory. Castle Obory is not accessible to the public because it serves as a workplace for artists: painters and writers. However, it can be seen from the castle gate. The castle is from the 2nd half of the 17th century, in the Baroque style with a large castle courtyard, where there are several driveways and lawns. The house has a characteristic, double broken roof that is covered with red roof tiles. As an extension there is a castle chapel. The interior is original and stylish; the halls are bright due to the large number of extended windows. The building is due to the Dutch architect, Tylman van Gameren, who spent most of his time in Poland and who has created many buildings in Warsaw and the surrounding area.