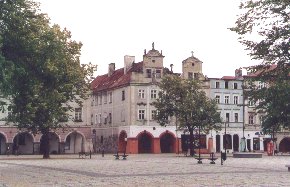 From the square in Kamienna Góra

In the south of Lower Silesia, the town of Kamienna Góra lies in a terrain lowering between the mountains Góry Kamienne and Rudawy Janowickie, on the river Bóbr, at an altitude of 435-460 m.

By the end of the 10th year. this area, which had formerly belonged to the Great Roman Empire (Velka Morava), was incorporated into the Polish state by Mieszko I. In 1249, Bolesław Rogatka, prince of Legnica, allowed the Benedictine Order to create a trading place named Landishute. It is the first historical record of the later Kamienna Góra. In 1286, Bolko I of idwidnica purchased the Benedictine property on the site and introduced Cistercian monks from Henryków in their place. The Cistercians created in the Kamienna Góra area a huge estate that greatly contributed to the development of the area and they maintained it until the secularization in 1810.
The Swidnica principality came in 1392 during the Luxembourg dynasty and later the Czech Republic and Silesia came under the Austrian Habsburg monarchy. The city's development was hampered by the Thirty Years' War (1618-1648); the city was assaulted and plundered to an uncanny extent by various army forces, including Swedish; when an army passed through the city in 1639, it had to be noted that it contained only 2 surviving inhabitants. After the Thirty Years War, Kamienna Góra had to be built from the ground up. Over the next 100 years, when there was a relatively peaceful period, the manufacture and sale of linen canvas flourished. Canvas from Kamienna Góra and its surroundings achieved European fame. Economic development brought considerable prosperity to the city.
Kamienna Góra, Chełmsko Śląskie and Lubawka were built and rebuilt.
After some wars with Austria, in 1740, Silesia was captured by Friedrich II of Prussia. The Kamienna Góra area was greatly destroyed during these wars and the town itself was one of the most destroyed and depopulated in Silesia.
The 19th century. was a time of peace in which dynamic development took place in the area. The textile industry and trade developed; new sawmills, mills, breweries, distilleries, etc. were also tried with coal mining. New roads and railway lines were built. The area became a tourist destination.
Kamienna Góra and its surroundings avoided direct acts of war during World War I and World War II. In the interwar period, tourism grew sharply.
During World War II, the Germans used forced laborers and prisoners of war to work at the companies in the Kamienna Góra district that manufactured products for the Third Reich. In Kamienna Góra, Lubawka, Chełmsko Śląskie and Marciszów, branches of the Gross Rosen concentration camp (Rogoznica) were set up. Kamienna Góra was liberated on 9 May 1945 by wards of the 1st Ukrainian Front 21st Army. Subsequently, a transfer of Poles to the Kamienna Góra area occurred. The new settlers came from the old eastern regions as well as from central Poland. 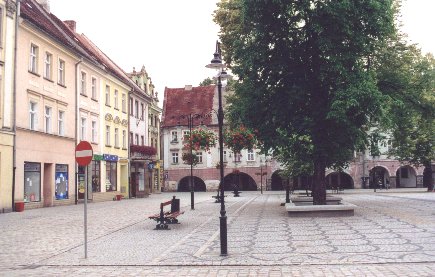 City Hall was erected in the square in the middle of the 14th century. The current building was completed in 1905. The new town hall is built in the neo-Renaissance style. It is an impressive building with a high tower. Interesting is the building's interior with busts of Bolko I and Bolko II (copies from the sarcophagi) as well as the city coat of arms and mosaic panes where events from the city's history have been produced.
Square is built as a square square, on which the town hall stood until 1873, surrounded by baroque-style townhouses from the 17th and 18th centuries. In one of the listed houses on the square is the Museum of Weaving Craft in Lower Silesia with very rich collections. From the square originally 10 streets, today only 6.
Ruins of the castle Grodztwo . This was an impressive Renaissance-style building, erected over a square floor plan, with an inner courtyard surrounded by arcades and a mighty tower in the southwest corner. A moat and a wall with fortified towers defended the castle against attacks. The castle was rebuilt at the end of the 19th century.
Grodztwo (in German: Kreppelhof) burned in 1964. The remains are the remains of the square tower and the inner courtyard with arcades. Visible are numerous Renaissance-style window openings as well as portals and the facade, adorned with pillars. The castle is partly surrounded by an overgrown moat and remains of the park.
St. Peter and St. Paul's Church . The first church at this site was built already before 1295. This medieval shrine was destroyed several times. In the second half of the 19th century. significant changes were made to church equipment. The latest changes to the appearance of the church have come in 1969-72. You will notice the beautiful wooden altar from 1520 and a stone baptismal font with wooden lid from the 17th century.
Church of God Mother (parish church) dates from the early 18th century. At the church was a school of evangelical clergy and from 1729 a book collection began to be built here. The library contained approx. 8000 volumes, including several incunables and manuscripts. At the church there was also a collection of pictures, works of art, etc. that formed the basis for the city museum in Kamienna Góra.
The church floor plan is a Greek cross with arms 14 meters long. There are interesting sculptures, pictures, liturgical tools from the 18th century. as well as side altars and pulpits.
Museum of Weaving Craft in Lower Silesia (Muzeum Tkactwa Dolnośląskiego) is an institution whose mission is to tell the region's history of rich weaving traditions.
Currently, the museum has approx. 13 thousand objects grouped into collections respectively. weaving and art.
In the weaving department, the most numerous collection consists of popular women's hats from Silesia. A large space accommodates the weaving workshops with the various tools. A large part of the collections consists of folk costumes from Silesia, both rural and urban.
In the art department, the numismatic collection is the largest (about 8500 pieces); Most valuable are a number of silver coins from the 15th and 16th centuries, found in 1961. The museum also has a collection of tin utensils, blacksmiths and smallmasters. The ethnographic collection includes Silesian furniture, sculptures and paintings on glass. 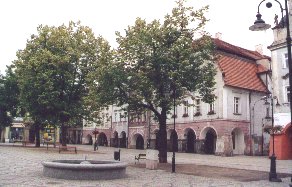 Krzeszów (8 km to the south) is a village with a monastery complex under the Cistercian order, which has been designated as the only one in Lower Silesia for admission to UNESCO’s list of the world's cultural heritage.
In 1242, Princess Anna, widow of Henry II Pobożny (the Pious), called Benedictine monks to the place and in 1292 Henry II’grandson, Bolko I, prince of idwidnica, Cistercian monk from Henryków. The abbess that ensued eventually came to encompass a vast area stretching from Jelenia Góra to Dzierżoniów. The abbey owned 42 villages and 2 towns and gained a special position in the diocese so that the bishop did not have direct power over the monastery. Until 1810, when Prussia dissolved the order, the monastery was an artistic and cultural center where cultural figures of the first rank gathered.
The two listed church buildings, the mausoleum of the Piast genus from idwidnica-Jawor and the monastery, constitute the most outstanding Baroque building complex in Silesia.
The abbey church is one of the most beautiful, late Baroque shrines known.
The church is built in 1728-35; it is 80.5 m long inside and together with the mausoleum it is 118 m outside. The sculptures on the facade make a big impression. The towers are 71 m high with helmets of 21 m. The angel figures standing at the top of the towers are 2.5 m high. From the northern tower, on a platform at a height of 40 m, you can admire a beautiful panorama of the surrounding area. Inside you can admire the frescoes of Jerzy Wilhelm Neunhertz on biblical subjects and the history of the Cistercians. The oak chairs and pulpit are beautifully decorated.
At the main altar there is a small picture of Godmother, in memory of the founders of the abbot, perhaps the oldest image in Poland. It is painted on larch with dimensions 60 × 37.5 and has Byzantine style features. Above this is a large baroque image of Piotr Brandl showing the ascension of the Virgin Mary.
St. Joseph's Church is built in 1690-96. Here is a series of beautiful frescoes by Michael Willmann, which creates scenes of the life of the Holy Family. Willmann was Silesia's most prominent painter of the Baroque era, and was called “the Silesian Rembrandt”.
IN Mausoleum There are 2 beautiful Gothic tombs for Bolko I of Świdnica and Bolko II of idwidnica-Jawor, baroque sculptures by their wives and frescoes by JWNeunhertz.
The area is seen 32 chapels along “the path of suffering” as well Bethlehem (Bethlehem) , the abbot's summer residence.

Lubawka lies 11 km to the south.
Virgin Mary's Church of the Assumption (parish church) is mentioned for the first time in 1292. The present building arose in the 15th century. and was remodeled in 1605-1615 and 1735-1738. The interior of the church has a distinct Baroque character and is very reminiscent of the monastery in Krzeszów and the artists who worked there. Noteworthy are the altar, the baptismal font from 1781 and the pulpit in wood from the 18th century.
City Hall located centrally on the square emerged as a rebuild (by P. Hammersmidt) of an older building on the site in 1726. The building burned with the entire city in 1734 and by the reconstruction it was expanded. The tower was built in 1784. The entrance gate is locked with a large key carrying the city's weapons. The construction style is the classicist.

Marciszów (7 km to the north).
St. Catherine's Church is mentioned for the first time in 1335. The church building is characterized by the Tyrolean building style. The floor plan is square with a separate choir. Inside is the Gothic altar from the 14th century. and the Baroque pulpit from the second half of the 18th century. On the church wall are epitaphs of the von Zedlitz family from 1573-80.

Chełmsko Śląskie (18 km to the south).
Church of the Holy Family (Kościół pod wezwaniem Świętej Rodziny) is one of the most valuable Baroque shrines in Lower Silesia. The church, first mentioned in 1343, was substantially enlarged and rebuilt in 1670-80. The church is a wooden ship with a separate choir and a multi-angled finish. The chapels of the church are decorated by Italian artists. The church tower is at the bottom square, but at the top of the octagon. Inside, you can admire the bedotic bas-relief from ca. 1500, depicting the Virgin Mary's coronation, and a Renaissance pietà, dated 1650. Also worth noting is the ornate wooden altar from the early 18th century.
Weaver houses – collection of weaving houses from the 18th century, called “The 12 Apostles”.

Kamienna Góra – The official site of the district 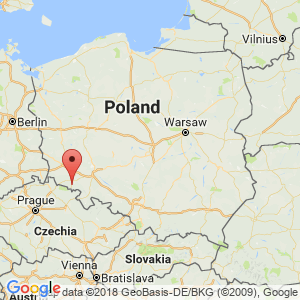