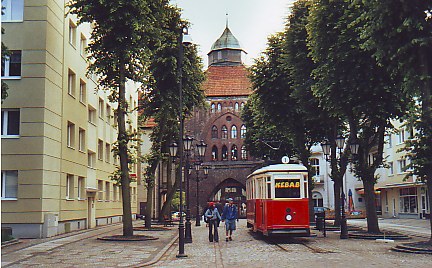 Slupsk. The tram on Nowobramska street. In the background the city gate Nowa Brama (New Port)

Słupsk is located in the Pomeranian County, 18 km from the Baltic Sea coast.
The town is flooded by the river Słupia, which flows into the Baltic Sea at Ustka.

The historical sources mention Słupsk for the first time in 1015. It is believed that the town was granted market town rights in 1265. For a short period in the 1300s, the city belonged to the Order of the Crusader. From the 14th to the 16th century. was Słupsk a member of the Hanseatic League. Through the port of Ustka, Słupsk had contacts with all the countries of the Baltic Sea. The city had the right to coin its own coin, the Słupsk denar. In 1507 the construction of a castle still visible today began. In March 1945, the city was occupied by the Russians, who burned large parts of the old city.

City Hall
from 1901 is in neo-Gothic style. There is access to the town hall tower.

Borgen
Construction started in 1507. Between 1580 and 1587 rebuilt in Renaissance style. The main building now houses the Museum of Central Pomerania.

Borg mill
was originally a 14th century watermill. Later it was used as a warehouse. Today, the building houses exhibitions from the ethnographic section of the Museum of Central Pomerania as well as the Amber Gallery.

Mølleporten
This city gate is part of the old fortification of the city. It was built in the 14th century. in Gothic style.

New Port
The gate building is from the 14th century, in Gothic style. Previously, here were prison, museum and a military workshop. Today, there is an art gallery in the building. Until 1959, trams passed through the doorway.

Witches Tower (Baszta Czarownic)
- part of the medieval fortification of the city. The tower was, in the old days, a prison for women accused of sorcery. Since 1976, the tower houses an art gallery: Galeria Baszta Czarownic.

Bymuren
The city wall at Władysław Jagiełło Street was built in the years 1348-1385. The bricks in the wall are set up in a so-called Vendish switch. The wall becomes narrower upwards; the thickness is up to 1 meter. The highest of the preserved parts of the wall is 6.5 m. The brick towers were located at a distance of 15-30 m.

The tram
On Nowobramska Street, directly in front of the New Port (Nowa Brama), a tram stands as a reminder of former Słupsk. In connection with a street renovation, a space was prepared for the trolley – including rails. Trams were used in city traffic between 1910 and 1959, and it was a very popular means of transport. During the summer season a section of the tourist office is arranged in the carriage.

Maria Church
The church is the wooden ship, in Gothic style; it was built in the second half of the 14th century. Expanded in the year 1500. 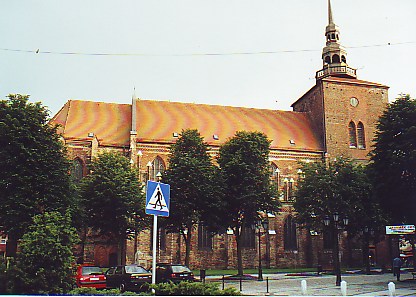 Municipality Library
The library is housed in a former monastery church, St. Nicholas Church. The church was built in the Gothic style in the 14th century, but was severely damaged during World War II; rebuilt in 1963-1971, later remodeled and furnished for library purposes.

Ustka
The town of Ustka is located on the Baltic Sea, on the river Słupia’s outlet, 18 km from Słupsk. It's about. 16,000 inhabitants. It is first and foremost a port city, but also a spa town and seaside resort. The municipalities of Ustka and Słupsk have entered into a formal cooperation agreement during this century; but since the Middle Ages, Ustka was Słupsk’ port city, been close links between the two cities.

Booking.com
Slupsk – with practical information for tourists in Polish, English and German

Slupsk with practical information for tourists in Polish, English and German 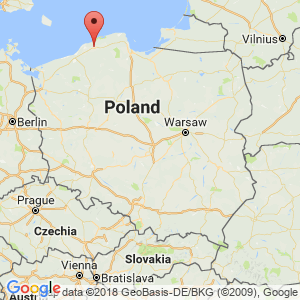