The city of Bytów is a cultural and tourist center in western Kaszubia, ie. in the East Pomeranian county, 88 km southwest of Gdańsk. The town is surrounded by numerous small lakes and beautiful forests (Bytów lake landscape). Originally there was an old Slavic settlement, which from 1329 was owned by the Order of the Crusader. The Order erected a mighty castle on a ridge on the Bytowa River from 1390 to 1405. At the foot of the castle mound, the city of Bytów grew. There has always been a strong element of the Kashubian people group in the city. Despite many years under Prussian and German rule, the city has been steadily fighting against Germanization and for Polish and Kashubian language and culture.
The city was severely destroyed during World War II. Therefore, most of the buildings are relatively new.

The Gothic Crusader Castle : The castle is one of the largest and best preserved crusader fortresses. Three massive, oval fortress towers and a square tower flank the three-winged building, which to the west is enclosed by a high, 3-meter-thick wall. Surrounding the castle are the remains of a moat and earthen ramparts, now planted with old trees. An ethnographic and historical museum is now housed in the oldest northern wing of the castle. In the southern wing, built in the early Renaissance style, there is now a hotel and restaurant.
Remains of the original Church of Saint Catherine . Preserved is the Gothic church tower from the first half of the 14th century.
St. George's Church , Former Evangelical Church, from 1675-85.
A number of townhouses by the square from the end of the 18th century. are examples of the older urban architecture ..

Close to the town is Lake Jeleń, surrounded by forests. The lake has nice clean water and sandy bottom and offers a nice beach and various leisure facilities.

Bytów . The official site of the municipality. In Polish, English, German, Russian
Powiat Bytowski. District side

Bytów . The official site of the municipality. In Polish, English, German, Russian 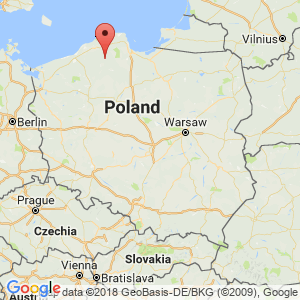