The Royal Route (Traktor Królewski)
The royal route is called a series of streets leading from the Royal Palace to Łazienki.

Krakowskie Przedmieście is one of the most beautiful streets in Warsaw and one of the streets richest in valuable building monuments. The street extends from Castle Square to Nowy Świat Street. 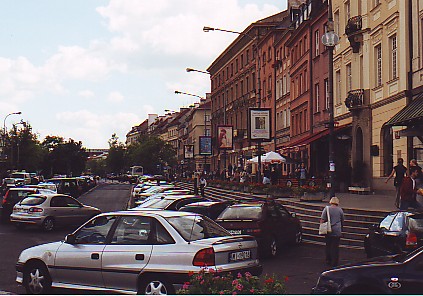 From the time that Warsaw had become the capital, wealthy noble families began to build mansions, churches and residential houses in this street, buildings all created by excellent architects. The buildings in the street have been destroyed several times during wars. During the Warsaw Uprising of 1944, many houses were demolished or burned. After the war, scientific institutes and departments of the state administration got their headquarters in the rebuilt buildings. 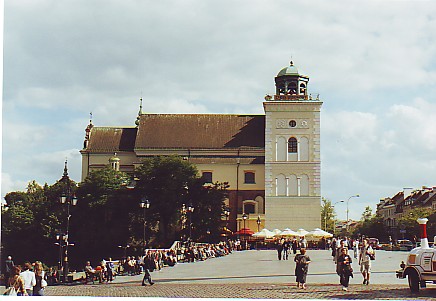 St. Anna's Church (Kościół or Anny)
The church is in Baroque style with a classicist bell tower, originally built in the Gothic style in the middle of the 15th century. The church stands on the slope facing the river, near the Royal Palace. The interior of the church is in late Baroque style with crystal chandeliers and golden altars; walls and vaults are covered with frescoes in blue, green and pink. A series of mirrors with the shape of actual windows throw back the incident light and apparently make the church room larger. Since 1916, the church serves as a university church. 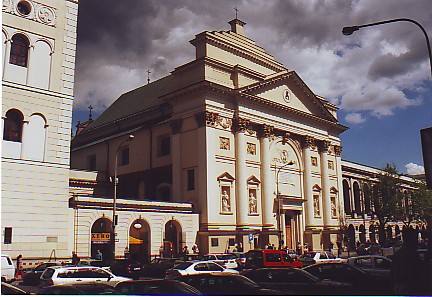 Next to St. Anna's Church are the buildings that house the Central Library of Agriculture and Dom Polonii.
In the nearby small square you will find a sculpture of Godmother from Passau, created by the artist Bellotti in 1683 as a sacrificial gift, ie thanks to the rescue from the plague and honored to King Jan Sobieski in recognition of his victory over the Turks at Vienna.

The statue of Adam Mickiewicz, the most prominent Polish poet of the period, was unveiled in the centenary of his birth, ie in 1898. The success of the statue in a time of increasing Russification (after the January uprising in 1863) was a great success for the committee , which was behind the construction of the artwork. The statue was created by Cyprian Godebski and the foot piece by Józef Pius Dziekoński and Władysław Marconi. 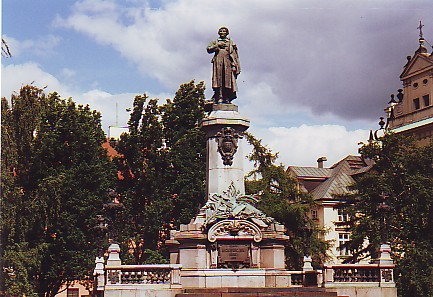 The statue of the poet Adam Mickiewicz

The statue was erected in a square that was then built and surrounded on both sides by the junctions of Krakowskie Przedmieście Street. From the time of the erection of the statue of the Polish national poet comes an anecdote that the Russian authorities gave permission for the project, provided that the statue became smaller than the statue of Tsar Aleksander, which was then in Warsaw; and the statue actually became smaller, but the foot piece was (and still is) much higher than the foot piece under the Tsar's monument. The statue was destroyed during World War II and rebuilt in 1950.

Dziekanka: Stara Dziekanka and Nowa Dziekanka: The oldest building, the so-called Stara Dziekanka, was built in 1770-84 as the residence of the dean of the Warsaw chapter. In 1830 the house was converted into a guest house. After World War II, the building is the center of the capital's student life. The building Nowa Dziekanka next door is a student house for the students at the art schools.

The Barefoot Carmelite Church (Kościół Karmelitów Bosych) was built in the Baroque style in 1761-83. The church's baroque-classicist facade is designed by the architect Efraim Schröger. The main altar is adorned with gilded pillars and angel figures. On the right side altar is the figure of Godmother of the Rosary in a silver dress. It is a gift from Pope Innocent X to King Jan Sobieski as thanks for the victory over the Turks at Vienna. The church was not destroyed during World War II.

On the opposite side of the street stands the yellow Potocki Palace, which now houses the Ministry of Culture and the Arts. The building partially burned down during the Warsaw Uprising and was rebuilt in a classicist style, exactly as it looked before the war.

On the left side of the street, opposite the Potocki Palace, stands the Radziwiłł Palace, also called the Statholder Palace, now the Residence of the Polish President. The entrance is guarded by two stone lions from the 19th century. 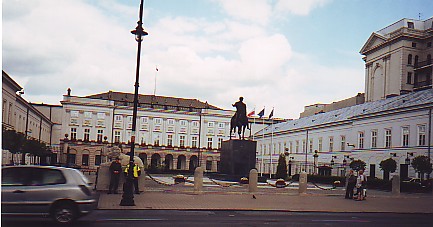 In the courtyard of the palace stands the statue of Prince Józef Poniatowski. The statue was commissioned in 1817 by the Danish sculptor Bertel Thorvaldsen. In 1829 a plaster model was transported to Warsaw and in 1830 the casting began in bronze. This work was completed in August 1832. In 1834, by a special regulation, the Russian tsar forbade the erection of the statue and ordered it sent to the fortress in Modlin. Later, the Tsar handed the statue to a general (Ivan Pashkevich) who placed it on his homel (Gomel)’ in the present. Belarus). Only in 1922 did the statue return to Poland. It was unveiled at Saski Square, but during the last war it was completely destroyed. A new cast, made on the basis of the model, was handed over as a gift from the residents of Copenhagen to the city of Warsaw.

The Visiting Church (Kościół Wizytek) is one of the most beautiful Late Baroque churches in Warsaw. The church as well as its convent buildings were built for the Order of the Blessed Virgin Mary between 1727 and 1734. In the church is a picture from the 18th century by the painter T.Kuntze-Konicz entitled “visit introduction”. On the altar is a tabernacle of ebony from the middle of the 17th century, adorned with images from the life of Christ. The pulpit is in the form of a boat with sails, a golden anchor and the Polish eagle in silver. Above the door are portraits of King Jan Kazimierz and his wife Ludwika Maria, who in 1654 called the aforementioned nun to Poland.
In this church, composer Fryderyk Chopin played on organ.
As one of very few buildings, the church survived the last war without destruction.

The University of Warsaw is housed in several mansions as well as later extensions, erected for use by the University: No. 32 is the classicist Tyszkiewicz mansion from the late 18th century, No. 30 is the Czetwertyński-Uruski mansion and behind the library building stands the Kazimierz mansion. The latter was built in the early 17th century. as the summer residence of King Władysław IV Waza and later his brother, King Jan Kazimierz (hence the name of the mansion). The following kings inherited or acquired the mansion. As a result of a decision in the Polish Sejm, in 1765 the building was given to the Knights School (1765-1795), the first secular school in Poland, founded by King Stanisław August. The teaching at this school was followed by by Tadeusz Kościuszko, general and national hero of Poland and the United States and leader in the struggle for independence. – In the courtyard of the mansion you notice the building of the University Library from the end of the 19th century.
The university was founded in 1818, but closed in 1832 – after the November uprising. From 1862 to 1869 it was the seat of a university named the main school and after its closure, the building served until 1914 as a Russian-language university. From 1915 there was again a Polish university. In September 1939 a hospital was set up here, which was incidentally bombed by the Germans. During the German occupation, the buildings were used by the German army. Ca. 60% of the university buildings themselves were destroyed during the war, while 95% of the book collections and the scientific collections were lost.

The Academy of Fine Arts (Academy of Arts – Akademia Sztuk Pięknych) is located directly opposite the University of the Czapski Mansion. The Baroque-style building dates from the early 18th century. In the courtyard of the mansion stands a copy of a sculpture by Colleoni: the Venetian condottiere.

In the annex of the mansion, Fryderyk has Chopin’s family lived, witnessing a plaque on the building as well “Chopin living room” (museum) in the annex.

The Holy Cross Church (Kościół św.Krzyża) dates from the second half of the 17th century. and is designed by J.Belotti. The facade with the two towers from the beginning of the 18th century. is designed by brothers Józef and Jakub Fontana and JDJauch. The figure of Christ bearing on the cross is due to A.Pruszyński. The church was damaged during the Warsaw defense in September 1939 and partially destroyed during the Warsaw Uprising in 1944. Of the original fixtures, only a few objects and images are preserved. In the pillars of the left church ship are walled urns with Fryderyk Chopin’s and the prominent author W.Reymont’s hearts. 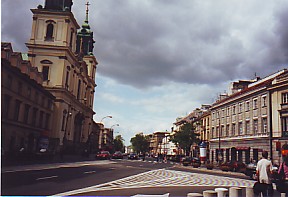 Krakowskie Przedmieście with the Holy Cross Church on the left

The Staszic mansion forms the end of Krakowskie Przedmieście. The classicist building is from 1820-1823 and designed by A. Corazzi. The mansion was built for the Royal Society of Friends of Science with funds from prominent Polish scientist and reformer, Stanisław Staszic’s fund from which the mansion's name derives. The building now houses institutes under the Polish Academy of Sciences. 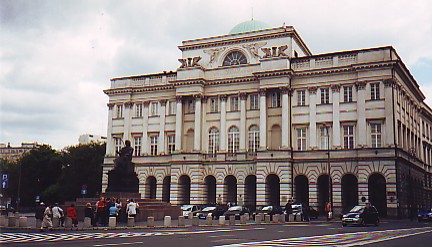 The Staszic mansion with the statue of Copernicus (Mikołaj Kopernik)

In front of the entrance to the Staszic mansion stands the statue of Mikołaj Kopernik (Copernicus) from 1830, created by Bertel Thorvaldsen. During the German occupation in World War II, the Germans covered the statue's Polish inscription with a plate of German writing; this plate was removed during a sabotage by a member of the resistance movement Szare Szeregi. During the war, the Germans removed the statue from Warsaw, but after the war it was found in Silesia, near the city of Nysa. In addition to this statue in Warsaw, there are two more identical statues of Kopernik, cast on the same model, namely Montreal and Chicago. 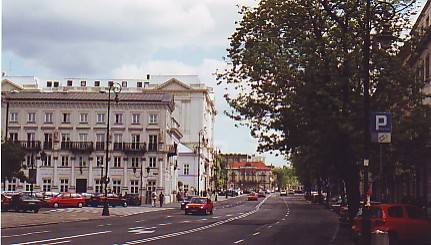 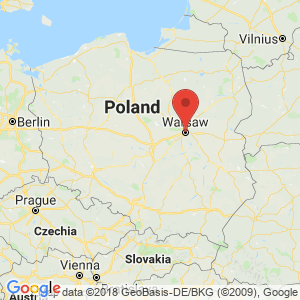