Nowy Świat Street forms an extension of Krakowskie Przedmieście and leads to Plac Trzech Krzyży (Three Crosses Square).
During the last war, the buildings in the street were almost completely destroyed. After the war, some of the original house facades were recreated, while other houses were erected as clean new buildings. The street is now, as it has been since the second half of the 19th century, a street with numerous shops and cafés. A significant reduction in traffic, stylish lighting and floral decor gives the street the character of a pedestrian street. No. 35 is the old, family-owned patisserie “Blikle”, known for its tasty cakes, especially “pączki”. 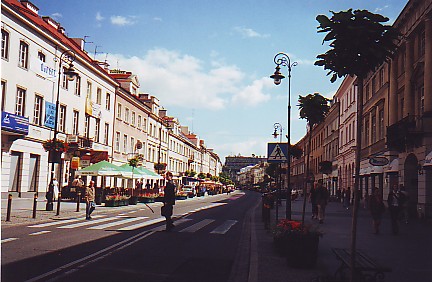 Nowy Świat seen to the south

The Ostrogski mansion, which houses the Chopin Society, is located on Okólnik street 1, which leads from Nowy Świat to Ordynacka street. It is a baroque castle from the late 17th century, designed by Tylman van Gameren. The mansion was rebuilt after the war in 1954 and from 1955 the building has been the seat of the Chopin Society. This company organizes the International Chopin Piano Competitions. Since 1927, the competitions have been held every five years. Since 1999, an International Chopin Festival is also held. The concerts take place during the summer season in some of the most beautiful concert halls in Warsaw: the Ostrogski mansion, the Royal Palace, Łazienki: the Stanisław Theater (Theater Stanisławowski).

Just after the roundabout, where Nowy Świat crosses Aleje Jerozolimskie, on the left is a building that used to be the seat of the top party authorities in Communist Poland, but which now houses a banking and financial center. The building, which has an inner courtyard, was built in the years 1948-51. 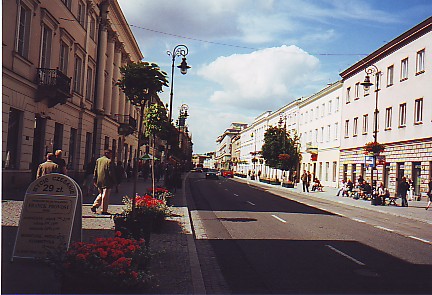 In the middle of the Tri-Square (Plac Trzech Krzyży) stands the Church of Saint Alexander, built in 1818-1825. The architect of the building was P.Ch.Aigner and the model is Panteon in Rome. The church was built under the command of the Russian Tsar Alexander I.

Ujazdów Allé (Aleje Ujazdowskie) was established in the 18th century. and from the middle of the 19th century. the aristocracy and wealthy citizenship began to build palaces, villas and other houses here. The buildings were managed by well-known architects such as W.Marconi, J.Pius-Dziekoński, H.Marconi, FM Lanci, L.Marconi, J.Huss and A. Corazzi. During the occupation of World War II, the avenue was part of the German zone, which is why all Poles were moved from here. Today, foreign embassies are housed in most of the street's palaces and villas.

Park Ujazdowski. This park, located between Piękna Street and Trasa Łazienkowska, emerged at the end of the 19th century. In the park is a statue of the famous pianist and politician, Ignacy Paderewski, created by M.Kamieński. 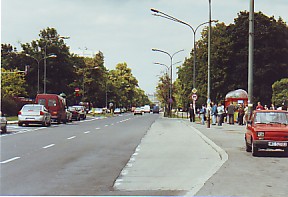 The Ujazdów Castle (Zamek Ujazdowski) is surrounded by trees behind the cafe “Na rozdrożu”. Here, in the Middle Ages, was the fortress of the Masovian princes. King Zygmunt Waza and his son, Władysław IV, erected a stone-walled castle. During the Warsaw Uprising in World War II, the castle burned down completely. The reconstruction lasted for many years. The building now houses the Center for Modern Art.

The Botanical Garden (Ogród Botaniczny) was founded in 1818 by a professor at the University of Warsaw, M.Szubert. In its modest area the garden contains approx. 1000 species and varieties of trees and shrubs and approx. 6000 herbaceous plants.
At the entrance to the garden stands the university's Astronomical Observatory, built 1819-1825.
On the opposite side of the street stands a monumental building from 1900, which is the seat of the Council of Ministers. 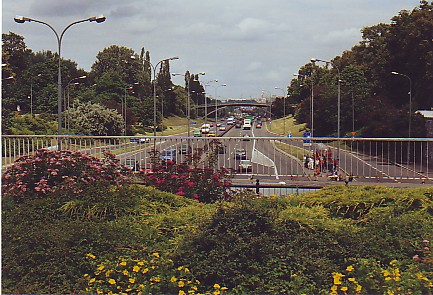 Royal Baths
is a building and park system, founded by King Stanisław August in the years 1766-1795. Since 1918, Łazienki has been the property of the Polish state.
Pałac na Wodzie (Castle on the Water) occupies the central square in the 76-hectare park. The castle, designed by D.Merlini, was formerly a bathhouse, in Polish: “Laznia”, of which the name of the whole complex. 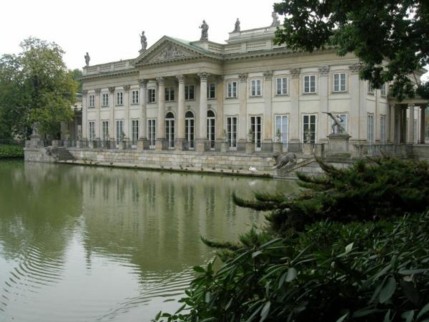 The interior of the castle is in a classicist style, except for the porch, the bathrooms, the Bacchus room and the roundabout that make up the remaining parts of the Baroque bathhouse. The castle displays the preserved works of art, especially those owned by King Stanisław August. During the last war the Germans abducted all the collections from the castle and set fire to it, so that the interior of the building burned. Holes were drilled in the walls to place dynamite, but fortunately the castle was not blown into the air. After the completion of the reconstruction of the castle's interior in 1960, it was made available to the public.

In the park there are “Wodozbiór”, a water reservoir on which a classic roundabout roundabout has been built. – In the Old Orangery (Stara Pomarańczarnia) one of the few European theaters of the 18th century. preserved. – The White House (Biały Dom) is a beautiful Baroque and classicist style building from 1774-76. – Stara Kordegarda was erected on the banks of the northern dam in 1791-92. The facade is decorated with pillars. The building is currently used for exhibitions. – Nowa Kordegarda is located just west of the castle. The building, probably created by D.Merlini, now houses a café. – To the north of the castle stands the statue of King Jan III Sobieski, executed by the royal sculptor, Franciszek Pinck in 1788. – Pałac Myślewicki was erected in three stages from 1775 to mid 1780’s. Here lived a brother-in-law of King Stanisław Poniatowski, Prince Józef Poniatowski, depicted on a equestrian statue of Bertel Thorvaldsen. 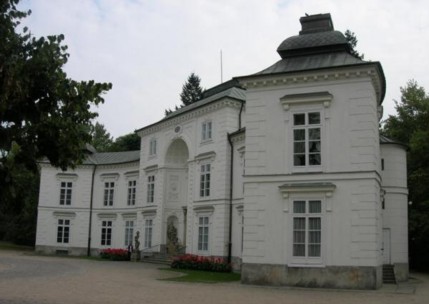 From the southern terrace of the Castle on the Water you can see the Amphitheater, whose scene lies on an island with permanent decorations made of artificial, ancient ruins. 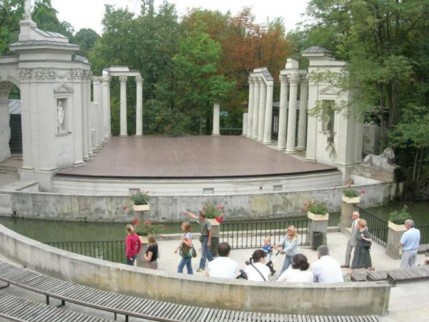 The stage of the amphitheater (Photo: Jakob Hoffmann)

In the southern part of the park you will find the New Orangery (Nowa Pomarańczarnia). 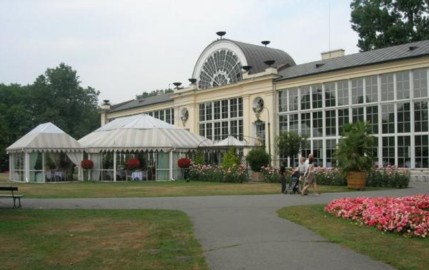 Moving on from here along the avenue you reach the Fryderyk Chopin monument. This work of art by Wacław Szymanowski was unveiled in 1926; it stands on the banks of a water basin and depicts the composer sitting under a (masovian) willow tree, where he seeks inspiration in nature. During the German occupation in World War II, the monument was destroyed. It was reconstructed after the war and returned to its original place in 1958. During the summer season, free Chopin concerts are held every Sunday at the monument. 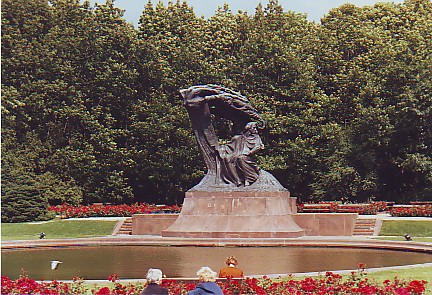 The monument to the composer Fryderyk Chopin

The monument to the author Henryk Sienkiewicz (Nobel Prize 1905) in the Łazienki Park was created by sculptor Gustaw Zemła and unveiled on May 5, 2000. 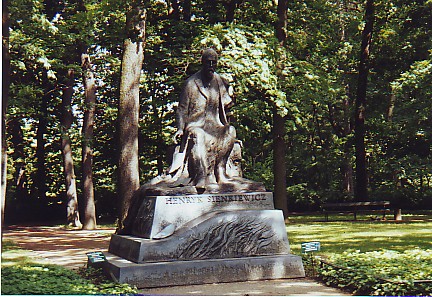 The monument to the author Henryk Sienkiewicz

Belweder. On the way to the aforementioned Chopin monument in the Łazienki Park, one overlooks the Belweder mansion, a classicist-style palace, erected in 1818-22 as a remodel of a former royal porcelain factory. The castle became the residence of the Russian tsar's governor of Poland, the great prince Constantine. Belweder was headquarters for Field Marshal and Head of State Józef Piłsudski 1918-1922 as well as 1926-1935 residence for Piłsudski. 1990-1995 the mansion was the residence of President Lech Wałęsa. It is now the museum of Józef Piłsudski. The main entrance is at Aleje Ujazdowskie. 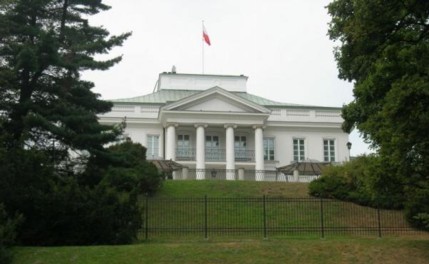 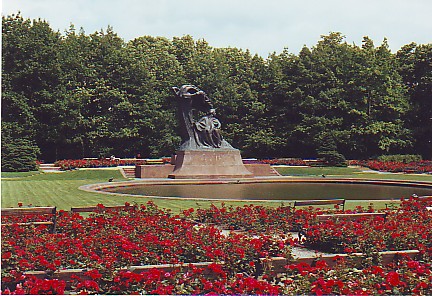 Łazienki Park with the Chopin Monument