Other sights in Warsaw, but outside the city center

The Warsaw Uprising Museum (Muzeum Powstania Warszawskiego) was opened in connection with the 60th anniversary of the outbreak of the popular uprising against German occupiers on 1.8.1944. The museum is located on ul.Grzybowska 79, but with entrance from Przyokopowa street no.28. The building, formerly a power plant for the tram operation, was built in 1904-05.
Protected Cemeteries: Of these there are several, belonging to different faiths and religions: Catholic, Jewish, Evangelical and Muslim.

The Citadel (Cytadela) is a fortress built by the Russian Tsar Nicholas I in the years 1832-34 after the defeat of the November uprising in 1831. Particularly hated by the Poles was the political prison, the so-called 10th Pavilion, where many Polish patriots became executed. The entire area is surrounded by numerous forts and a wall.

The district of Praga:

The Ten-Year Stadium (Stadion Dziesięciolecia) was built in 1955 at a former landfill. The entire facility including tennis courts, ball courts and pavilions covers an area of 49 ha. At the stadium there are a 6 track track, an athletics facility and a soccer field. The spectator seats can accommodate 100,000 people; of which there is seating for 71,000 people. The facility proved to be too large for sporting events and was only used to a minor extent until 1990, when it was spontaneously transformed into a large commercial center or bazaar.
Zoo, The Zoo was founded in 1928. During the last war, by bombing in 1939, the garden was partially destroyed and the animals perished or were abducted to Germany. The zoo now covers an area of 40 ha and holds approx. 3,000 animals.
Church of Mary Magdalene (Cerkiew św. Marii Magdaleny), a Russian Orthodox Church built in 1860’s.
The Florian Church (Kościół św. Floriana) can be seen at a long distance because of the two very high towers; The church was built in neo-Gothic style by the architect Dziekoński at the transition between the 19th and 20th centuries. 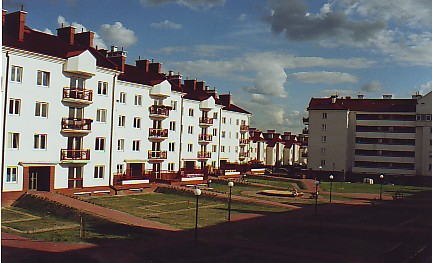 The district of Mokotów:

Pałac Krolikarnia (The Castle “rabbit farm”), after the reconstruction in 1964, was converted into a museum for sculptor and painter Xawery Dunikowski and periodic art exhibitions are organized here. The castle is located in the Arkadia Park on Puławska Street. The castle was built in 1770’the areas in areas where rabbits were previously bred and later hunted for them; hence the name “rabbit farm”. The castle is listed after drawing by D.Merlini in Renaissance style; The model is the Italian Villa la Rotonda in Vincenza.
The horse racing track in Służewiec with stables, other buildings and green spaces was designed by Zygmunt Zyberk-Plater and built in the years 1925 – 1939. The tradition of horse racing in Warsaw dates back to 1841, when the first race track was constructed (now the city center of Nowowiejska) ).

The Royal Palace in Wilanów (Pałac Królewski, Wilanów).
This Baroque-style castle and park is one of the most valuable sights in Poland. In 1677, King Jan III Sobieski bought a property that included an old Polish manor outside Warsaw. The current name of the site and the castle – Wilanów – derives from Italian: Villa Nuova, because the king undertook an extensive remodeling of the old manor. The special value of the building is due to the original architecture – the effect of the connection between European art and ancient Polish building tradition – as well as the preservation of the artistic decoration of the castle's facade and its interior, which with symbolism from the ancient world praises the Sobieski genus and the king's military success.‘is. After King Jan III’His sons sold the castle at the death. During the following centuries, the castle changed owners several times, and these made certain changes in the interior of the castle and in the garden. 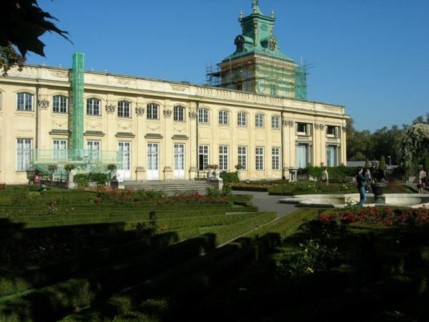 The castle in Wilanów seen from the garden (Photo: Jakob Hoffmann)

After the last war, the castle became state property. After extensive conservation work and after the return of a substantial part of the collections that had been abducted by the Germans, the castle was opened to the public in 1962. The castle's valuable interior represents three style poems. The oldest royal baroque halls can be found in the central part of the building. The rooms have a rich artistic decoration in the form of wall and ceiling paintings, stucco decorations, colorful textiles and ceramic wall tiles and are filled with works of art in painting, sculpture and crafts. The most valuable works of art are a collection of Polish and European painting from the 16th to the 19th century, antique sculptures and Etruscan vases, Meissen pottery, Limoges enamels, goldsmiths from Augsburg, French silver and bronze works from the 19th. century, Saxon, English and French furniture, militaria and Far Eastern art. On the 1st floor of the castle, according to old traditions in Wilanów, a Gallery of Polish portraits from the 16th to the 19th century, with pictures of Polish monarchs, representatives of the great nobles, deserving Polish citizens, participants in important historical events and representatives of the art world. A special place occupies the rich collection of coffin portraits and old-fashioned portraits that occur exclusively in Poland.
The garden covers 43 hectares and contains several styles. To the east, the baroque garden extends into two levels, with a terrace that drops down to the lake and with the stairs as an axis. This part of the park is adorned with statues of ancient gods, decorative flower vases, sculpture groups on the balustrade of the stairs and fountains. To the south and north of the Baroque garden, picturesque English-Chinese-style parks stretch from the late 18th century. and in English style from the early 19th century. In the green areas are sarcophagi, columns and obelisks, as well as smaller park architecture such as the Roman Bridge, the Chinese Promenade and Pumpehuset, which in their design contain allusions to the works of antiquity, the art of the Middle or the Middle Ages.
The three avenues leading into the castle run together at the entrance gate. At the first avenue stands an inn from approx. 1850 (by architect FMLanci). At the second avenue stands an old inn from the 17th century. Opposite this is a neo-Baroque church from 1857-1870, designed by H.Marconi. At the avenues also stands the tomb monument of Aleksandra and Stanisław Potocki, who owned the estate in Wilanów. To the right of the entrance to the castle courtyard was the carriage house and the riding-house; in this place is now the Poster Museum (Muzeum Plakatu).

The bridges over Wisła; Figures mermaid; the most beautiful view in Warsaw:

The largest Polish river (1047 km), Wisła, has its outlet in the Baltic Sea. In the middle race, the river passes through Warsaw. 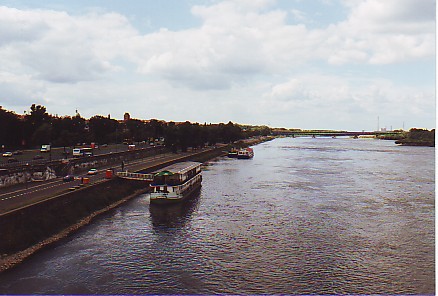 The river Wisła through Warsaw

Today, the right river bank (including the district of Praga) and the left riverbank (Center) are connected by 7 bridges: Most Grota-Roweckiego (formerly Most Torunski) (1981), Most Gdański (1959), Most Śląsko -Dąbrowski (1949), Most Świętokrzyski (2000), Most Poniatowskiego (1946), Most Łazienkowski (1974) and Most Siekierkowski (2002), to which is an eighth bridge: Most Średnicowy, which is exclusively a railway bridge. 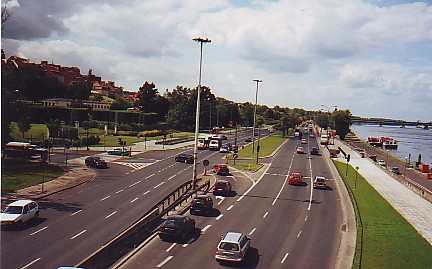 On the left bank of the river (towards Centrum), a wide traffic artery runs; in this section it is called Wybrzeże Gdańskie, and it is seen here from Most Śląsko-Dąbrowski to the north. TV. can be seen the roofs of the Old City. The bridge seen in the distance is Most Gdański

The most beautiful view in Warsaw can be admired as you drive from the right river bank on one of the bridges near the city center. From the Praga side you can see the steep, green riverside over which the roofs of the city rise, and among which the sky-towering towers of the churches highlight together with the royal palace and Stare Miasto and Nowe Miasto. Particularly beautiful is this view at sunset when the sun itself is no longer visible, but its light causes buildings and trees to appear in silhouette against the sky. 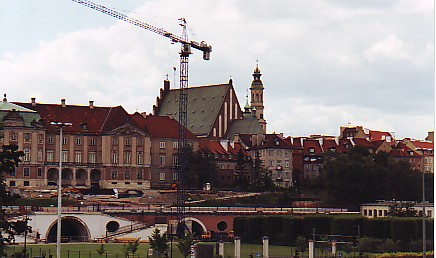 View from Most Śląsko-Dąbrowski (which leads Trasa WZ across the river) towards the Old Town. TV. seen on the east side of the Royal Palace, th. the cathedral and other roofs of the Old City 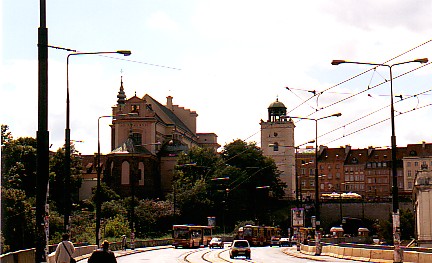 View from Trasa WZ on the left bank towards the center. In the middle of the picture you can see Saint Anna Church (from the east side)

The symbol of the city of Warsaw, as it appears in the city coat of arms, is a mermaid holding in her right hand a raised saber and in her left hand a round shield. The mermaid was part of the city arms already in the second half of the 16th century. The figure, half woman, half fish, stems from the legend of the fishermen who caught her in a stream that ran into Wisła in the place where the old Warsaw city is now, and more precisely where Bugaj Street walks.
Sculptures of the Warsaw Mermaid: In the Old Town Square stands a sculpture of the Mermaid, erected in 1855. At Wisła, near the Świętokrzyski Bridge stands another mermaid sculpture, created by Ludwika Nitschowa and erected in 1939. 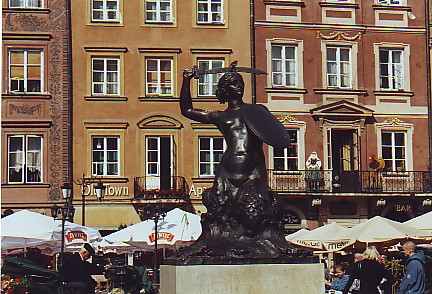 The mermaid statue (“Syrenka”) in the Old Town Square