Góra Kalwaria (22 miles south of Warsaw)
The town plan in Góra Kalwaria represents one of the most original urban foundations in Mazowsze from the Baroque period. The basis of the city plan is the Latin cross. The cross is formed by two axes, namely the streets of Kalwaryjska and Rynek – the axis that runs perpendicular to Wisła – and the streets of Dominikańska and Pijarska, which form the short cross arm. As an analogy to the plan for Jerusalem, the city plan was emphasized by the placement of three monasteries at the ends of the arms (to symbolize the gates of Jerusalem), that is, by the ways of the outpouring. The other elements of the religious complex were also introduced in analogy with the plan for Jerusalem – with the modifications that the local situation necessitated.
Bernadinerklosteret. The monastery complex, erected on the remains of a former church, was built following a project by Jakub Fontana in 1848; it was restored after destruction in 1915. Until 1864, the monastery belonged to the Order of the Bernardin; after 1952 the buildings belong to the order of the Marianas.
The Most Holy Virgin Mary's Immaculate Conception Church (Kościól pw Niepokalanego Poczęcia Najświętszej Marii Panny) is in Baroque style, the interior in Baroque and Rococo style. The pulpit is from the 3rd quarter of the 18th year. (in rococo style) and St. Walerian’s black marble sarcophagus – in Baroque style – is from the end of the 18th century. In the crypt, the founder of the church and the monastery, Fr.Bieliński, is buried. The monastery buildings next to the church are in Baroque style and date from approx. 1755th
Antonius of Padua's Chapel (Kaplica św. Antoniego z Padwy) in Baroque style dates from the second half of the 18th century. and is built on the river slope.
Holy Cross Church (Branch Church) “After Górce” is Baroque-style and erected on an artificial elevation in the 4th quarter of the 17th century, founded by Bishop St. Wierzbowski as the so-called Pilate’ Town hall; The building is one of the central elements of the Kalwaria that occurred at the time.
The Rector's Church (Kościól Rektoralny pw Opatrzności Bożej na Mariankach) was founded in 1674 by Bishop St. Wierzbowski.
The former Piarist College (Kolegium Pijarów) was founded in 1675 by Bishop St.Wierzbowski. In 1819, the buildings were converted into barracks for the Russian army. From 1841 – after a rebuild – it was an old and handicapped room. In 1862 the site was again restored and rebuilt – by project of Henryk Marconi. In the area of the former college is the Neo-Gothic Chapel of Mary and a nursing home.
The Town Hall is from 1829-34 and designed by architect Bonifacy Witkowski with additions by Henryk Marconi (the pillars of the columns). The building was restored in 1919-20. The town hall, destroyed during World War II, was rebuilt in 1950-51.
The former Peace Court (Sąd Pokoju) is a building from the transition between the 18th and 19th centuries, the so-called “bispepalæ”. The building was the seat of the Czersk District Peace Court for a period in the first half of the 19th century. After 1845, it was converted into habitation. From 1958, the building houses the State Archives in Warsaw.
The former Kramboder (Kramy) of 1836 was designed by architect Bonifacy Witkowski. Today, they are used in accordance with the original intention, being designed for shopping and service centers.
The Private Ethnographic Museum. The museum is built on a hill where the Dominican Monastery formerly stood; whether the monastery still witnesses certain brick remains.
See also the independent page on Góra Kalwaria.

Czersk (37 km south of Warsaw, 2 km south of Góra Kalwaria).
According to tradition, the transition between the 11th and 12th years already existed here. a fortified area, a castle that was of significant importance due to the frequent Lithuanian attacks. By the end of the 14th century. Prince Janusz I began erecting a mighty, walled castle whose building was completed in the early part of the following century. The fortification line was built in horseshoe shape and the high walls were defended by three fortress towers, packed with masonry roofs and slates. The castle was clearly a military building. Inside the walls, in the triangular courtyard, there was in his day a residential building as well as a castle church (St. Peter's Church), which probably dates from the 12th century. Until the 15th year. Czersk was the preferred residence of the Masovian princes. The relocation of the princely court to Warsaw at the beginning of the 15th century. was crucial to the fate of the castle. The preserved walls, originally 7-8 meters high, testify about the defense capabilities of the Czersk castle. The foundations were approx. 5-5.5 m tall with a thickness of 180-185 cm. A decisive battle was given to the castle in the 17th century. during the Swedish wars. Part of the Swedish division, which had been dispersed by Czarniecki at the Battle of Warka on 7.4.1656, sought refuge in the castle of Czersk. After three days of residence, the Swedes burned down the city and blew the outer fortifications into the air. 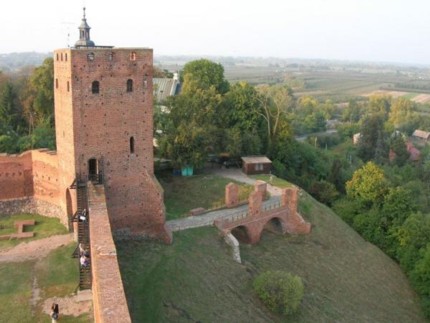 Despite several defeats, the Czersk castle ruin still rises above Wisła’s old riverbed. You enter the castle area via a walled bridge, which was erected while attempting to restore the ruin. Preserved are still significant portions of the wall between the fortress towers as well as three towers. The best preserved and most beautiful of the fortress towers is the square Gothic Gate Tower. Of its Gothic character, the unpainted walls and the ornament with the use of dark bricks testify. In the gate tower were the large entrance gate (for horses) and a smaller gate for pedestrians, both of which could be closed with separate gates. On the first floor was the waiting room. On the second floor there was the most beautiful room in the castle, that which was the residence of the castle's deputy who governed the castle. The following two floors served purely defensive purposes. In the Middle Ages, the tower was covered with a high roof of wood and at the top was a weight corridor. Now the tower room is used for exhibitions. The cylindrical east tower served as a prison. Up to the top of the tower leads a spiral staircase of stones. The entrance to the tower is at the height of the ring wall; From here one threw prisoners through an opening in the floor into the 10 m deep dungeon.
See also the independent page about Czersk.

Nieborów (88 km south of Warsaw, 14 km east of Lowicz).
The Nieborów Museum and the Arkadia Gardens are a 17th-19th century castle interior museum, building on the preserved furniture and equipment of the castle and its collections (sculptures, pictures, graphics, furniture, bronze, porcelain and glass, silver, watches, textiles and book collections), complemented by works of art and crafts from the collections of the National Museum of Warsaw. The castle and the French garden in Nieborów as well as the English garden in Arcadia are available to the public.
The castle in its present form was built at the end of the 17th century. by drawings by architect Tylman van Gameren. The museum was built in 1945. This includes the Radziwiłł Castle and its gardens in Nieborów and Helena Radziwiłł’s Romantic Garden of Arcadia. Until the end of January 1945, the castle in Nieborów and the garden of Arcadia were in private hands, belonging to Prince Janusz Radziwiłł. However, in February 1945, the entire Radziwiłł family was arrested by the NKVD (Soviet secret police) and deported to the Soviet Union. The castle was then nationalized and became a branch of the National Museum in Warsaw. 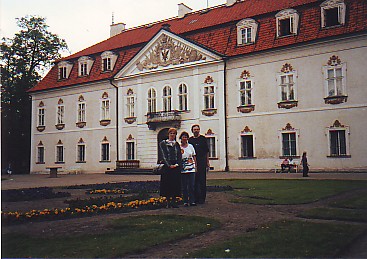 The castle of Nieborów

The park in Nieborów is a French-style baroque garden that was planned in 1760’the Szymon Bogumił Zug. To the west, the garden adjoins a large canal. On the other side of the canal is a landscape park. To the east of the garden are the breeding farm and other strangers belonging to the castle (built in the late 18th century), such as orangery, horse stable, carriage gate and managerial residence. North of the castle is the Hunting Pavilion, which today houses guest rooms; nearer the gate is the Manufaktur building, erected by Szymon Bogumił Zug, which today houses a pottery workshop and museum administration office.
The park in Arkadia near Nieborów was founded by Princess Helena Radziwiłł in the late 18th century. The princess named her romantic garden Arkadia. The garden is kept in English style with garden pavilions richly equipped with works of art, especially ancient art: Greek and Roman. 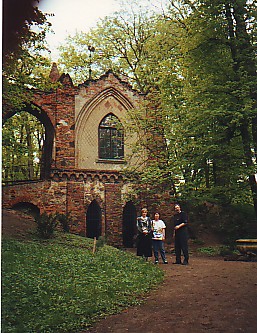 The park in Arkadia