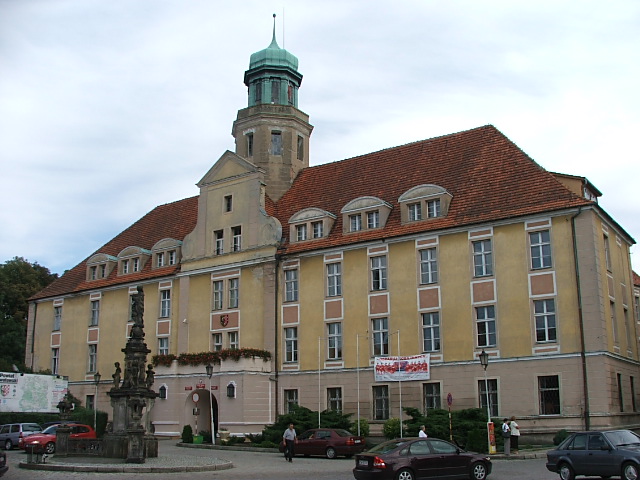 The castle of Wołów in its heavily remodeled form

The town of Wołów is located in the region of Lower Silesia (Dolny Śląsk), northwest of the regional capital Wrocław.

The historical sources mention Wołów for the first time in 1157, when Władysław II Wygnaniec (ie the fugitive) erected a small wooden castle in this place. Around the castle a village arose, the beginning of the later town. At that time Wołów was surrounded by swamps and forests. Through the area, the trade route ran from Wrocław to Głogów. The name of the town is due to the large markets of cattle (woły = oxen) held at the town. In the city's weapons, of course, an ox appears. Probably Wołów was granted market town rights in 1285, issued by Prince Przemek Ścinawski. First it belonged to the Głogów Principality, then to Oleśnica. From 1473, an actual mayor and city council appear as leaders of the city administration. In the early days, agriculture and cattle breeding were the foundation of the city's development. In addition, there were crafts and trade, even later a gunpowder, two brickworks and two water mills. 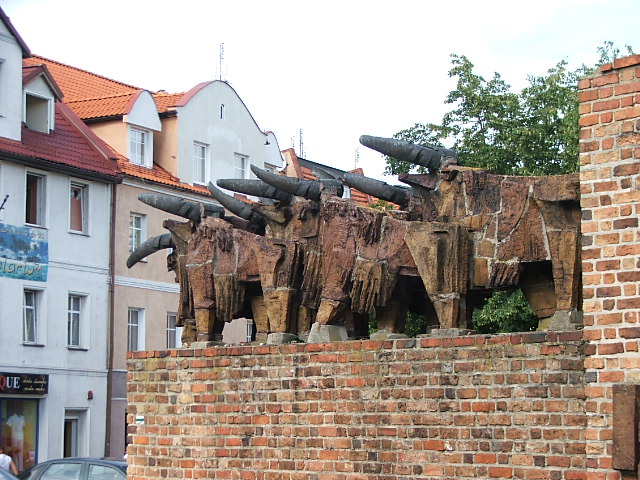 Wołów. Bulls sculpture (from the city's name and weapons)

In the 16th century. there was a strong development of the dressmaking that made the city known in wider circles. The Thirty Years War hit the city hard. During the acts of war, the city changed over several times; many inhabitants perished or fled and large parts of the city were destroyed.
After the last prince of the Piast family died in 1675, the city came under the rule of the Habsburgs. In 1689, the city was hit by a fire that destroyed many houses, including the town hall.
As a result of the three Silesian wars between Austria and Prussia, the city and the entire principality came under the Hohenzolls and thus became subject to the administrative system of the Prussian state.
A new big fire ravaged the city in 1781. However, the reconstruction of the Prussian state, ie. King Friedrich II of Grosse. From a census of 1787 it is known that at that time 1087 people lived in the city. The crafts were organized into 11 guilds, of which the most numerous were butchers, canvas weavers, dressmakers and weavers.
In the 19th century. Wołów was still a small town, but still the center city of a district and center for a certain small industry in wood, construction and food, as well as crafts and trade. Until 1890’The town was home to a military garrison that was quite large in proportion to its size. Later, a sub-officer school and a gendarme school were set up in Wołów.
In 1912 a regional museum emerged and after World War I a library. At the beginning of the 20th century. sewerage and gas supply and electrification were also carried out during the interwar period.
By the end of World War II, Wołów was conquered by the Red Army following a prior evacuation of the majority of the population. In April 1945, the Soviet forces transferred the administration of the city to Polish authorities.

Today, Wołów is both an agricultural and industrial city, with an increasing number of private companies. The city has a modern wastewater treatment plant. From 1998, Wołów is the main city in the administrative district (powiat) of the same name.

At its founding in the 13th century, Wołów was shaped like most other smaller Silesian towns with 2 (here, however, 3) city gates and an equilateral square in the middle of the settlement, while a parish church was erected on the southern outskirts of the settlement. The city's development was largely due to the castle, built in the 1100s. Later, the urban development along with the castle in the southern part of it was surrounded by a city wall. Until the fire in 1689, most of the dwelling houses consisted of wooden buildings with archways. After the fire in 1781, a significant change was made to the building so that it pretty much got the shape we know today. In the 19th century, the suburbs developed east and west and were included as part of the city. In 1913, a water tower was erected east of the old town, which is still architecturally dominant in the city today. 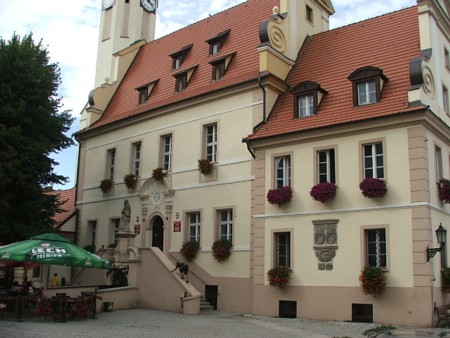 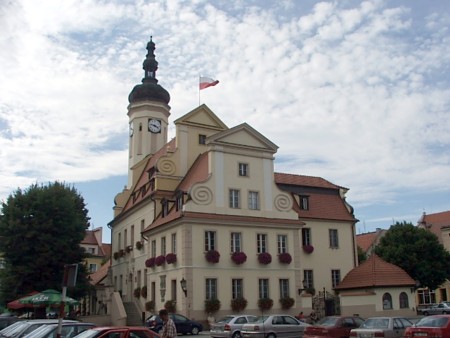 City Hall seen from the southeast

Church of Saint Carlo Borromeo (Kościół pw. .W. Karola Boromeusza)
The church was built by the Order of Carmel in 1712-22 and rebuilt after the fire in 1781.
The monastery building was erected in a long rectangular shape and on two floors. The monks built a collection of many valuable books in the monastery, which at that time was the largest library in Wołów. In 1810 the monastery was partially demolished.
The main facade of the church is in Baroque style, adorned with pilasters. The church is now a Roman Catholic parish church. 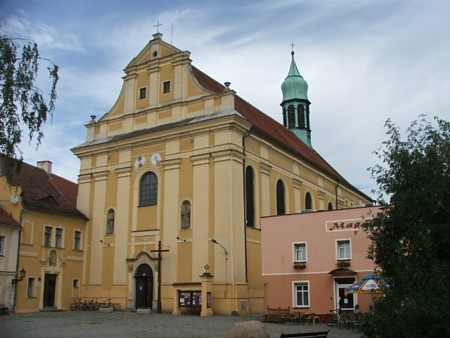 Borgen (Zamek)
The castle was erected at the end of the 13th century. of Henry III of Głogów instead of the formerly built castle. The building was the seat of the castle of Wołów. The castle was rebuilt in 1579, 1655 and 1678 as well as after a fire in the 18th century.
Currently, the building is the seat of district authorities.
See photo at the top of the page.

Saint Laurentii Church (Kościół pw. Św. Wawrzyńca)
The first church building was made of wood, later came a stone building at the end of the 14th century, donated by Henry III of Głogów. After a redevelopment in 1471-83, the church became a Gothic character. Saint Laurentii Church was expanded in 1908, with a porch on the west side. The square tower stands to the north and next to this sacristy. The church organ is a work by Adam Casparini, quite rare and preserved in its original state. 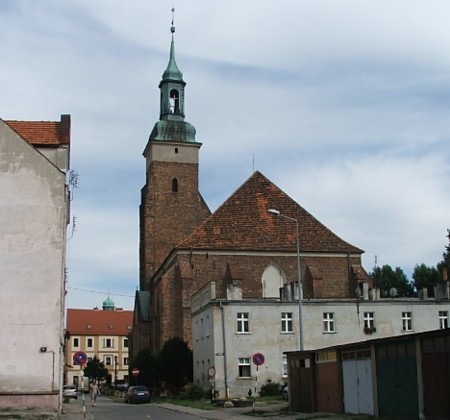 Bymuren (Mury sources)
The city's defensive wall, built in brick, dates from the first half of the 15th century. It was fortified with brick towers and three gates: the Wrocław Gate, the inacinawa Gate and the Borg Gate (Brama Zamkowa). The wall consisted at the bottom of field stones, at the top of bricks; it was 1.3 m wide and 7 m high. Large parts of the wall were destroyed during the Thirty Years War. After 1781, the defense towers and most of the wall were demolished and the moat was filled. However, part of the wall, with a height of 5 meters, is preserved to this day. 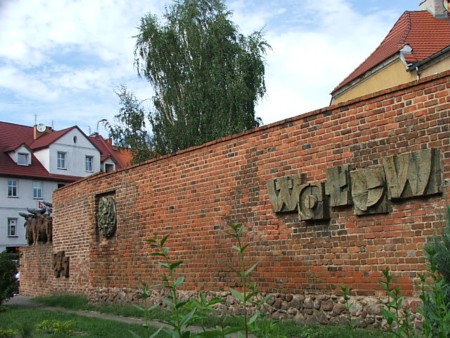 A preserved section of the city wall

Lubiąż
ca. 19 km southwest of Wolow.
The most important tourist attraction in Wołów municipality is the large Cistercian monastery in Lubiąż southwest of Wołów town, on the Odra River.

Konary
ca. 13 km northwest of Wolow.
In the village of Konary are the ruins of the first sugar factory in the world that made beet sugar. The factory was built in 1801-1802 on the initiative of and under the supervision of Franz Karl Achard, a Prussian chemist and physicist. The factory building burned in 1945, but in 1964 the ruins were preserved, and on one of the walls is now a memorial plaque for Achard and his work.
Near the village are the traces of a 12th-century rampage. 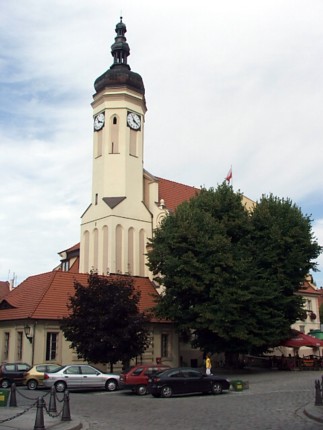 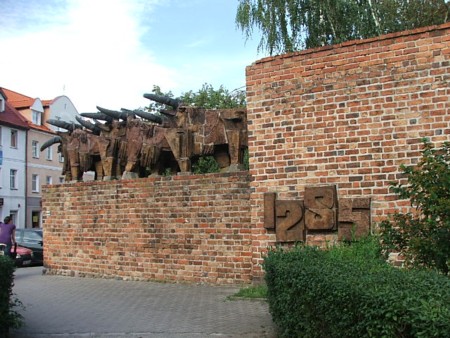 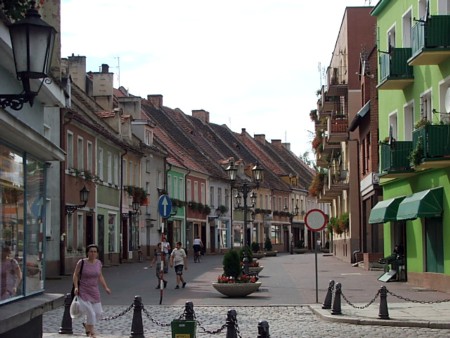 The street ul.Piastów Śląskich in the old town 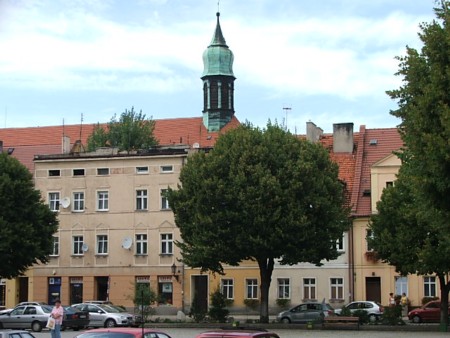 The north side of the square. In the background is the Church of Saint Carlo Borromeo

Wołów. The city name is sculpturally reproduced on the old city wall 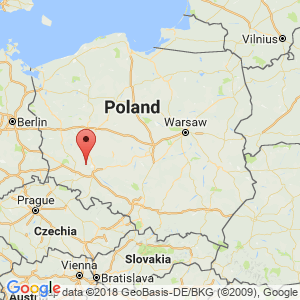