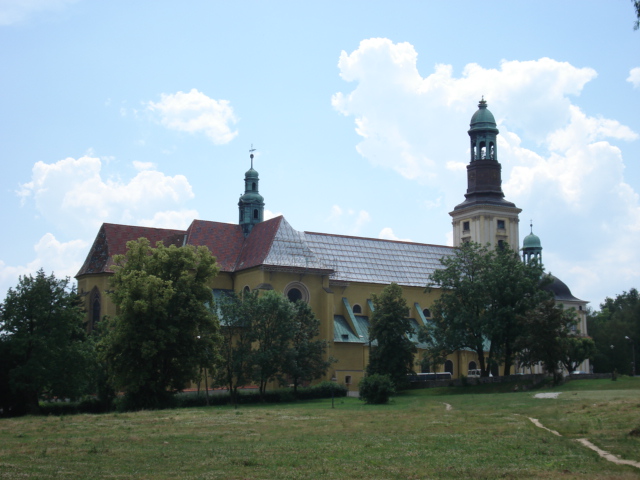 The former Cistercian monastery in Trzebnica with St. Jadwiga’s Basilica

Trzebnica is located approx. 25 km north of the regional capital Wrocław in the Lower Silesian County.
On the hill Winna Góra near Trzebnica, the oldest traces of Poland have been found of early human presence. The archaeologists have determined that here for approx. 500,000 years ago there was a hunter and gatherer culture inhabited by one of human ancestors: Homo erectus. Testimony of this can be seen at the regional museum in Trzebnica.
The medieval sources testify that Trzebnica was a trading place as early as 1138. Prince Henryk Brodaty and his wife Jadwiga’s founding of the monastery and church in 1202 became crucial to the development of the place. A year later, the monastery was left to nuns from the Cistercian order. The Abbey of Trzebnica thus became the first monastery of women in Poland. The town, which was largely developed on the basis of the monastery's location there, gained market town rights in 1250. In the 14th century. heard the town under the Principality of Oleśnica. Trzebnica has suffered several fires and devastations over its history. From the middle of the 16th century to the middle of the 18th century, the Austrian prince Habsburg as kings of Bohemia (Czech Republic) was at the same time dukes of Silesia. This Habsburg time brought Trzebnica some economic prosperity, a progress that was, however, temporarily halted by the 30-year war. Then came the city under Prussia / Germany until 1945. In 1866 a cholera epidemic broke out in Wrocław, during which the wealthiest inhabitants of this city sent their family to safety in Trzebnica, located in a dry and healthy area. After this event, the inhabitants of the big city to the south remembered Trzebnica as a good resort. In 1888 a spa center was established with affiliated boarding houses. In 1945, at the end of the war, Trzebnica was largely depopulated and destroyed.
Today, Trzebnica is a district town and thus the seat of the district government as well as the municipal council, which includes the city and 41 villages. The city also has a court and a district prosecutor. The city is a destination for Catholic pilgrims visiting Saint Jadwiga’s Sanctuary.

In Trzebnica was born in 1703 Maria Leszczyńska, daughter of the Polish king Stanisław Leszczyński and Katarzyna Opalińska; she died in 1768 in Versailles as Queen of France, married to King Louis XV.

Borromeus Sisters Monastery – Former Cistercian Monastery
The former Cistercian monastery is one of the largest monastery buildings in Central Europe. It was built in the years 1696-1726 at the site of a former, substantially smaller building from the beginning of the 13th century. The building is on 2 floors with 2 corner pavilions by the facade wall. The abbey contains a number of interesting sculptures and images; notable are also the beautiful refectories (dining rooms). As of 1870, sisters of the order Kongregacja Miłosierdzia Świętego Karola Boromeusza work here.
(See the image at the top of the page).

Saint Jadwiga’s Basilica (Bazylika or Jadwigi)
The church is the oldest sanctuary in Silesia; it is one of the most important tomb churches of the Silesian Piast genus and is dedicated to the worship of St. Jadwiga. The church is 80 m long and 23 m wide. The main ship consists of four square sections, covered with cross vaults. Of the original Late Romanesque building from the early 13th century. are only preserved parts of the walls and two portals as well as St. Bartolomeus’ crypt, located beneath the presbytery (choir). In the middle of the Presbytery are the tombs of Prince Henryk Brodaty and Grand Master of the Crusader Order, Konrad von Feuchtwangen. On both sides of the Presbytery there are 2 chapels, respectively. Saint Jan’s and St. Jadwiga’s chapel. Midway to see St. Jadwiga’s symbolic tomb, namely in the place where her relics were placed under the building of St. Jadwiga’s chapel. This chapel is the first building or building part of Poland erected in pure Gothic style; building time is 1268-69. The chapel contains the saint's impressive, baroque sarcophagus, made of marble and alabaster. Beneath a canopy, supported by columns, rests the alabaster statue of St. Jadwiga.
(See the image at the top of the page).

St. Peter and Paul's Church (Kościół or Piotra i Pawła)
In the place where St. Peter and Paul's Church stands today originally stood the first parish church in Trzebnica. Its founder was the oldest known owner of Trzebnica, the great man Piotr Włostowic. In 1525, the church was taken over by the evangelical congregation, which it served with interruptions until 1947. When the German people left Trzebnica at the end of World War II, there was no longer a basis for an evangelical church. The building was used as a magazine and generally decayed. It was not until 1987 that the building was handed over to the Roman Catholic congregation; the church's dedication followed in 1998. 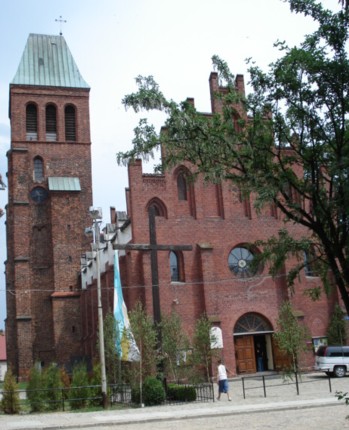 Rotunda Pięciu Stołów
This edifice is an annular wall built in the 13th century. Possibly the place was linked to St. Jadwiga’s charity. This mysterious ring, located just outside the city, was also used to isolate the sick during the great epidemic of the 17th century. Now the rotunda is one of the places to visit when taking part in a walking tour “Saint Jadwiga Trail”.

regional Gallery (Muzeum Regionalne)
The regional museum is housed in an 18th-century house on the square in Trzebnica. The permanent exhibitions include documents and pictures from 1945-47, a photographic exhibition on Trzebnica in the early 20th century, graphics from Trzebnica from the 18th and 19th centuries, copies of documents and stamps from the Middle Ages, including . stamps of Prince Jadwiga, the Silesian princes, the monastery of Trzebnica, the city of Trzebnica’s first stamp and Wroclaw Bishop's stamp; further exhibitions on the 500,000 year old hunter and gatherer culture, populated by the species Homo erectus, found traces of Winna Góra (Kocia Góra), old town maps, the origins of the monastery and basilica and much more.

Saint Jadwiga Museum (Muzeum Culture św.Jadwigi)
The Museum of the Jadwiga cult is housed in a wing of the Pilgrimage House, built in 1978-81 next to the basilica. Every year in late September, thematic exhibitions are organized here. 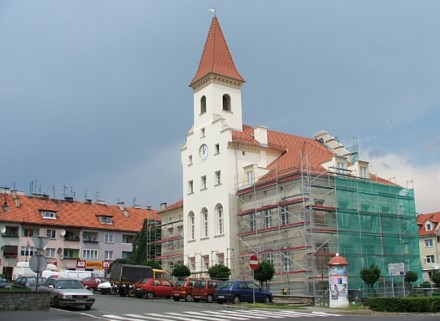 Marcinowo (about 4 km NW for Trzebnica). – In this village there is a small folk museum as well as a folk music group, which is also connected to the people behind the museum:

The Little Folk Museum at Kowalski (Małe Muzeum Ludowe u Kowalskich)
The museum is founded by Marian Kowalski (b. 1938) who has collected (and restored) old agricultural tools, household goods and furniture in the area, as well as watches, folk costumes, oil lamps and much more, for half a century. one of the newest departments in the museum is “The bread house”, whose topic is the history of bread making, but also presents other areas of cooking and household. The museum's owners are Aleksandra and Marian Kowalski, and it is open every day.

folk Group “Marciny” (Kapela Ludowa “Marciny”)
The music and singing group “Marciny” originated in 1978 in the village of Marcinowo near Trzebnica, founded and led by Marian Kowalski. The majority of participants still live in the village. Among the sources of the group's repertoire are folk from the Lublin region, the Kielce region and the Kurpian region. The group, which performs both in Poland and abroad, has received a Polish accolade for its artistic efforts.

Trzebnica (Official site of the city) – in Polish, English and German

The village of Marcinowo is approx. 4 km northwest of the city of Trzebnica, which is again 25 km north of the Lower Schleswig regional capital, Wroclaw. Read our pages LINK:138:Trzebnica and LINK:141:Wrocław . 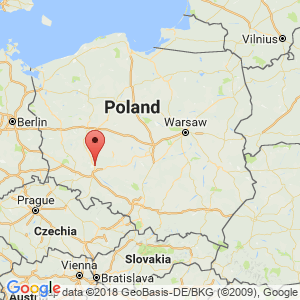