Mother of God of Częstochowa’s Church. Above the church roof is seen the roof of the rear campanile

The town of Lubin is located in the region of Lower Silesia (Dolny Śląsk), in southwestern Poland, northwest of the regional capital of Wrocław. Lubin is the administrative capital of the district (powiat) of the same name. Through Lubin, the important – north-south-pedestrian – runs highway # 3.

In a papal bun from 1155 there are 13 Silesian castles, including Lubin. Prince Bolesław In Wysoki, in 1178, the settlement gave Stary Lubin the rank of town. Prince Henry In Brodaty, around 1205, the new town of Lubin founded between the castle and Stary Lubin. His wife Jadwiga is paying for a wooden church, dedicated to the Virgin Mary. Lubin got his city court approx. 1288 by Prince Przemko of inacinawa – on the basis of Magdeburg city law. A document from 1312 describing the Principality of Głogów mentions “Castrum Lubyn”, i.e. Lubin Castle. In the years 1340-49, Prince Ludwik I expanded the castle; he also surrounds the city with a defensive wall.
In 1526, Ferdinand I von Habsburg took over the Hungarian and Czech crown and thus the supremacy of Silesia. The 30-year war in the 1600s, a plague epidemic and a Swedish attack in 1631 together contributed to the great destruction of Lubin.
The Prussian rule in the area began in 1741 with the capture of Lubin by Prussian forces. In 1843, the first issue of a local newspaper for Lubin was printed.
At the beginning of the 20th century. the city's infrastructure was expanded with water supply and water tower.
At the end of World War II, Lubin was captured in February 1945 by Soviet (Ukrainian) forces. A Polish civil administration took over the rule of the city in May 1945. During the first two years after the war, some German residents voluntarily traveled to Germany; the rest were forcibly displaced.
In 1957, engineer Jan Wyżykowski found deposits of copper ore in the vicinity of Lubin and Polkowice. The discovery of copper ore in the underground was decisive for the city's subsequent development. Already 10 years after this discovery, the area of the city had grown to twelve times, and amounted to 42 km2.
In 1961, Kombinat Górniczo-Hutniczy Miedzi (Copper Mine and Copper Works Combine – KGHM) was founded.
In 1990, the first free municipal elections were held.

Głogów Tower (Baszta Głogowska)
The Głogów Tower was erected as a fortress tower to defend the city gate at this location, that is, a gate tower. It appears as a 6 storey building with a square floor plan. It was built in the middle of the 14th century. along with the city wall. The lower part is of quarry stone, the upper part of brick. The irregularly placed windows are quite small at the bottom and larger at the top. The roof is made of ceramic material and has a fall to four sides. On the north wall you can see traces of the former city wall, which abuts the tower, from which you can see how high the wall has been. In the 17th and 18th centuries. served the tower as a prison, which meant it was not torn down like the other city gates. In the first half of the 20th century. There was a museum in the building. The tower was damaged during World War II battles, but renovated in 1957. After the war, various tourism associations and cultural organizations were housed in the building. 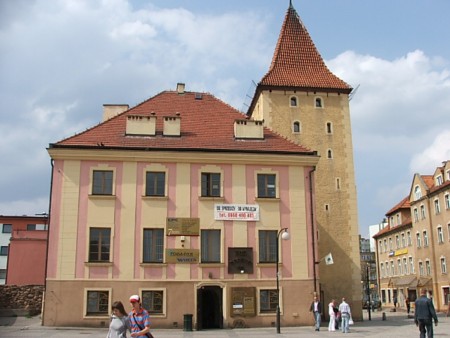 Głogów Tower (right) and a building from the 18th century.

Mother of God of Częstochowa’s Church and Campanile (Kościół Matki Boskiej Częstochowskiej)
This Gothic church is one of the oldest building memorials in Lubin and at the same time the most notable. Previously, the church was dedicated to the Virgin Mary. The first church building at this site occurred in 1203 or 1205. Following the devastation of the Hussites' attacks on the city in 1428 and 1431, there was a strong need to rebuild and rebuild the church. These construction work was first completed around 1511. During the fighting for the city in February 1945, both the church and the campanile were damaged. Between 1947 and 1959 the church was used by newcomers belonging to the Greek-Catholic faith. Only in 1959, when the building was again handed over to the Catholic congregation, was the actual renovation of the building begun. The church building is the wooden ship with elevated side ships; the walls are made up of Gothic bricks in the carpet. Both the main ship and the side ships are three courses long. The long chorus section is in three sections and has a multi-sided, irregular end. An extension to the south contains the downstairs sacristy and on the 1st floor a chapel. To the north side ship is a chapel and a porch. Inside the building, almost all types of vaults are represented. The roof is a wooden structure, covered with ceramic tiles. Door and window openings are pointed arched. Also noted should be the west end of the main ship, where architectural forms from the Gothic and the early Renaissance intervene. Behind the main altar of the choir is an almost 10 meter high and beautifully decorated sacrament cabinet. The pulpit in the late Renaissance style from 1623 is also richly decorated. The bell tower (campanile), which stands next to the church, became the end of the 15th century. built on top of a brick tower in the city wall. It is now a six-storey building with a square floor plan, built in Gothic bricks. On the fourth floor there is a large, pointed arched window in each wall, while every fifth floor wall is decorated with 5 pointed arched apertures. During the 1945 war, the barred construction was damaged. A renovation was begun in 1958.
The church building, see photo at the top of the page. 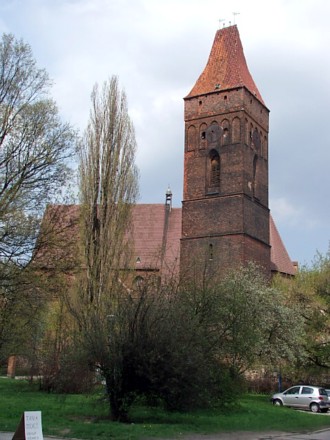 Mother of God of Częstochowa’s Church (rear) and Campanile (front)

Castle chapel (Kaplica Zamkowa)
The chapel was built in 1349 at the same time as the castle's ring wall. It is the only preserved remnant of the medieval castle complex. The building is a single ship with a small, square tower to the west. The wall thickness is 1.2 m. After the destruction in 1641, the chapel was rebuilt in 1663. At that time, a three-sided choir completion to the east as well as a side chapel with altar on the south side. Particularly noteworthy is a tympanone over the pointed arched gothic north portal. The tympanum is adorned with a figure of Christ, St. Jadwiga, Prince Ludwik I and others. The year of construction 1349 appears in a Latin text on the tympanone.

Bymuren (Mury sources)
The defense wall around the city was built in the years 1348-1358 by Prince Ludwik I. The wall of quarry and brick was erected to replace a former, worn-out fortification of earthen walls and wooden palisades. The height of the wall was approx. 4.5 m; the thickness was 2 m at the ground and 1.5 m at the top. The wall was reinforced by 15 fortress towers, both closed and open. Access to the city in the Middle Ages came through three city gates: the Głogów Gate, the inacinawa Gate and the Legnica Gate. The Głogów gate was the best fortified, namely with the gate tower preserved to this day. By the end of the 14th century. passage through the south wall was created through a small gate, which made it easier to get from the cemetery to a cemetery located outside the wall. This new, smaller gate was protected, among other things. of a fortress tower that since – at the end of the 15th century. – was rebuilt and transformed into a tall campanile (bell tower) that still exists. The extended defense system also included the city's defense system. For a while Lubin was one of the best fortified cities in Silesia. Today, approx. 70% of the medieval city wall is still preserved.

Virgin Mary's Birth Church (Kościół Narodzenia Najświętszej Marii Panny)
The place where the church stands is the oldest part of the present Lubin town, namely Stary Lubin (Old Lubin). There is some uncertainty about the church's oldest history in this place. But it is known that before 1270 the church was a parish church for the inhabitants of a number of nearby settlements. 1524 taken over by the Protestants. During the plague epidemics, the dead were mainly buried far from the city center and one of the sites was precisely the cemetery in Stary Lubin. Because of the overwhelming number of plague victims' burials, residents began to avoid this church. The actual ecclesiastical (liturgical) functions ceased and for a long time the building was only used as a cemetery chapel. After Lubin came under Austrian rule, the now rather ruined church was again surrendered to the Catholics. It was considered for many years to demolish it, but it did not happen until 1680, when the Protestants again took over responsibility for the building. In 1683 a new church was built with half-timbered construction, which has survived to this day in almost unchanged form. Destruction caused by World War II was partially repaired around 1960. A further reconstruction of parts of the church took place in the late 1990s.‘s. The church building is erected on an artificial vaulted elevation in the western part of the city. It is erected on the foundations of the former church, with a tower to the west and a three-sided choir exit to the east. To the north and to the south is an enclosed porch with a square floor plan, to the south there is also a sacristy as an extension to the choir. The walls of the tower are a board construction. The roof is covered with thatch.

Castle area (Teren pozamkowy)
The area where the castle stood is to the northeast compared to the rest of the old town. The area was completely independent in its time, separated as it was from the city by a wall through which there was access via a wind bridge. According to documents from the 13th century, the castle of Lubin constituted an irregular square with a square tower. Part of the construction work was done under Prince Bolesław III of Legnica in 1337 and carried on by his son Prince Ludwik I in 1348-58. The castle was severely damaged during the Thirty Years' War (in 1641) and was never returned to its original state. Until 1958 stood a two-storey building that had been destroyed during the 1945 fighting for the city.

City Hall (Ratusz)
The current town hall building in Lubin dates from 1768. It was rebuilt in the 19th-20th century. 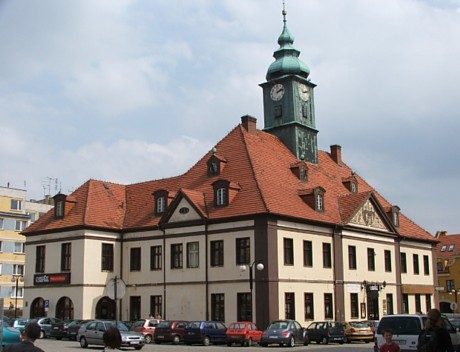 Bodskors (Krzyż pokutny)
On the road to inacinawa, within Lubin's urban area, stands a cross of penance, a testimony of medieval justice: a perpetrator could be sentenced to carve such a cross into stone on his own and place it at the place where his crime had taken place.

climbing Wall
An exciting tourist attraction is the 33.5 m high climbing wall that was established in 1996 on an old water tower. It is the highest climbing wall in Poland.

Near the city there is the 120 ha ha Aeroklub Zagłębia Miedziowego International Airport, which not only serves as a sports airfield and training area, but also covers the copper combination KGHM Polska Miedź SA’s commercial needs. At the aerodrome there is a section for cross-border transport where customs and passport control can take place.

Lubin is located in the middle of the Legnica-Głogów Copper District (LGOM), within which there are three copper mines, three copper plants and other related industries. Lubin is the center of this industrial area in terms of housing, service and trade.

In addition to copper, the Lubin region has other raw materials: lignite, salt, gas and building ceramics, which provides great opportunities for commercial exploitation and development. 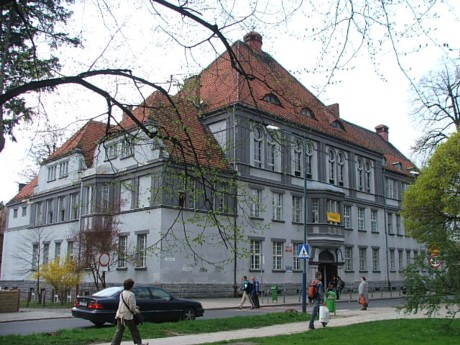 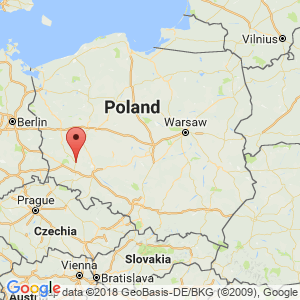