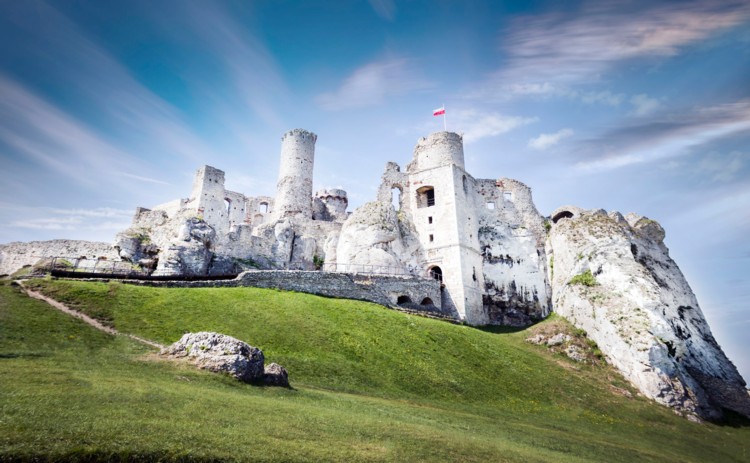 The castle at Ogrodzieniec. – Photo by Studio 7042 from Pexels

Ogrodzieniec is located in the eastern part of the Silesian county, near the border with Małopolska. The municipality is centrally located in the beautiful and striking Jurassic landscape between Kraków and Częstochowa and is also part of the Landscape Park Eagle's Nest (Park Krajobrazowy Orlich Gniazd). The town is known for the nearby, very impressive and picturesque castle ruin.
The first mention of what became Ogrodzieniec can be traced back to about 1100; Incidentally, the earliest written sources mentioning Ogrodzieniec are from 1337 and 1346. Ogrodzieniec’s history is inextricably linked to the history of the castle. In 1409, the city gained market town rights, which it lost in 1870, but recovered in 1973. In the 19th century. the city developed dynamically and was built, among other things. a brickwork, a brewery, a lime mill and a cement factory. 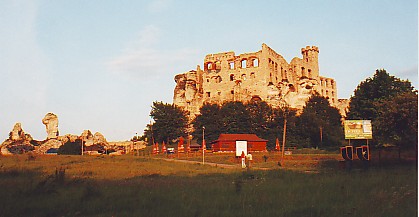 Ogrodzieniec castle:
The castle at Ogrodzieniec is located in the village of Podzamcze approx. 2 km east of Ogrodzieniec. These are the ruins of a castle erected there in the 14th century. and they are the largest and best preserved remains of this type of castle in Poland. The castle is one of the most beautiful examples of the castles and castle ruins one can see “Eagle Nest trail” (Szlak Orlich Gniazd) and is located at the highest point in the entire Jurassic landscape (504 meters above sea level). The castle is also called “little Wawel” – with reference to the castle of Kraków. The castle is built in King Kazimierz the Great’s reign and has had many owners up through time, such as the genera Włodek, Rzeszowski, Granowski, Boner, Firlej, Warszycki, Kozłowski and others. The castle of Ogrodzieniec is built of hard limestone and dolomite stones and has long been an impregnable fortress.
A less fortified settlement existed on the site as early as the 12th year. After this fort was plundered and burned down by the Tatars in 1241, the Włodek family later erected a gothic castle in stone, which remained the family's residence until 1470.
Access to the concourse was from the northeast via a gate building with a smaller moat. The castle served various practical purposes and was also a refuge for the local population in the context of war and other external threats. The entire castle was built on a rock formation and practically merged with the rock. The entrance from the front yard to the central courtyard was defended by a gate tower and a gantry.
In the castle at Ogrodzieniec, young knights of the Middle Ages were trained in the necessary chivalric skills and tournaments took place – a tradition that has been continued to this day.
The Swedish forces' attack in 1655 severely damaged the southern walls. A new Swedish attack in 1702 and a subsequent fire meant the beginning of the fortress's decay. The last owners left the castle in 1810. The ruins were used as building material by local farmers and became increasingly dilapidated. The present state of the castle ruin is a result of the archaeological surveys and conservation work carried out by the Polish state in the years 1959-1973. Although impressive enough, the castle ruin today does not give a complete picture of this great man's residence in its prosperous days.
Today, various outdoor events, tournaments and concerts are placed in the castle or castle area; other celebrations can be arranged on site after booking. 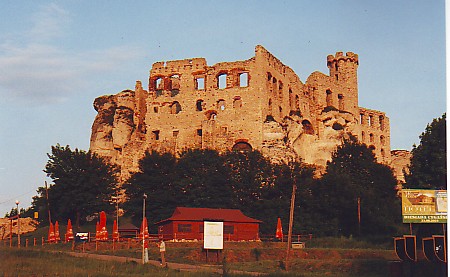 Góra Birów:
This mountain (460 m asl), located in a northerly direction from the castle of Ogrodzieniec, has been uncovered from all five different cultural periods: Younger Stone Age or the Early Bronze Age, Sorbian Culture, Late Roman, Early and Middle Ages. At the top of the mountain, in the Middle Ages was a royal castle older than Ogrodzieniec Castle. Archaeological investigations and reconstruction of the fortified area make the site a major tourist attraction.

Miasto in Gmina Ogrodzieniec (Official site of the municipality) 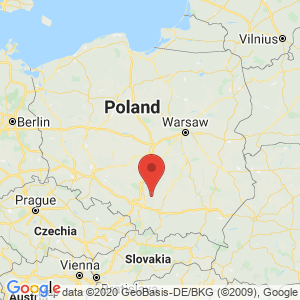