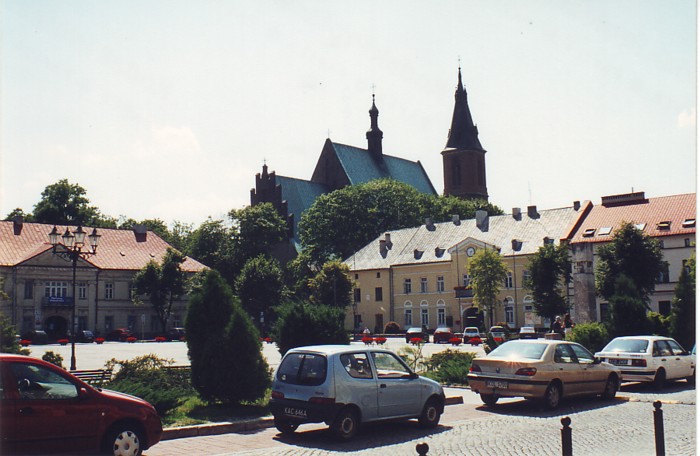 The square in Olkusz with the church of St. Andrew the Apostle in the background

The city of Olkusz is located 38 km northwest of Kraków. Olkusz is thus situated midway between the cultural and administrative capital of Kraków and the large population centers and industrial areas around Katowice.
The landscape that surrounds Olkusz is the highlands named Kraków-Częstochowa Jura; this rocky landscape stretches from Kraków all the way to Wieluń. It is a landscape of valleys, caves and place-wise, amazing rock formations. In the past, the rulers took advantage of the defensive qualities of these cliffs to build castles here to protect the communication paths. The chain of these defenses built on steep limestone cliffs is called the Eagle's Route (Szlak Orlich Gniazd) and leads from Cracow to Częstochowa via Ojców National Park, Pieskowa Skała, Rabsztyn (v.Olkusz), Ogrodzieniec, Klucze, Klucze, Smoleń , Mirów and Ostrężnik et al.
History:
The town's history is closely linked to the extraction of lead and silver in the area, an activity that took place as early as 700-400 BCE The city's name has changed over time: Lcuhs, Hilcus, Ilcus, Ilkusz and finally Olkusz. The town, one of the oldest in Małopolska, was often called “silver city”. In a document of 1184, Olkusz parish is mentioned. In 1226, exports of lead from Olkusz via Siewierz to Silesia are mentioned. The old Olkusz, the original mining town, was at the western boundary of the present city (at the highway no. 94 towards Sławków); here you can still see a well-preserved section of a moat, carved into the rock. Here lay the old fortified mining town. Within the originally inhabited area you will find in a small space the ruins of a medieval church building called the Church of John the Baptist (Kościół Św.Jana Chrzciciela). You do not know exactly why the city was moved to its current location. Possibly it was linked to the invasion of the Tatars in 1241 and the burning of the old city. Documents from the first half of the 14th century. manufactures Olkusz as being under urban and industrial development with as many as 1000 inhabitants. In the middle of the 16th century. the mining was renovated, expanded and streamlined. At this time, the total length of the underground mines exceeded 30 km. In 1814, the mine was opened “Józef”, where zinc was extracted. At the beginning of the 19th century. became Olkusz district town, but also lost at this time certain building monuments, demolishing the city wall, as well as the Augustinian monastery and the town hall in the middle of the square. Important to the city's development was the construction of the railroad in 1883-85, which also boosted the growth of businesses and industry, independent of the mining industry. In 1907, a factory producing cookware was later known as the name “Emalia”; the factory became one of the country's leading manufacturers in this field. After World War I and Poland's recovery of independence, the population of Olkusz doubled over 20 years. A new school, electricity works and sewers were built. After World War II, there was some stagnation that was broken by a revival of zinc and lead extraction, which led to several investments including in residential construction. 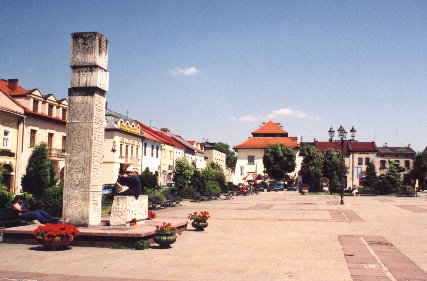 The square to the east

Church of Saint Andrew the Apostle (Kościół św. Andrzeja Apostola) (the city's main church) is a Gothic building dating from the transition between the 13th and 14th centuries. The oldest part of the church is the choir. The church was expanded under Kazimierz the Great. The building was constructed of brick and local red sandstone. 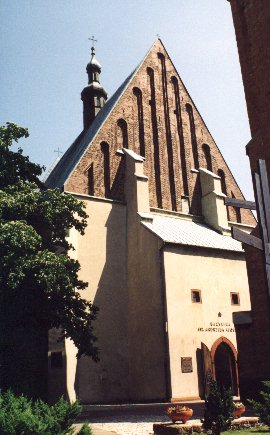 In the 15th year. the St. Anna Chapel was built by the south wall. At the beginning of the 17th century. a porch and Renaissance-style Loreto chapel were built. Under this chapel, in the crypt, the founder, a rich man from Olkusz named Stanisław Amenda, is buried. In the interior of the church you will notice the Renaissance altar from the beginning of the 17th century. with a picture of St. Andrew the Apostle, the patron saint of the church. The church's oldest furniture is a velvet altar from the end of the 15th century.
Some reminiscences in the church of the city's character of the mining town are the baptismal font, performed at the end of the 16th century. of lead from Olkusz, as well as the beautiful, one-and-a-half-meter high silver cross that was donated to the church in the 17th century. by miners from Olkusz. The interior of the church is also marked by tombs for prominent citizens. Near the church stands the neo-Gothic bell tower, erected at the beginning of the 20th century.
The organ: The late Renaissance Hummel organ is one of the most valuable fixtures in the church. Its history goes back to 1611, when a contract was signed to manufacture the instrument with Hans Hummel, an excellent German organ builder living in Kraków. After the death of his son, who perished during the building of the organ, Hummel left Olkusz. His student, Jerzy Nitrowski, completed the organ building. A long-standing conservation work, completed in 1992, restored the organ's old splendor. The instrument has two manuals (keyboards for hands), pedal (keyboard for feet) and 31 voices. Master Hummel's organ in Olkusz represents a special value in that the original mechanism is preserved as well as the vast majority of the 1776 organ pipes. The voices that had been remodeled have been faithfully reconstructed according to preserved models. To achieve the original organ sound, the instrument has been tuned, as was done in the middle of the 17th century. Therefore, the Olkusz organ can mainly perform Renaissance music and early Baroque music. For several years, the church in Olkusz has now been returning “Organ Music Days”.

The city walls: A picturesque corner of the old city is made up of the reconstructed fortress tower along with a remnant of the old city wall. Originally, the wall was 1100 feet long and 9 feet high; it was equipped with 14 towers.

Machnicki Mansion from the 18th century. This beautiful mansion is located at ul.Szpitalna and today houses the Office of Artistic Exhibitions.

Władysław Wołkowski Museum . Here you can see the largest collection of works by this artist and creator of applied arts whose passion was wicker. Over 120 works can be found in the museum. Here is the use of art such as chairs, stools, tables and artistic works such as portraits, landscapes and representations of historical events.

African Museum in Olkusz , named after Bogdan Szczygieł, is one of the most interesting among the museums in Poland dealing with arts and culture on the African continent. The museum came about thanks to gifts from Bogdan Szczygieł, the founder and otherwise doctor (in Olkusz) and author, a man who spent several years of his life in Africa. In the museum you can see daily tools, suits, ritual masks, musical instruments, jewelery and weapons from different regions of Africa.

Olkusz Area Museum of Fire contains tools and articles regarding fire department, cars, horse drawn syringes, helmets, axes and firefighter uniforms. There are a total of 20 tabs (the oldest is from 1885). There are exhibitions of medals and awards as well as old coins. In a special hall are collected memories in connection with Poland's freedom struggle. Here you will see uniforms, weapons, pictures. Other collections also go beyond the topic of fire service and include technical topics such as old radios, telephones, watches and irons. 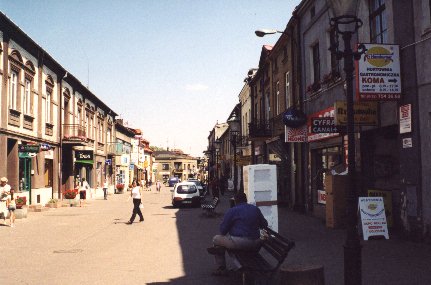 The pedestrian section of ul.Kazimierza Wielkiego, from the square to the east

Rabsztyn : Just outside the city in a northeastern direction, the ruins of this castle lie on top of a smaller limestone cliff. Previously, there was a border post at the border between Poland and Silesia, but in the middle of the 14th century. they built a regular castle on the site. At the beginning of the 17th century. the castle was expanded by the then starosta (district head). East of the original castle, which had been enriched with Renaissance-style architectural details, he erected a two-story late-Renaissance castle called the Lower Castle; the castle consisted of three wings. The castle had 40 rooms at that time.
In 1657, the castle was burnt down by Swedish troops. After 1657, the castle was rebuilt, but only rarely used, as the Star oost built a farm at the foot of the castle. The castle was completely abandoned in the early 19th century. The Gothic upper castle was a ruin as early as 1765.

Błędów Desert (Pustynia Błędowska) begins approx. 10 km northwest of Olkusz, between Bledow and Klucze. It is the largest area in Poland with fly sand and at the same time the only natural desert in Europe, created from quaternary sand of fluvioglacial origin and as high as 315 meters. The area is 32 km2 (length 8-9 km, width 3-4 km ). The volume is estimated at 2.5 billion m3. From the desert area, a sandy road has been constructed, whereby part of the area has been destroyed, with the purpose of obtaining sand from it for refilling in the nearby coal mines. The distinctive features of the desert are the sand dunes and the steppe vegetation: mare's straw (Leymus arenarius), mercury (Triticum repens) and others. and fulgurites, i.e. mineral lumps or tubes of fused sand grains that have resulted from lightning strikes in the sand. Also to be noted is the gallery forest along the river Biała. In the past, the phenomenon of fatam organa also occurred. The rise of the desert must be seen in connection with the ice age in this area. The melting water deposited the sand due to clay and limestone.
Today, the Błędów Desert looks something different. In several places the pine forests grow, and in 1960’the dunes were planted with an Australian arrow in several places to hamper the sand escape that threatened to bury the land and property of the neighboring villages. These plants as well as the mare straw met the expectations, but at the same time led to a general increase in plant growth. The area's current appearance is also characterized by the pine forest and birch trees planted in the western part. However, around Klucze in the eastern part you can still see larger areas, exclusively covered with sand. The oasis around the river Biała Przemsza divides the desert into two parts: the northern (smaller) and the southern (larger). Southwest of Błędów are marked two didactic nature trails that lead through the river valleys Biała Przemsza and Biała. North-west of Klucze, a path through the desert is marked.

Ojców National Park is located approximately 16 km southeast of Olkusz in the direction of Kraków. 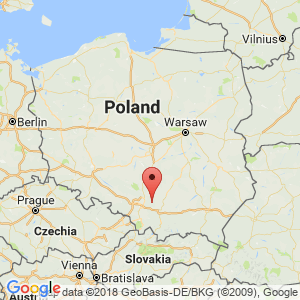