Bed & Breakfast in southern Poland by the town of Maków Podhalański 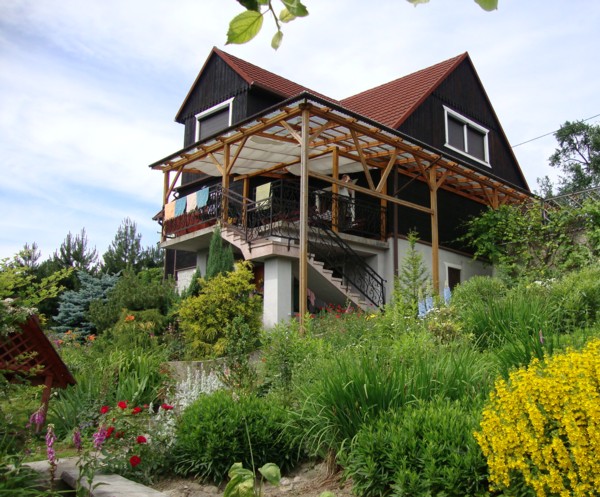 The house seen from the southeast, from the garden

Location:
The house is located in a mountain village near the station town of Maków Podhalański, approx. 65 km. southwest of Kraków in southern Poland. Maków and its surroundings have a healthy climate with clean and fresh air.
The house is built on a steep south-facing slope near the mountain peak (697 m.). From the house there is a very beautiful view along the wooded hillside beyond the Skawa River valley towards the more distant ridges and valleys (Beskidy Mountains), which reach the highest point – along the Slovak border – at the highest point of the Babia Góra massif (1725 m.)

Description:
The house is originally the farmhouse of a abandoned manor site with a land of 2.5 ha. The buildings, the garden and some of the nearest field are fenced.
There are 3 guest rooms in the attic, 1 large (29 sqm) with 4 beds and 2 smaller ones (each well over 15 sqm) with 2 beds in each. The great room has windows to the east and the others to the west. In the attic there is a hall in addition to the rooms, to the north there is a guest bathroom and to the south a living area with a large window overlooking the mountains.

Total beds for guests: 8.
The house is a log house with outer wooden cladding, built on a concrete foundation (= basement); It was built just after World War II, but in 1997-2000 basically renovated and remodeled. The original farmhouse now has the character of the villa.
The flooring is in the basement as well as in the hall and bathroom on the ground floor clinking on concrete substrates; in the rest of the house there are hardwood floors; there are wooden ceilings everywhere; in the attic everything is wood.
The house contains a total of 240 sqm, spread over a fully utilized basement, ground floor and attic floor (staircase and terrace not included in the 240 sqm). On the slope to the south, a large terrace has been added to the ground floor. A few meters from the house – on the other side of the parking lot – stands a smaller charging building, which is utilized as a garage and as a fuel store. There is access to the open terrace from the hall on the ground floor and from the door to the basement below the terrace.

Telephone: No telephone lines have been routed to this part of the Makowska Góra settlement, and therefore there is no fixed telephone in the house. Mobile phone can be used. 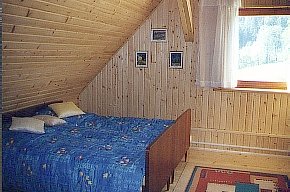 One of the small rooms on the attic 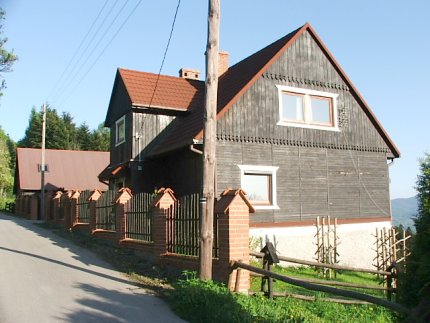 The house and barn seen from the west.

Facilities in short form:
Floor area: 240 sqm + stairs + outside terrace. -Bedrooms: 3. – Sleeps: 8.
Maximum number of concurrent guests is currently: 8.
Bathrooms with shower and WC: 1.
Open terrace to the south. Covered terrace facing south. Parking and turning area (3-4 cars). The gate to the parking lot can – and should – be closed at night. An enclosed garage in a barn building is occupied by the host couple’s car.

1) from the Danish-German border at Frøslev via Neumünster and Bad Segeberg to the A24 motorway towards Berlin, at the Berlin Ring south of Berlin (A10), ie via Potsdam and then the A13 in the direction of Dresden; later follow the A15 motorway towards Cottbus and the Polish border; southeast of Forst, at Olszyna, the border with Poland is crossed. In Poland, continue on the A18 motorway in the direction of Wrocław. The road passes south of Żary (possibly overnight in Żary ). The A18 continues as the highway (motorway) A4 in the direction of Wrocław and on towards Katowice and Kraków. By far the largest part of the road is excellent motorway, passing Legnica, Wrocław, Opole, through the Katowice area and Katowice city and on towards Kraków. The stretch between Katowice and Kraków is a toll road. After Katowice and after passing the payment facility, take the motorway at Chrzanów (road no. 79); in Chrzanów, turn left onto road No. 781 towards Zator; drive through the village of Płaza (right turn) and Babice (left turn and right turn); in Zator, drive across the square and continue on road 28 towards Wadowice and Maków; in Wadowice, take a ring road east of the center and continue in the direction of Nowy Sącz, still with road no.28, which continues through Maków Podhalański. Distance from the Danish-German border: 1094 km.

1a) Alternatively you can at the Berlin Ring drive north around the city and continue east towards Frankfurt / Oder respectively. the Polish border and Poznań with the A12 motorway. The border is crossed at Świecko and continues along the A2 / E30 motorway in the direction of Poznań. At Jordanowo, turn south with the S3 / E65 towards Zielona Góra and Legnica. Here take the A4 motorway towards Wrocław; one passes Wrocław and Opole, through Katowice and on towards Kraków. (The rest of the route: see above under 1). Distance from the Danish-German border: 1103 km.

2) ferry from Gedser to Rostock; from Rostock via the Berlin Ring and the A13 motorway in the direction of Dresden; later follow the A15 motorway towards Cottbus and the Polish border. (The rest of the route: see above under: 1). Distance from Rostock 865 km.

3) ferry from Ystad to Świnoujście; from Świnoujście with highway S3 / E65 via Szczecin, Gorzów Wielkopolski, Zielona Góra to Legnica. Then take the A4 motorway towards Wrocław; one passes Wrocław and Opole, through Katowice and on towards Kraków. (The rest of the route: see above under 1). Distance from Świnoujście: 755 km.
The aforementioned distances must be added 3 km from the center of Maków to the house.

Parking:
You can park cars on “courtyard” (between the house and the barn) that is planned, tiled, fenced and furnished for parking and turning space.

The town of Maków Podhalański:
Maków is a city of 5,750 inhabitants (15,750 in the municipality). Highway 28 (from Zator via Wadowice and Nowy Sącz to Przemyśl and the Ukrainian border) runs through the city. Through the valley, the river Skawa, a few meters south of and along the elongated urban settlement in Maków, runs. Between the river and the road (ie the main street of the city), the railway runs by train to Katowice, Kraków, Zakopane and Nowy Sącz. In addition to the train connection, there is a bus service to the surrounding towns. The nearest airports are at Krakow and Katowice.
The town’s history dates back to 1378, from 1581 there was a more urban development and in 1840 Maków was granted market town rights. In addition to trade, several crafts are represented in Maków – especially in the wood and construction industries. The city is known for making crafts, especially embroidered fabrics. – The existing Late Classicist church dates from 1826.

Most shops can be found in and near the square or within walking distance. You can park in the square. At or near the square there are several food stores, bakers, butchers, hardware stores, newspaper kiosk, exchange shop (Kantor wymiany), shop with electrical articles, film and video shop, shop with women’s clothing, 2 book and paper shops, men’s clothing shop etc., a cozy a bar / cafe, where hot dishes can be served as well as a restaurant / pizzeria with outdoor dining. In the square (No. 9) is a large café. In the square is also the post office. In Maków there are several pharmacies, a medical center / ambulatory, a small hospital – and several auto repair shops. In recent years, shopping opportunities have expanded significantly; there are now no less than 6 supermarkets in the small town; Of these, the 5 are brand new and modern. Of these 5, the two are on the street leading from the main street to the railway station (ul.Kolejowa), while the last three are located on the main street in the direction of Sucha.
There is also an ATM on the main street: approx. 100 m from the square to the east on the right-hand side; here you can withdraw złoty using your VISA card. 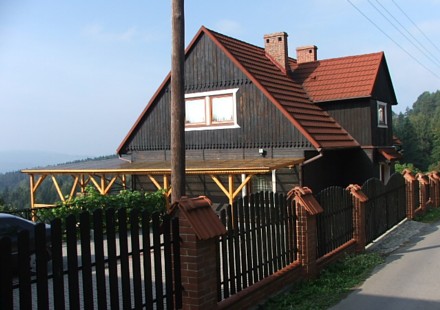 The house seen from the east.

Excursions:
With Maków as a starting point, several – both shorter and longer excursions – are recommended:
Just outside the door: Hiking along the top of the Makowska Góra mountain and nearby smaller mountains;
Short excursions: car and hiking in the beautiful countryside with small mountains and valleys just north of Maków (Beskid Makowski) and south of the city (Beskid Zywiecki); Sucha Beskidzka (9 km) with beautiful old inn, swimming pool and castle with restaurant; by Zawoja (18 km) to Babia Góra National Park with the second highest (after Tatry) mountain range in Poland; Wadowice : pope’s birthplace with museum (29 km); Lanckorona: old (12th century), picturesque village with well preserved pretty houses and castle ruins from 14th century (approx. 27 km); Rabka-Zdrój – spa town, where there is also an amusement park “Rabkoland” (for the whole family and not least the children) (30 km).
Longer excursions: The big city Krakow , the cultural capital of southern Poland, a city with atmosphere and many architectural sights (62 km.); Zakopane (71 km), the destination for tourists who want to try out some of the numerous excursions in the unique Tatra Mountains; Oświęcim (German: Auschwitz) (58 km): KZ camp museum; pilgrimage place Kalwaria Zebrzydowska (41 km via Wadowice) with famous monastery and pilgrimage park; Wieliczka (70 km) (old famous salt mine with museum); Żywiec – with large artificial lake (41 km).

Riding school:
A riding school, run by the married couple Andrzej and Agnieszka Stopka, is located on the same mountain road as the holiday home, but in the Jurki settlement – approx. 2 km in an easterly direction. After arriving at the house you can contact the school with 14 horses. After a few hours of teaching, you can be allowed to ride out in the beautiful countryside. 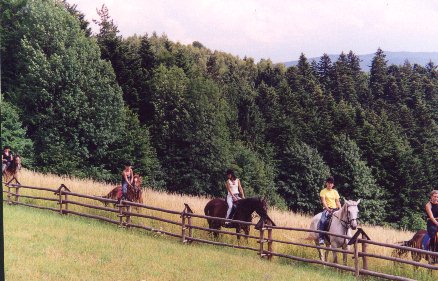 Price per accommodation: DKK 160 per night. person per wet incl. breakfast.
Opening season: May-September – during the periods when the owner is in the house.
Prior inquiries about accommodation by e-mail are made to the address below.

You can spend several nights on Bed & Breakfast terms. Meals during the day – in addition to breakfast – may be consumed in the city.