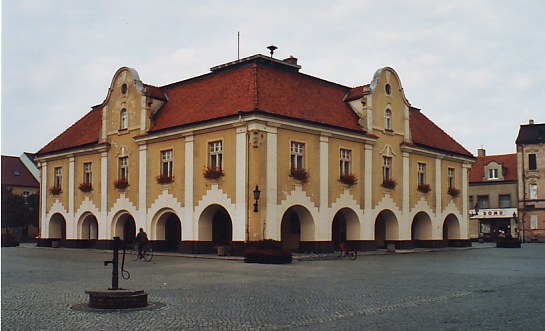 Jarocin is located in the great Polish lowlands southeast of Poznań. The city is a traffic hub for rail lines from Lower and Upper Silesia to West and East Pomerania; Here also south and northbound main roads (Nos. 15 and 11) meet east and westbound (Nos. 11 and 12).
Jarocin is first mentioned in a document, dated in Poznań on November 30, 1257, in which the great Polish prince Bolesław Pobożny assigns the city of Jaroczino as well as 13 villages and various privileges to Janek Zaremba. This Janek Zaremba held several high positions in Wielkopolska; he was thus county clerk in Gniezno and Kalisz and later the castle in Kalisz.
The town's name comes from the Slavic, old Polish personal name Jarota.
Over the centuries, the city changed owners several times. After the Zaremba family, the town was owned by the genera Górski, Jarocki, Przyjemski and Radoliński.
The city flourished especially in the second half of the 19th century. In 1875 the railroad came and in 1887 the district of Jarocin was established. The city got waterworks, sewerage, gasworks, etc.
In early November 1918, an uprising against the Germans took place, an event that was part of the extensive Greater Poland Uprising.
Under Hitler's rule, large numbers of Polish residents were displaced and replaced by German refugees, who in 1944 made up 35% of the population.
After World War II, Jarocin became a major industrial center in industries such as the furniture, machinery, wood and textile industries. In 1980, the first festival under the name of the General Polish Revision of Music for the Young Generation was held here, which was the beginning of the largest annual rock festival in Eastern Europe, an event held continuously until 1994.

City Hall was built 1799-1804 but later remodeled. The building is the seat of the city authorities as well as the regional museum. The town hall is in the middle of the square, which was also the center of the medieval city.

Church of Saint Martin (Kościół Św.Marcina)
This parish church is mentioned as early as 1257 and is located on the northeast corner of the square. The present building was built before 1610 as a Gothic, one-ship church. The south-facing chapel contains a mausoleum for the genus Radoliński. In 1773-75 the church underwent a Baroque-style conversion. In 1838 a tower was built to the west. The church complex is surrounded by a wooden pillar from 1910. On the south wall of the church there is a sundial, dated 1910, with the Latin inscription: UMBRA TRANSIT – LUX MANET. 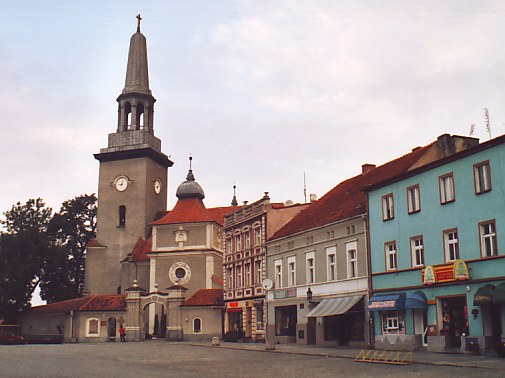 The square of St. Martin's Church

Radoliński Mansion
is listed in 1847-53 in English, neo-Gothic style. The building was expanded with a side wing in 1911-12. Until 1945, the mansion was the seat of the German branch of the genus: von Radolin. Now the building houses two higher schools as well as the public library.

“Skarbczyk”
in the city park are the remains of the late medieval castle from the 15th century, erected on which the burnt-out residence of the Zaremba family had stood. Until the end of the 18th century. was the building inhabited by the alternating owners of Jarocin. For now, the building serves museum purposes.

The ruins of the Holy Spirit Hospital Church
The building was built in Gothic style at 1516, but has been a ruin since 1833.

Church of Saint George (Kościół Św.Jerzego)
This former evangelical church on Wrocław Street was built in 1847-48.

Stadsparken
The park is a landscape complex of approx. 30 ha., Projected by Piotr Józef Lenne in 1845. Here you will find one of the longest antelope in Europe, many ancient trees, including magnificent oak and Weymouth lighthouse and two picturesque ponds. 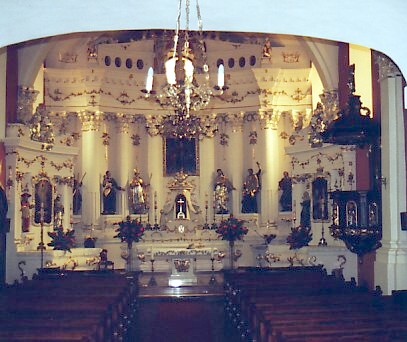 Jarocin. St. Martin's Church. From the inside of the church

In addition to Jarocin, the Jarocin District comprises the following municipalities: Jaraczewo, Kotlin and Żerków. The area is both naturally and historically attractive. The authorities are looking to expand the possibilities for active holiday forms for both citizens and tourists. Farm holidays are offered in several places and fishing and horse riding can be practiced.

Jaraczewo (15 km west of Jarocin) is known since 1324 and became a market town in 1519. In the city, many felt makers worked. The city rights were lost in 1934, however. The parish church was dedicated to Maria Magdalena and is a late classicist building with a late Baroque-style tower.

Śmiełów (16 km north of Jarocin). – The castle in the village of Miełów was in 1831 the residence of the great Polish poet, Adam Mickiewicz. The castle, built in 1797 in the classicist style and over a horseshoe-shaped floor plan, today houses a museum for Mickiewicz.

Wilkowyja (5 km north of Jarocin). – The village of Wilkowyja is one of the oldest settlements in Wielkopolska. The oldest traces of settlements date back at least 2500 years. The river Lutynia, which runs through the village, is a tributary to Warta. On the river stands a mill, as the author Jarosław Iwaszkiewicz has described in the story “Młyn nad Lutynią” (“The mill at Lutynia”).

Booking.com
Jarocin (Official site of the municipality) – with practical information for tourists

Jarocin (Official site of the municipality) – with practical information for tourists 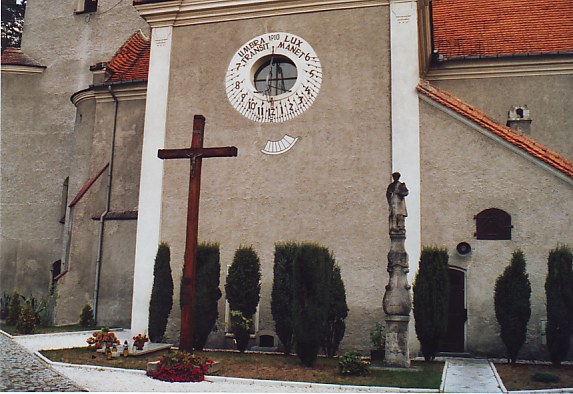 Jarocin. St. Martin's Church. Sun clock on the south wall of the church

Jarocin (Official site of the municipality) 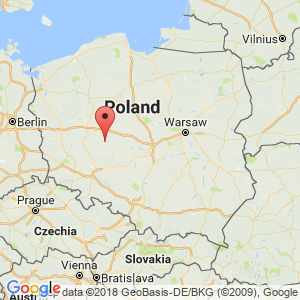