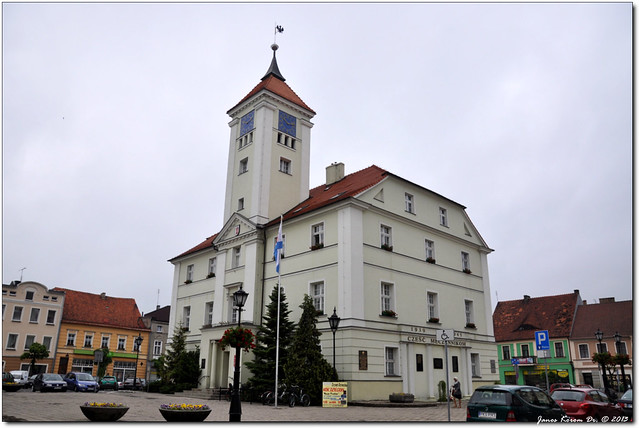 Kościan is located in western Poland, southwest of Poznań.

From 1242 the first mention of the town's name is known here in the form “Costan”. The city gained market town rights in the second half of the 13th year. In the beginning, Kościan was owned by the great Polish princes, from 1296 by the Silesian princes of the Głogów line and from 1332 the city was owned by the Polish king. At the end of the 14th century. became the capital of Kościan in a district (powiat) at the head of which stood a royal appointed starosta. The town became known for its dress making; the products were delivered to the royal court, and some went for export. During the Swedish wars in the 1600s, the town was burnt down and the castle demolished. The castle (from the end of the 14th century) has not since been rebuilt. There are no remains and the site has since been built a hospital. From 1793 the city belonged to Prussia, from 1919 again to Poland. During the German occupation in World War II, many of the city's inhabitants were murdered, including patients in the psychiatric hospital. After the war, the city was rebuilt and new businesses emerged, including a slaughterhouse and a tobacco factory, just as the sugar factory resumed business. In 2011, the local dairy was taken over by the SM Mlekovita group, which still operates it.

Virgin Mary's Church of the Assumption
The history of the parish church in Kościan dates back to ca. The building of the present church began in 1333. In the 15th century. side ships and six chapels were built. The tower collapsed in a fire in 1547. It was rebuilt but crashed again during a hurricane in 1711, and it has not been rebuilt since. The church is in Gothic style, built in brick in a Vendish connexion.

The Lord Jesus’ Chapel
This church was originally a monastic church that belonged to the Dominican Order. The church and monastery burned in 1503 and during the Swedes' attack in 1655 the church was burnt down again. It was rebuilt as a chapel that received its present appearance in 1905-1908. 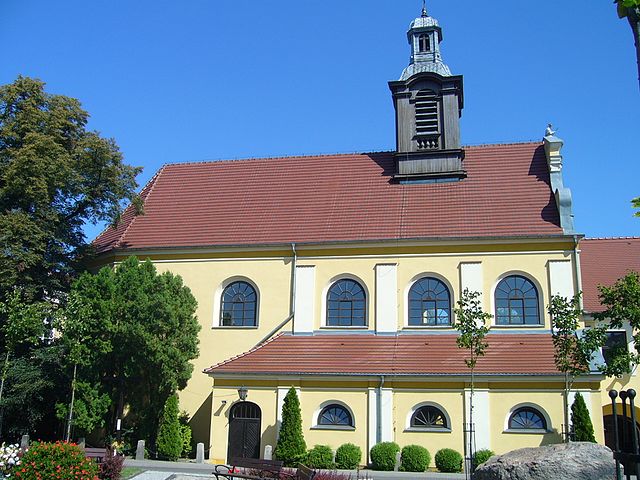 Holy Spirit
The church probably existed before 1385 and was built outside the city wall, in the Poznań suburb. In 1385, there was at this church a refuge for the old and the sick, called the Holy Ghost Hospital. The church was rebuilt to its present form (Gothic style) in the middle of the 15th century. but with some extensions in the 17th century.

City Hall
The first mention of a town hall in the city dates from 1385. The current town hall was built in the early 19th century. and remodeled in an eclectic style in the early 20th century. The building is on 3 floors with a square tower. The former town hall now houses a regional museum.

The former Bernadine monastery
The monastery was built in 1605-1611. After the abolition of the order in 1830, a considerable redevelopment took place and the buildings were used for many different purposes in the following years. Today, these buildings house the County Neuropsychiatric Hospital. – Of the monastery wall from the 17th century. fragments still remain.

Bymuren
Of the city wall from the 14th-16th century. remains are still found.

The old windmill
The mill is of old type with four rotating blades. It was built in 1714.

The water tower
The Kościan water tower is architecturally one of the most original buildings of this type throughout Poland. The water tower has been an integral element of the city's water supply system. It was built in 1908 by engineer Xaver Geisler. Visitors have now set up a climbing wall. In addition, interested people of all ages can access the astronomical observatory that is housed in the tower. From time to time, popular scientific lectures are also held here.

channels
Between Kościan and Wolsztyn to the west is a larger system of canals in connection with the Obra River – a tributary to Warta. The canals were excavated 200 years ago. Through the Kościan, the Obra River runs, here also called the Kościan Canal. North of the city, it continues in the Mosina Canal, which has its outlet in Warta. Obra and the canals are suitable for large stretches of kayaking. In addition, fishing in the river and canals is practiced. 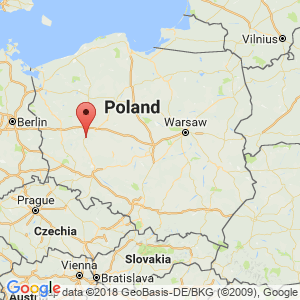