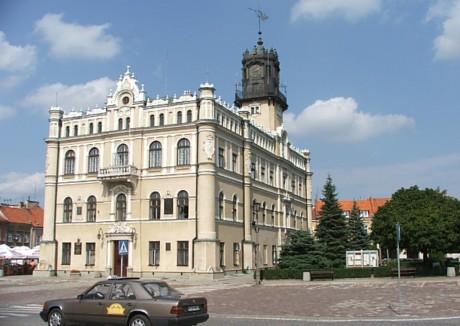 Town Hall in the square in Jarosław

Jarosław is located in the eastern part of the Podkarpacie region, near the Ukrainian border.
Dating back to the younger Stone Age, over 2000 years before our time, there were settlements here in the San Valley. Later it is known that the West Slavic tribe of Lędzianie lived among other things. on this property. The first written source to refer to a fortified city in this place dates from 1152. Some first city privileges are believed to have been granted in 1323, while the granting of market town rights (by Władysław Opolczyk) can safely be dated to the year 1375.
In 1387, Queen Jadwiga transferred the town of Jarosław to Jan of Tarnów, whose family owned the town until the end of the 14th century. Later owners of the city were the genera: Sieniawski, Zamojski, Koniecpolski, Sobieski, Sanguszko and Czartoryski. During the Czartoryski genus as the last owners, the town was bought free in the 19th century.
Jarosław had a favorable commercial position, namely in a place where the trade routes from Silesia to the Russian Empire and from Gdańsk to Hungary intersected; including the location on the San waterway was also very convenient. In 1501, the city was given the right to store goods, which motivated traveling merchants to stay in the city and exhibit their goods.
Especially the 16th and 17th centuries. were favorable times for Jarosław. The markets that take place here three times a year were among the largest in the country and also significant in the European context. In connection with the markets, many traders and guests could come to the city, up to 30 thousand – against 3 thousand permanent inhabitants of the city for the rest of the year. Besides the trade, of course, this also meant good income for the city's craftsmen.
Jarosław was not saved for warlike events in the course of time: thus the city was taken by the Swedes after an attack in 1656. In 1704 the city defended itself against Karl XII’s strengths. And in September 1939, Jarosław defended himself against the German army.
The time after 1945 has been predominantly a time of prosperity and a period of increasing industrialization. Older companies, such as the slaughterhouse and sugar factory were expanded, and new businesses were added, including a knitwear factory and a glassworks. Jarosław is also increasingly a cultural center.

There are many beautiful buildings in Jarosław, both worldly and ecclesiastical, including the Benedictine Sisters Monastery and the Dominican Monastery.

Recurring cultural events in the city include an international festival for older music (in August), a festival for Slavic folk ensembles (in June) and a city party (Dni Jarosławia) in June.

Church of the Lord of Transfiguration – Greek Catholic Church (Cerkiew Greckokatolicka Przemieniena Pańskiego)
The church is an important sanctuary and pilgrimage site for Orthodox Christians in Poland. In this place was formerly a castle, which was later converted into a private Renaissance-style residence. During the second half of the 17th century. the building fell into ruins and by the end of the century it was demolished. The Greek Catholic Church was built 1717-1747, primarily through financial support from the Wapiński family in Jarosław. However, the church was rebuilt in 1911-12 into a three-pseudo-Byzantine-style building. On the facade is a sculpture: “The Crucifixion” by Orkusiewicz. 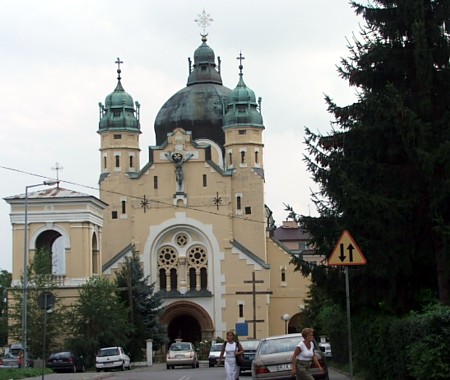 The Greek Catholic Church and “konkatedral” in Jarosław

City Hall
The first town hall in the city dates from the 15th century. and was probably of wood. The oldest parts of the current building are from the beginning of the 17th century. After a fire in 1625, the town hall was rebuilt into a two-story Baroque-style building. Under Austrian rule, the building was used as a military warehouse in the years 1782-1852, which caused considerable damage. In 1852, the city bought the building of the Austrian state and renovated it in neo-Gothic style. Since then, the town hall was basically rebuilt in 1895-96 so that it now appeared in a neo-Renaissance style. The building, now in four floors with a tower to the southeast, has retained this character to this day. 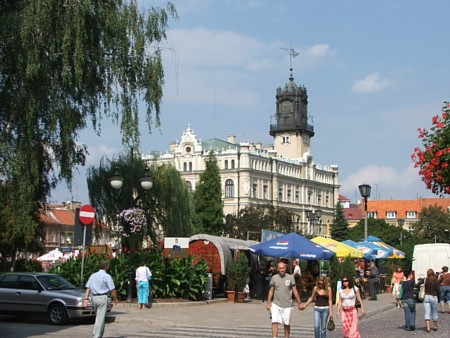 The square with the town hall seen from the corner of Grodzka street. See also the image at the top of the page

Building Sokół
This impressive and strikingly ornate building was originally the seat of the gymnastics association “Sokół”. It was built in 1899-1900. The building now houses the Municipal Cultural Center. 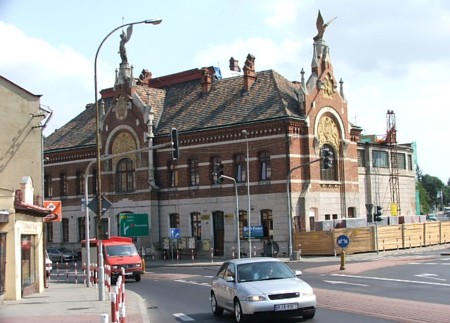 The former Sokół building in Jarosław

Holy Spirit Church (Kościół Świętego Ducha)
In this place was formerly a wooden church church, about which it is known to have been enlarged in 1462. The present church dates from 1689-90. The presence of gunshot wounds in the building indicates that it has been linked to the city's defense system.

Orsetti’s House
This very beautiful and distinctive house in the square, from the 16th to the 18th century, begun in 1581, is equipped with archways and attics over the main chasm. It is named after one of the owners, Wilhelm Orsetti – an Italian, and it belongs primarily to the examples of Renaissance architecture in Poland. The building, which houses a museum since 1945, is (of course) preserved, and multicolored decorations from the 17th and 18th centuries are preserved on the first floor of the old grocery store. The museum has exhibitions on the history of the city and the bourgeois culture of the city. 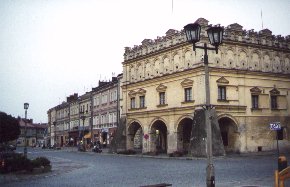 Rydzik’s House
This house on the square from the 16th-17th century. represents the best-preserved townhouses that feature a covered, inner courtyard. The ground floor was intended for commercial purposes and 1st floor for residential purposes. Under the house there are basements in three levels, former grocery stores.

The underground tourist route
In the above Rydzik’s house begins The Underground Tourist Route. Basements and underground corridors are made available to the public. These are rooms and hallways with a total length of 180 m and with a level difference of 8.5 m. 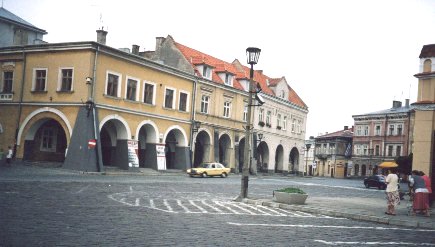 The east / northeast side of the square with Rydzik’s House

The city's well
The city's old well on the square was uncovered in 1965 in connection with the execution of foundation work. The part of the well now seen above the ground is thus constructed after 1965. 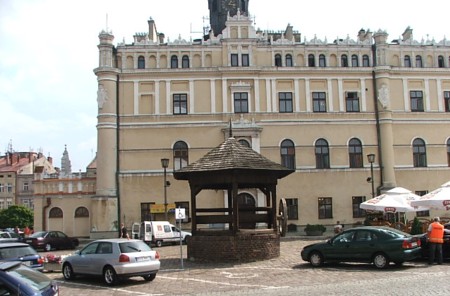 The city's well with the town hall as a backdrop

Benedictine
The former fortified monastic complex belonging to the Order of the Benedictine Sisters became in the first half of the 17th century. founded on a ridge where formerly a medieval fortification existed. The early Baroque-style monastery, dedicated to St. Michał and St. Stanisław, was built in 1614-24 and rebuilt in 1784. Following the abolition of the Order in 1782, the monastery was used for military purposes and during World War II there was a prison and execution site. The buildings burned in 1944. The rebuilt monastery served as boarding school for many years. The monastery complex is now the property of the Benedictine Nuns; however, the reconstruction is not completely completed.

Collegiate Church of the Body of God (Kolegiata Bożego Ciała)
This very impressive early Baroque building is decorated with figures of saints performed by Tomasz Hutter as well as by the patron saints of the church: the Apostle John and John the Baptist.

The old fortification of the city: the city wall, the moat and the Kraków gate
Near Grodzka Street are remains of the former city wall, the moat and of one of the city gates: Kraków Gate (Brama Krakowska). Preserved are portions of the moat, parts of the wall and ruins of the lower floor of the gate building. The Kraków gate dates from the first half of the 16th century. From here, the city wall extended south and north around the city. The fort also included the city gate Brama Pełkińska (to the northwest), the castle (to the east) and the city gate Brama Lwowska electricity. Przemyska (to the south). 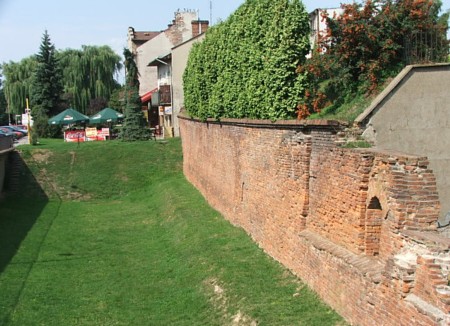 Virgin Mary Church and Dominican Monastery
The monastery complex, formerly part of the Jesuit order, dates from the 17th century. The church was further expanded from 1698 to 1713 by architect Jakub Solari. In the second half of the 18th year. the towers were added. The church's interior dates from the 18th century. with sculptures by Tomasz Hutter. At the main altar is a Gothic Pieta. In the monastery you see interesting polychromies, including prospects of Jarosław, Lwów and Toruń. Next to the church is an underground well. After the repeal of the Jesuit order, the complex was handed over to the Dominicans. 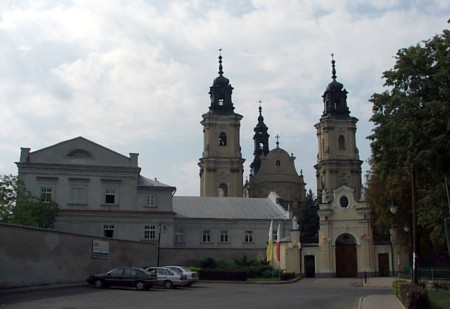 Dominican Monastery and Church of Mary in Jarosław, west of the Old Town

The Franciscan Reformist Monastery
The monastery and monastery church (in Baroque style) was built 1710-1716. The money was donated by a citizen from Jarosław, Antoni Kwolek and Franciszek and Eufrozyna Zawadzki. The complex was built by Martyn by Kęty after drawings by Tomasz Bellotti. The floor plan is rectangular with an open courtyard between the monastery buildings and the church.

The former Jesuit College
Construction of the college began in 1580. Originally, a four-story building connected to the church, with archways on two floors, opened onto an inner courtyard. After the order was repealed, the buildings were used for military magazines and barracks. Today, only one of the building wings remains.

Market Halls (Miejska Wiata Targowa)
Construction of the market hall began in 1913. Construction was interrupted by World War I and was not completed until 1924. The building, located on the eastern side of Grodzka Street, near the square, has served the same purpose to this day. 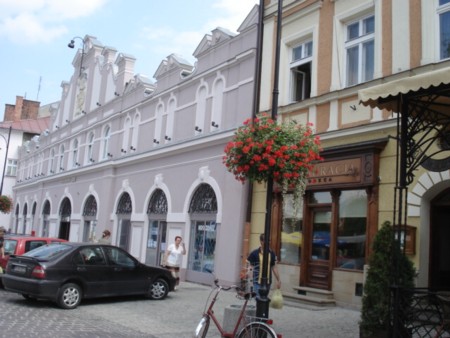 The east side of Grodzka Street, the city's former main street, with the Market Hall

The town of Jarosław is located on the great river San; this river, which is an eastern tributary of Wisla and which flows through much of Podkarpacie, runs at this location from the southeast to the northwest and roams the eastern part of the city.
To Ukraine, drive from Jarosław via the border crossing points Korczowa (38 km to the east) or Medyka (46 km to the southeast – via Przemyśl).

Booking.com
Jarosław (Official site of the city) – with versions in 104 languages and with practical information for tourists
Powiat Jarosławski (Jarosław district – in 103 languages)

Eating Out:
Jarosław (Official site of the city) – with versions in 104 languages and with practical information for tourists
Powiat Jarosławski (Jarosław district – in 103 languages) 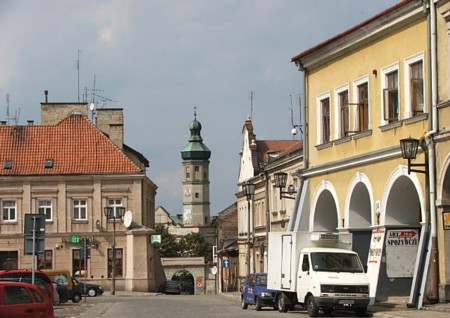 The northern corner of the square in Jarosław 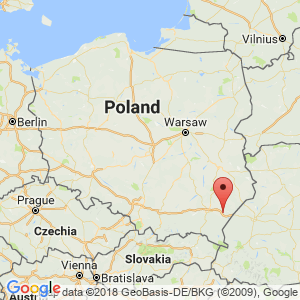