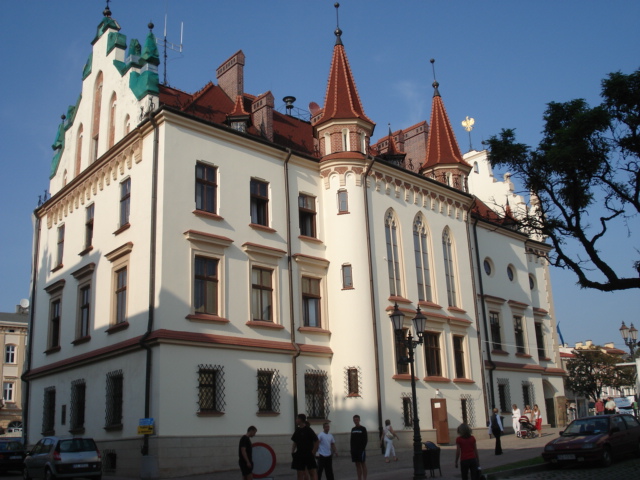 Town Hall at the square in Rzeszów 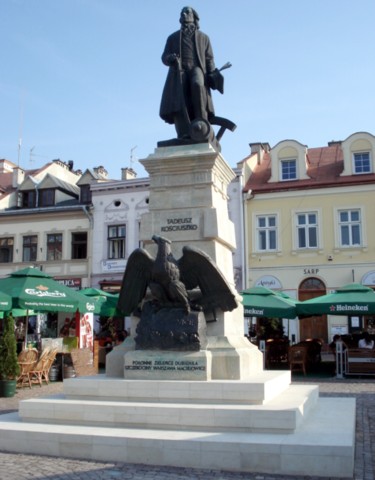 The Kościuszko statue in the square in Rzeszów

Rzeszów is the regional capital of the Podkarpacie region of southeastern Poland and as such is an administrative and business center for a larger area. The region's airport (connected to Warsaw) is also here, namely at Jasionka, north of the city.
The name Rzeszów comes according to the researchers of the Slavic first name Rzech or Rzesz. King Kazimierz the Great granted Rzeszów commercial property rights in 1354. The king handed over the town to Knight Jan Pakosławic, whose family then assumed the name Rzeszowski. The family Rzeszowski owned the town until 1583. In 1589, Mikołaj Spytek Ligęza became the new owner of the town. From 1638 the town is ruled by the genus Lubomirski. At the partition of Poland in 1772, the city and the whole region were occupied by Austrian forces. In 1845, Rzeszów became a free city, ie. no longer in private ownership. The relatively free political and economic conditions that applied to the entire province of Galicia during the Austro-Hungarian rule were conducive to the development of the city. In 1858 the railway line from Kraków was advanced to Rzeszów. In 1863 there was a rail link to Lwów. In the late 1930s’in the new Poland, a (still existing) aircraft factory was built manufacturing aircraft engines and a branch of H. Cegielski’s factory in Poznań, which produced air defense cannons. During World War II, the city was partially destroyed; many building monuments, homes and industrial establishments were laid in gravel. After the war, in 1950’the city center was modernized and new living quarters and more public buildings were built. From 1960’several higher education institutions were inaugurated in the city and in 2001 Rzeszów University started its business. 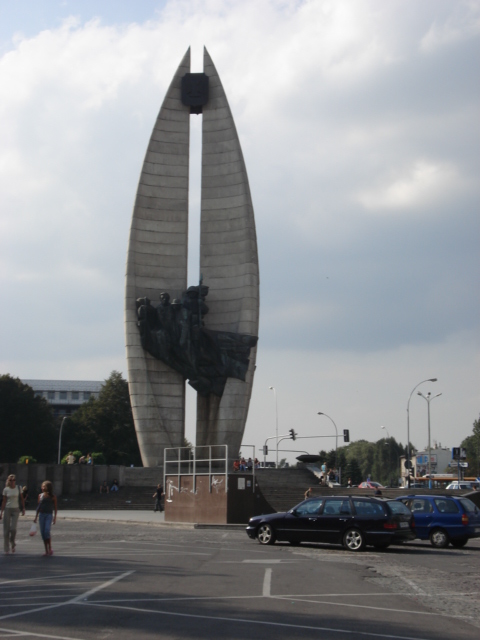 Memorial of the Revolutionary Action in Rzeszów

The parish church is from the 1st half of the 15th year. The parish church existed even before 1363, but the oldest church was destroyed during a fire around 1427. The oldest part of the present church, the Gothic choir, is probably from 1434. At the beginning of the 16th century. the church was fortified, ie. surrounded by an earthen wall. In 1754 the main ship was rebuilt and the side ships were added. These remodels and extensions were done in Baroque style.

Bernardinerklostret and the abbey church dates from the first half of the 17th century. The monastery was built, probably in the years 1624-29, on the foundation of an older church building from the 16th century. In 1898-1906 the buildings were fundamentally renewed and restored in 1978-79. – The founder of the monastery was the city's then owner, Mikołaj Spytek Ligęza. It was the founder's idea that the monastery church should be a mausoleum for his lineage. The monastery complex, which had a defensive character during the construction – which witnesses the previously preserved shooting corps – was to serve as a defense bastion in the city's fortification system created by Ligęza. The abbey church was built in the late Renaissance style, but with elements of Baroque style. 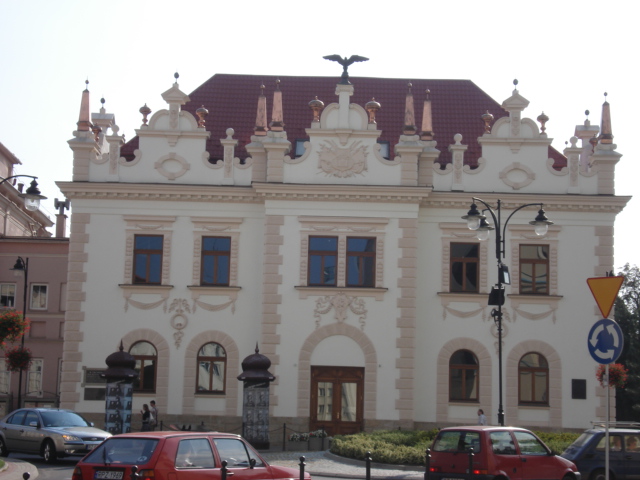 Lubomirski Castle is from the end of the 16th century. The building of the castle was started by the then owner of Rzeszów, Mikołaj Spytek Ligęza. The castle was built over a square, almost rectangular floor plan. Around the building was erected a ring wall of more than 1.5 m in thickness, which contained slabs. Construction continued under the new owners of the town, the Lubomirski genus. The castle was expanded and surrounded by a new fortification in stone with bastions. The expansion and the new fortifications were done according to drawings by Tylman van Gameren.

City Hall the square is probably built before 1591 and certainly on the foundations of a former building. The town hall building was in the 18th century. changed and subsequently appeared in a classicist style. 1897-98 the building was basically rebuilt and expanded, i.a. a third floor was added. 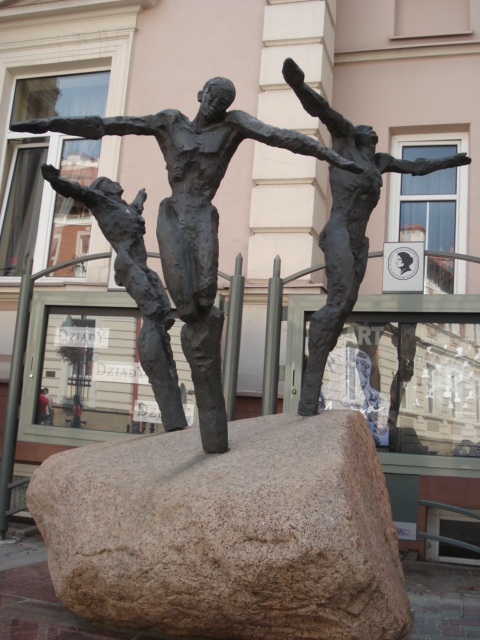 Sculpture in front of the Wanda Siemaszkowa Theater in Rzeszów

Synagogue of the old city is a smaller building with a characteristic tower and extensions. The synagogue is covered with a steep roof and the building style is baroque. The building was erected at the transition between the 16th and 17th century. The synagogue was destroyed during World War II and has since been rebuilt. Currently, the building contains the county archive.

Lubomirski family summer palace is listed at the transition between the 17th and 18th centuries, designed by Tylman van Gameren. It is built over an H-shaped floor plan and is in 2 floors with mansard roofs. In 1981-85, the former summer palace underwent a major restoration and was decorated for the purpose it now serves, namely as a branch of the Academy of Music in Kraków.

The underground tourist route. As craftsmanship and trade became more extensive in medieval Rzeszów and markets became commonplace, there was a need to build warehouses and sales halls, as was done in other cities. However, space in the square and around the square was very limited. Therefore, excavation and construction of underground spaces for these purposes began. The rooms, which were in 2 – some places 3 – levels and up to 10 meters depth, stretched below the square, the houses around the square and partly below the nearby streets. In addition to inventory, the underground spaces were also used as a refuge during attacks on the city. Some of the rooms have collapsed over time or have been remodeled. The remaining rooms have been reinforced during the restoration work of 1960’the ones onwards. The stabilized, underground spaces now form the underground tourist route. This route is 213 meters long and comprises 34 rooms. The oldest of the preserved rooms are from the 15th century. The route connects the northern, southern and eastern sections of the square. The entrance to the route can be found behind house no. 12 on the square; the exit is on the square itself near No. 19. There is access for groups under the guidance of a guide. The temperature below ground is approx. 8 degrees C. 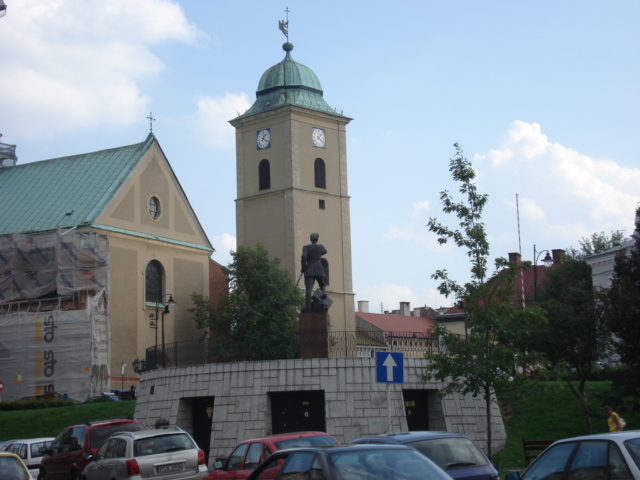 Booking.com
Rzeszów (The city's official site in about 102 languages) – with practical information for tourists 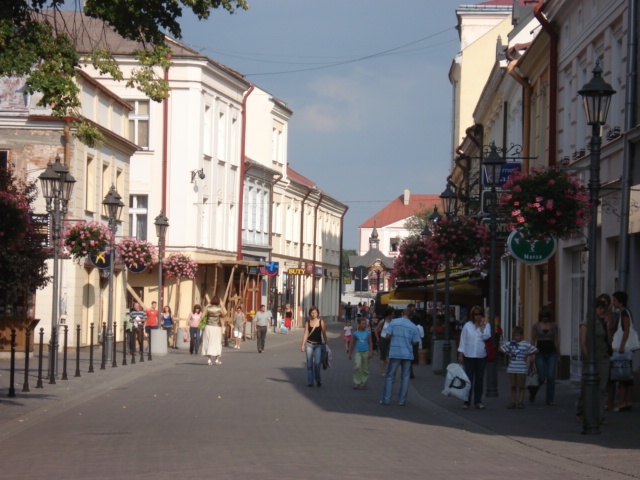 From the street ul. Jana Matejki looked towards the square with the old well of the city

Rzeszów (Official city of about 102 languages) 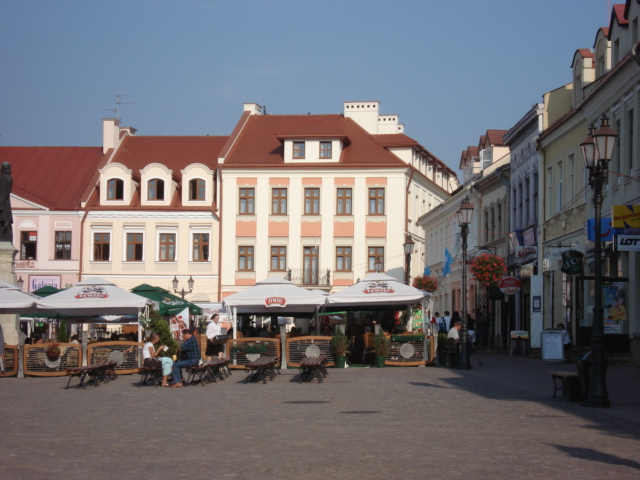 The southeast corner of the square in Rzeszów 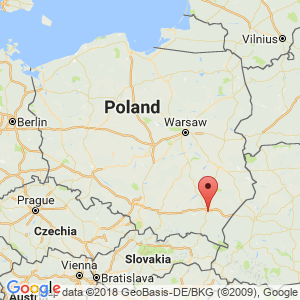