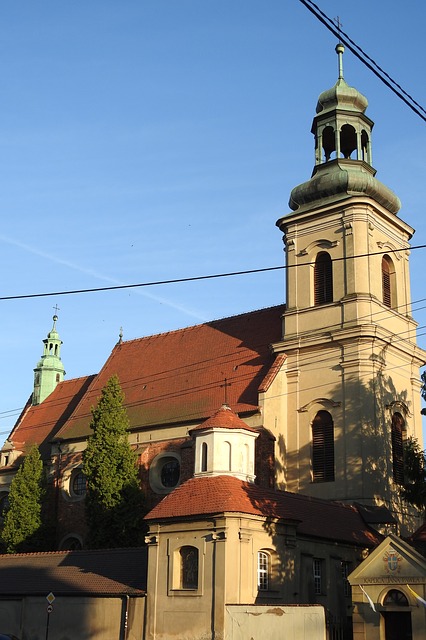 Franciscan Monastery Church in Wschowa. – Picture of satynek from Pixabay

Wschowa is located in the eastern part of the present Lubusz region, near the border of both Wielkopolska (to the east) and to Lower Silesia (to the south).

The town used to belong to the historic Wielkopolska region, and throughout history, the border with Silesia has been a few kilometers to the south. This location has had a good and bad impact on the development of the city. As the first written mention by Wschowa, historians recognize a bun from Pope Innocent II of 1136 addressed to the Archbishop of Gniezno.
The origin of the city was a fortification, a guard post that was supposed to help improve safety along the trade route from, among other things. Wielkopolska to the Czech Republic. By the fourteenth century, the city had already developed into a significant center of self-government and its own star cheese.
After being for a long time alternately in the hands of the great Polish and Silesian princes, it was conquered by King Kazimierz the Great in 1343 and placed under the Polish kingdom. In the following years, royal privileges were granted to the city, which included: gave the city's citizens freedom of duty. In 1404, Wschowa was given the right to coin and sell salt. The city's main food route, the clothing industry, developed strongly. Wschowa's woolen clothing was sold with the city's stamp of quality. in Russia.
Due to the growth of the city, in the 1600s, a new city began to be built outside the city wall, which soon acquired its own town hall and various institutions. At the same time, a paint shop was founded in the city. In addition to the city's own coin location, Wschowa also served a royal coin location.
Yet in the first half of the 18th century. Wschowa was a strong center, both economically and politically; for a time, the city was the seat of both the legislative and diplomatic activities of the Polish state and was compared with cities such as Kraków and Poznań.
After Poland's second division, the city was incorporated into Prussia. In the 19th century, a country road connecting Wschowa with Głogów and Poznań was also built, and railway lines to Głogów and Leszno. During the same period, several new industrial companies were founded, including: a sugar factory.
After World War I, Wschowa remained within Germany's borders. In 1939, at the outbreak of World War II, Polish forces attempted to conquer the city, but unsuccessfully. After 1945, Wschowa was again within Poland's borders. 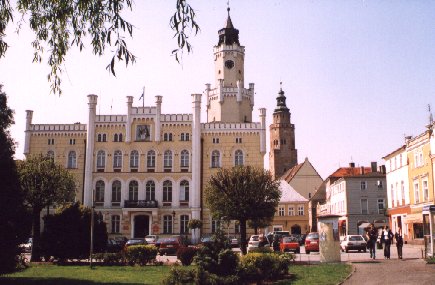 Torvet (Rynek) .
The building of the city's central square is reminiscent of the main square of Krakow and the squares of many Silesian cities. In the middle of the square stands the town hall.
City Hall (on the square)
The first Gothic and partly wood-built town hall burned in 1529; however, the walled sections of the building, including the distinctive monumental tower, remained standing. Its present, neo-Romanesque character gained the town hall in 1860-70, in which connection the size of the building was greatly increased. The town hall is on 3 floors with the tower located in the northwest corner. The town hall tower is basically square, but from the 2nd floor it is octagonal; The third floor, which is narrower, is equipped with a hallway.
The parish church (at Plac Farny)
St. Stanisław Church is mentioned for the first time in 1435. After the fire in 1685, it was rebuilt after the design of Pompeo Ferrari, an architect associated with the Leszczyński family in Rydzyna, and incidentally supported the construction of several churches in Wielkopolska. The building is a wooden baroque-style basilica, but with handed Gothic style features and an impressive tower of 68 m in height. The interior of the church is richly equipped. On the west wall is a valuable picture from the 18th century. with a panoramic view of the city from that period.
The Old City Evangelical Church (“Church of Christ the Baptist”)
The church was built in 1604 by the city wall. For a period after 1945, the church was not used for ecclesiastical purposes but as a magazine. It was originally built in Gothic tradition with a late Baroque interior. The associated building complex originally consisted of the church, the church tower (a former defense tower), the school and the vicarage.
The Franciscan Order's Abbey
This monastery complex at ul.Klasztorna was formerly part of the Bernardine Order and is located outside the Old Town. The Bernardine Order came to Wschowa in 1457 and built here a church and a monastery; the first buildings were finished in half-timber. In the mid-1500s, Protestants took over the church and the monastery burned. The Bernardine monks moved to Kościan, but in the mid-1600s they returned to Wschowa, where they rebuilt the monastery and church. After the abolition of the monastery in 1827, a school was set up in the monastery building. In 1945, when Wschowa was again part of Catholic Poland, the monastery complex was taken over by the Franciscan Order.
The city wall.
The city wall and the moat formerly surrounded the entire city. The defense system was approximately circular and now surrounds the Old Town area. Parts of the wall are still preserved, which in their time (14th century) were probably built as a replacement for an even earlier fortification of wood and soil. The wall was repeatedly expanded and reinforced in the following centuries. The wall is mainly made of natural stone, but partly of brick. In some sections the wall is preserved at a height of 2-4 meters above the level of the moat. Two gates led through the fortifications and into the city center: from south Brama Głogowska and from north Brama Polska. In the 19th century, the gates and part of the wall were torn down. However, most of the wall is preserved together with the gate tower at Brama Polska, which in the 17th century. found use as a bell tower at the evangelical church.
The Evangelical Cemetery.
Built in 1609 outside the city wall, this cemetery, with all its construction (possibly with Italian example), its green spaces and beautiful tomb sculptures, is a prime example of 17th-19th century Protestant cemetery art. and at the same time a nice and peaceful place to wander around. In addition, the tombstone inscriptions bear testimony to the city's history.
Borgerhuse.
In Wschowa, there are the largest number of conservation-worthy townhouses in Wielkopolska, erected with the gable facing the street, with beautiful facades and richly equipped interiors. Among the most interesting are 3 Renaissance stone houses, built in the 16th century. One of these now houses the Museum of the Wschowa area.
Szlichtyng Mansion
by ul.Głogowska is from the end of the 18th century. and now houses a music school.

Przyczyna Górna (3 km V)
The Gothic Church of Przyczyna Górna is surrounded by a wall; In the interior of the church are valuable paintings from the 15th and 16th centuries.
Dębowa Łęka (4 km away)
The church in this village contains a Gothic sculpture of Madonna with the Child, dating from the 15th century. See also the Brodowski mansion.
Osowa Sień (4 km n)
The Gothic Saint Fabian and Saint Sebastian Church date from the 14th century. with a wooden tower from the 18th century; Here you can see graves of the Ossowski family. This village was home to the Dołęga-Ossowski genus; near the church is the classic manor house from the early 19th century, surrounded by a large park with a canal and an artificial island. 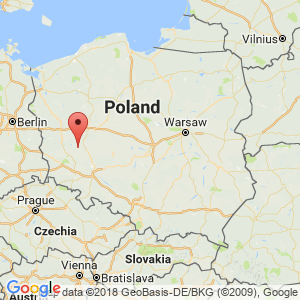